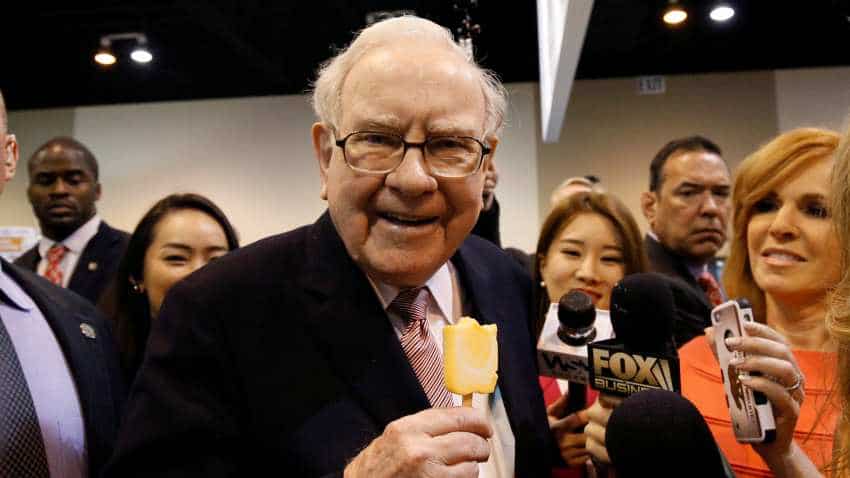 Berkshire also invests in JPMorgan, and boosted its holdings in the largest U.S. bank by 19 percent in the first quarter to 59.5 million shares, worth $6.02 billion. Image source: Reuters

Warren Buffett`s Berkshire Hathaway Inc said it owned $860.6 million of Amazon.com Inc shares at the end of March, after the billionaire admitted to underestimating the online retailer and its Chief Executive Jeff Bezos. The size of the investment was disclosed in a regulatory filing detailing Berkshire`s U.S.-listed stocks as of March 31.

Wednesday`s filing includes investments by Buffett and his portfolio managers Todd Combs and Ted Weschler, but does not say who bought and sold what.

Buffett told CNBC this month that the 483,300 share Amazon investment, which would now be worth $904 million, was made by Combs or Weschler, and that he had been "an idiot" for not investing in Amazon himself.

The investment tightens the relationship between Buffett and fellow billionaire Bezos, whose companies teamed up last year with JPMorgan Chase & Co to create a venture, Haven, to reduce their employees` healthcare costs.

Berkshire also invests in JPMorgan, and boosted its holdings in the largest U.S. bank by 19 percent in the first quarter to 59.5 million shares, worth $6.02 billion.

Bezos has also drawn praise from longtime Berkshire Vice Chairman Charlie Munger. "I don`t mind not having caught Amazon early. The guy is kind of a miracle worker," Munger said at Berkshire`s annual shareholder meeting on May 4, referring to Bezos. "It`s very peculiar. I give myself a pass on that."

These have included Berkshire`s $32.1 billion purchase in 2016 of industrial and aircraft parts maker Precision Castparts, and a stake in Apple Inc worth close to $48 billion.

Berkshire also owns more than 90 businesses such as the BNSF railroad and Geico auto insurer.

It often buys stocks when buying whole companies appear too costly. Buffett said on Feb. 23 that prices were "sky-high for businesses possessing decent long-term prospects." The Standard & Poor`s 500 has since risen 2.1 percent.