Warren Buffett boss of Apple? Oracle of Omaha loving crisis in iPhone maker; here is why 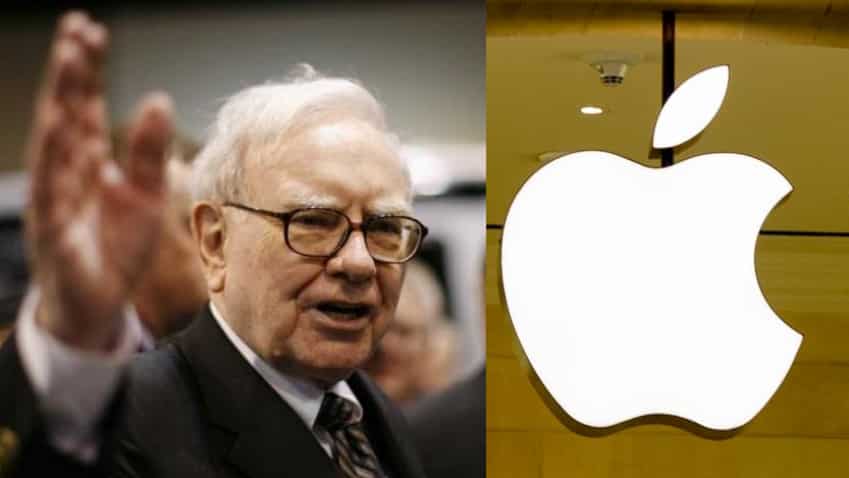 Even though analysts and experts are trimming down their price target for Apple, yet Buffett’s faith is unshaken. Photo: Reuters/IANS

The 42-year old Apple Inc, co-founded by the legendary Steve Jobs, has taken a big U-turn after becoming the world’s first $1 trillion company. Yes, the iPhone-maker is in a crisis. The outlook ahead for Apple has now become bleak and scary as investors continue to lose faith in this iconic tech company. Apple, which is one-of-a-kind stock on exchanges, has dropped by nearly 37% on Nasdaq in just last three months (between October to December) of 2018. The beginning of 2019 was gloomy for Apple, as on Wednesday it finished lower by 7% at $146 on the index. But Guess what! The drop in Apple shares is a wish come true of the world’s biggest equity king, the Oracle of Omaha, Warren Buffett. The ace investor has not once, but many times indicated his wish for Apple shares to slip as much as possible so that he can make more buying in the iPhone maker via his company Berkshire Hathaway.

Yes, it is no secret that Apple shares have always been close to Warren Buffett's heart. Another one of favourites was Coca-Cola.

Why are Apple shares in a crisis? Apple chief Tim Cook has blamed the revenue cut on slow iPhone sales in China market.

What adds to problems is that the technology titan has announced a revenue cut for the first time in two decades and this is, much to everyone's concerns, due to slowing iPhone sales, which was once upon a time one of the most loved smartphones. In fact, just like everyone has a dream to buy a house and car of their own, many also add iPhones in a must-have category.

For outlook ahead, analysts at Wall Street have lowered Apple’s price target. As many as four firms have slashed their price target and that too by more than 15%.

Earlier, analysts at Jefferies cut the iPhone maker’s target price to $225 from previous $265, however, it still maintained its buy call. Other firms like Citi, Morgan Stanley and UBS have also followed similar trends.

In short, Apple’s journey looks like terrible going ahead.

However, none of this is of any concern for Warren Buffett, as he sees a bigger picture in Apple. In fact, Apple is the centerpiece of Buffett's portfolio.

Buffett, in a Reuters report, clearly showed happiness, saying, he would love to see Apple Inc shares decline in price so that he could buy more!

This is despite the fact that it would not be wrong to say that Buffett is losing some hefty money because of Apple’s share price drop.

Shockingly, as per CNBC report, Buffett is sitting on approximately $2.8 billion loss over his position in the company.

Buffett who once avoided exposure to any tech company because, as he said, he did not understand them, still could not resist Apple shares.

However, his knowledge about the sector and tech company in particular grew so much that, much to your surprise, Buffett was among those few investors who said that Apple would be the first company to touch the whopping $1 trillion mark in valuation.

During the third quarter of 2018, Buffett through Berkshire Hathaway increased his holding in Apple Inc by another 522,802 shares. Now, Berkshire has about 252.5 million of Apple shares. Notably, Apple accounts for about 25.77% of Berkshire’s portfolio, which was higher compared to 23.84% in previous quarter, as per Investor’s Business Daily.

Apple found favor in eye of Buffett way back in 2016, when the company’s stock was trading between $93 and $110. During the period over the $1 trillion mark, it was surely, Buffett who made some big money from Apple.

However, even though analysts and experts are trimming down their price target for Apple, yet Buffett’s faith is unshaken.

Not only this, Buffett once told in 9TO5MAC report, “I don’t focus on the sales in the next quarter or the next year. I focus on the hundreds and hundreds and hundreds of millions of people who practically live their lives by it,” Buffett said referring to the iPhone. “And if you look at that little piece of whatever it is, it’s some of the most valuable real estate in the world.”

Will Buffett’s dream of owning 100% of Apple come true? The jury is still out on that, but how things pan out from here would be thrilling to watch.