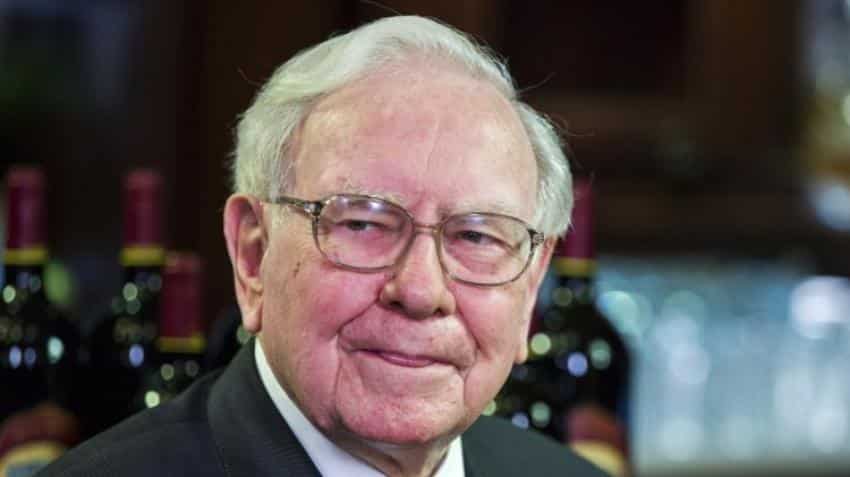 The Oracle of Omaha, as Buffett is popularly known, has once again beat the S&P 500. Image source: Reuters
Written By: ZeeBiz WebTeam
RELATED NEWS

The widely-followed annual letter by Warren Buffett is finally with us, and it contains a number of investing tips for common investors.

The Oracle of Omaha, as Buffett is popularly known, has once again beat the S&P 500 with the Berkshire Hathaway quoting $65.3 billion net worth in 2017, which increased the per-share book value of both Class A and Class B stock by 23 per cent, according to the annual report.

Other than some constant concepts of long-term approach to stock market, disdain towards mutual fund industry, and investing in great businesses with solid fundamentals, Buffett also explained the importance of inactivity.

Speaking about his "virtually cost-free" December 2007 pick, he explained why low-cost index fund tracking the S&P 500 index would post better returns over a 10-year span than five funds that invest in other funds and are run by high-fee fund managers. He told the S&P 500 won handily, posting average annual gains of 8.5 per cent, topping those five fund portfolios handily between 2007 and 2017.

"Indeed, Wall Street “helpers” earned staggering sums. While this group prospered, however, many of their investors experienced a lost decade," he said.

2) Bonds riskier than shares in the long-term

Buffett said it is a "terrible mistake" for investors with long-term horizons - among them, pension funds, college and endowments and savings-minded individuals - to measure their investment "risk" by their portfolio's ratio of bonds to stocks.

"There is simply no telling how far stocks can fall in a short period," Buffett said. "As an investor's investment horizon lengthens, however, a diversified portfolio of US equities becomes progressively less risky than bonds, assuming that the stocks are purchased at a sensible multiple of earnings relative to then-prevailing interest rates."

As is widely known, for Buffett, technicals and derivatives are "financial weapons of mass destruction,". He continued to hold that belief.

"Charlie and I view the marketable common stocks that Berkshire owns as interests in businesses, not as ticker symbols to be bought or sold based on their “chart” patterns, the “target” prices of analysts or the opinions of media pundits. Instead, we simply believe that if the businesses of the investees are successful (as we believe most will be), our investments will be successful as well," Buffett said in the letter.

"Sometimes the payoffs to us will be modest; occasionally the cash register will ring loudly. And sometimes I will make expensive mistakes. Overall – and over time – we should get decent results. In America, equity investors have the wind at their back," he added.

Buffett made a strong case against investing borrowed money in stock market because short-term fluctuations can hit the retail investor hard. "Even if your borrowings are small and your positions aren’t immediately threatened by the plunging market, your mind may well become rattled by scary headlines and breathless commentary. And an unsettled mind will not make good decisions," he said.

Referring to his 10-year bet, Buffett explained the importance of inactivity in the stock market. During the ten-year bet since 2007, the 200-plus hedge-fund managers must have made tens of thousands of buy and sell decisions, while Berkshire made only one investment decision.

"We simply decided to sell our bond investment at a price of more than 100 times earnings (95.7 sale price/.88 yield), those being “earnings” that could not increase during the ensuing five years," said the Sage of Omaha.

"We made the sale in order to move our money into a single security – Berkshire – that, in turn, owned a diversified group of solid businesses. Fuelled by retained earnings, Berkshire’s growth in value was unlikely to be less than 8% annually, even if we were to experience a so-so economy," he added.

"After that kindergarten-like analysis, Protégé and I made the switch and relaxed, confident that, over time, 8% was certain to beat .88%. By a lot," Buffett concluded.

Stocks in Focus on September 16: Sansera Engineering IPO, Hindustan Copper, SpiceJet, Lupin to Poonawalla Fincorp; here are the 5 Newsmakers of the Day