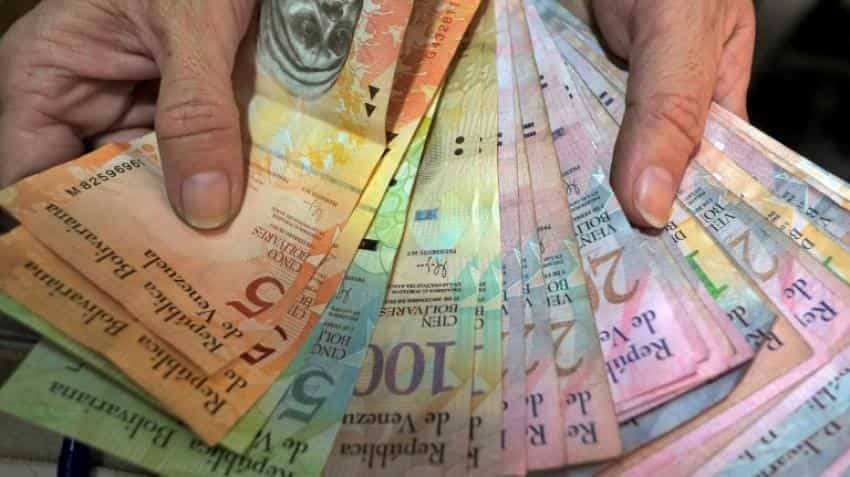 The 100 bolivar bill is worth fewer than three cents of a dollar at current market rates. One bill can barely cover the cost of a piece of candy, while a stack of 50 notes is needed to buy a hamburger. Image Source: AFP

Venezuelan President Nicolas Maduro on Sunday signed an emergency decree ordering the country`s largest banknote, the 100 bolivar bill, taken out of circulation to thwart "mafias" he accused of hoarding cash in Colombia.

The announcement came as the government of Venezuela -- a country in the midst of an economic crisis and crippled with the world`s highest inflation -- prepares to issue new banknotes and coins in values up to 200 times the highest denomination currently available.

The 100 bolivar bill is worth fewer than three cents of a dollar at current market rates. One bill can barely cover the cost of a piece of candy, while a stack of 50 notes is needed to buy a hamburger.

"In accordance with my constitutional powers and through this emergency economic decree, I have decided to take the 100 bolivar bill out of circulation in the next 72 hours," the president said Sunday on his TV show "Contact with Maduro."

Maduro said the move was necessary after a Venezuelan investigation found that billions of bolivars, in bills of 100, were stashed away by international mafias, mainly in Colombian cities but also in Brazil.

He said the national banks were "accomplices in this plot," seeking to "destabilize" the economy and led by an NGO "contracted by the US Department of Treasury." He did not elaborate.

Maduro ordered "all land, air and sea possibilities closed immediately so that they do not return those notes that were taken."

"You can stay outside with your scam," Maduro said, calling for the "maximum penalty" against the criminals.

Jose Guerra, a former director of Venezuela`s central bank and now an opposition lawmaker, said on Twitter that to switch out 100 bolivar notes in such a short amount of time, the central bank "must have an equivalent amount in notes of greater denominations," which he did not believe was possible.

Falling prices for Venezuela`s crucial oil exports have caused a shortage of dollars in the country, driving up prices of imports of food, medicine and other crucial goods.

The International Monetary Fund has forecast the inflation rate will hit 475 percent by the end of this year.

The center-right opposition blames Maduro`s management for the crisis. Maduro, meanwhile, says the crisis is a US-backed capitalist conspiracy.

US NSA tweets warning to India against buying Venezuelan oil