US visa:  Ninety-three  per cent  of granted applications for employment authorisation  were  issued to women; seven  per cent  to men, according to the report on H-4 visas by the independent Congressional Research Service of the US Congress, which prepares periodic reports on issues of interest to US lawmakers 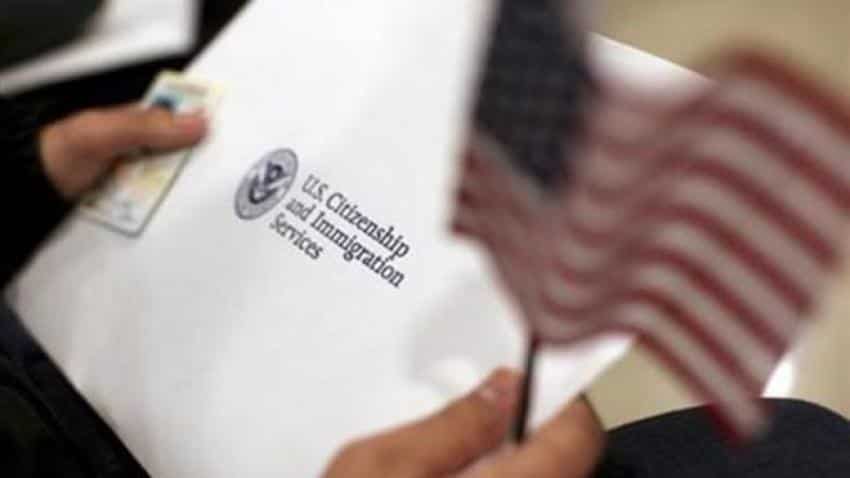 US visa: H-4 visa holders are not geographically constrained by law, and approvals for employment authorisation documents have been issued to H-4 non-immigrants living in all 50 states. Image source: Reuters
Written By: PTI
RELATED NEWS

A staggering 93 per cent of the total H-4 US visa holders in the US having work authorisation are from India, a latest Congressional report on the spouse visa has said. Over one-fifth of the H-4 visa holders with work authorisation live in California, it said. Ninety-three per cent of granted applications for employment authorisation were issued to women; seven per cent to men, according to the report on H-4 visas by the independent Congressional Research Service of the US Congress, which prepares periodic reports on issues of interest to US lawmakers.

This number includes 90,946 initial approvals, 35,219 renewals, and 688 replacements for lost cards. H-4 visa holders are not geographically constrained by law, and approvals for employment authorisation documents have been issued to H-4 non-immigrants living in all 50 states, the District of Columbia, and the US territories. California accounts for more than one-fifth (28,033), and Texas and New Jersey together account for another 20 per cent.

Before 2015, H-4 visa holders were not eligible for work authorisation. As the visa queue increased for individuals in particular those from India and China awaiting employment-based legal permanent resident (LPR) status, policymakers and others raised concerns about the lack of employment authorisation for spouses hindering the US' ability to attract and retain highly educated workers.

In 2015 Federal Register issued a notice establishing work authorisation for certain H-4 spouses referred to three anticipated benefits: reducing personal and financial burdens on H-1B and H-4 non-immigrants, reducing disruption to the US businesses and attracting and retaining highly-skilled workers. The previous Obama administration argued that allowing H-4 spouses to work would support the US economy because H-1B non-immigrants and their spouses have historically made significant contributions to entrepreneurship and research and development.

Finally, this rule may facilitate attracting and retaining highly skilled workers by bringing US immigration policies more in line with those of other countries that compete for similarly skilled workers, it said. Unlike work authorisation for H-1B visa holders, employment authorisation that is granted based on H-4 status is not restricted to a specific employer and does not require the employer to get approval from the Department of Labour.

H-4 work authorisation also does not prohibit self-employment, starting a business, or hiring employees. However, under its America First Policy, the Trump administration is proposing to remove from regulation H-4 spouses of H-1B non-immigrants as a class of foreign nationals eligible for employment authorisation. The result would be that H-4 visa holders would not have authorisation to work in the US.

The administration anticipates publishing the proposed rule in the Federal Register in June 2018, which would be followed by a public comment period before a final rule would be published, CRS said. While H-4 EADs have been issued to residents of almost 4,000 cities across the US, CRS said the cities with the highest numbers are around large "tech hubs" such as the Silicon Valley, northern New Jersey, Seattle, Dallas-Fort Worth, Houston, Austin, the Washington, DC, region and Atlanta.

CRS said Congress has considered several related pieces of legislation. The Immigration Innovation Act of 2018 (S.2344), as introduced in the 115th Congress, would codify the current regulation providing work authorisation to H-4 spouses of certain H-1B non-immigrants and would require the employer of the H-4 spouse to attest that they will pay her or him the greater of the prevailing wage for that occupation in the area of employment or the actual wage paid to other workers in the same job with similar qualifications (i.E., applying the same pay standard to the hiring of H-4 visa holders as is applied to their H-1B spouses).