In what would be the largest change to U.S. tax laws since the 1980s, Republicans want to add $1.4 trillion over 10 years to the $20 trillion national debt to finance changes that they say would further boost an already growing economy. 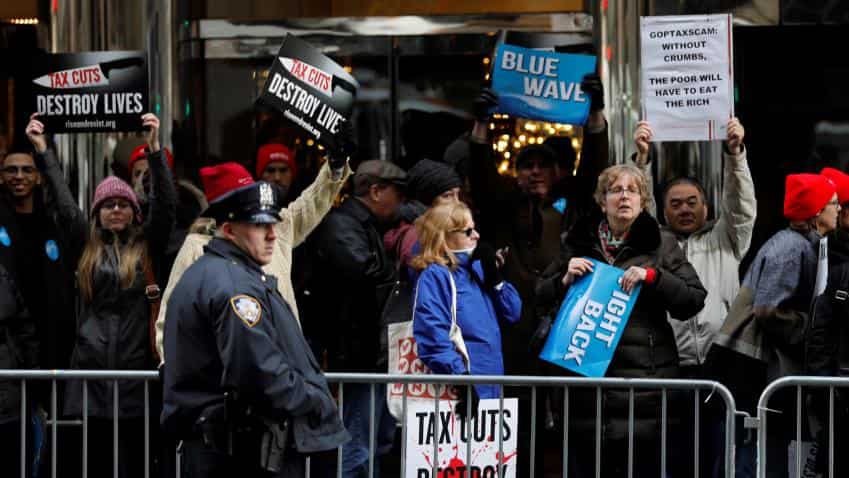 The U.S. Senate narrowly approved a tax overhaul on Saturday, moving Republicans and President Donald Trump a big step closer to their goal of slashing taxes for businesses and the rich while offering everyday Americans a mixed bag of changes.

In what would be the largest change to U.S. tax laws since the 1980s, Republicans want to add $1.4 trillion over 10 years to the $20 trillion national debt to finance changes that they say would further boost an already growing economy.

Trump, speaking to reporters as he left the White House for New York hours after the pre-dawn vote, praised the Senate for passing "tremendous tax reform" and said "people are going to be very, very happy".

Once the Senate and House of Representatives reconcile their respective versions of the legislation, he said, the resulting bill could cut the corporate tax rate from 35 percent "to 20 (percent). It could be 22 (percent) when it comes out. It could also be 20 (percent)."

U.S. stock markets have rallied for months on hopes that Washington would provide significant tax cuts for corporations.

"We have an opportunity now to make America more competitive, to keep jobs from being shipped offshore and to provide substantial relief to the middle class," said Mitch McConnell, the Republican leader in the Senate.

The Senate approved their bill in a 51-49 vote, with Democrats complaining that last-minute amendments to win over skeptical Republicans were poorly drafted and vulnerable to being gamed later.

"The Republicans have managed to take a bad bill and make it worse," said Senate Democratic leader Chuck Schumer. "Under the cover of darkness and with the aid of haste, a flurry of last-minute changes will stuff even more money into the pockets of the wealthy and the biggest corporations."

No Democrats voted for the bill, but they were unable to block it because Republicans hold a 52-48 Senate majority.

Talks will begin, likely next week, between the Senate and the House, which already has approved its own version of the legislation, to reconcile their respective bills.

Trump, who predicted that the negotiations would produce "something beautiful," wants that to happen before the end of the year. This would allow him and his Republicans to score their first major legislative achievement of 2017 after having controlled the White House, the Senate and the House since he took office in January.

Republicans failed in their efforts to repeal the Obamacare healthcare law over the summer and Trump`s presidency has been hit by White House in-fighting and a federal investigation into possible collusion last year between his election campaign team and Russian officials.

The tax overhaul is seen by Trump and Republicans as crucial to their prospects at mid-term elections in November 2018, when they will have to defend their majorities in Congress.

In a legislative battle that moved so fast a final draft of the bill was unavailable to the public until just hours before the vote, Democrats slammed the proposed tax cuts as a give-away to businesses and the rich financed with billions of dollars in taxpayer debt.

The framework for both the Senate and House bills was developed in secret over a few months by a half-dozen Republican congressional leaders and Trump advisers, with little input from the party`s rank-and-file and none from Democrats.

Six Republican senators, who wanted and got last-minute amendments and whose votes had been in doubt, said on Friday they would back the bill and did so.

Senator Bob Corker, one of few remaining Republican fiscal hawks who pledged early on to oppose any bill that expanded the federal deficit, was the lone Republican dissenter.

"I am not able to cast aside my fiscal concerns and vote for legislation that ... could deepen the debt burden on future generations," said Corker, who is not running for re-election.

Numerous last-minute changes were made to the bill on Friday and in the early morning hours of Saturday.

"The tax reform measure that passed the Senate is negative overall for state and local government finances. Lower federal tax rates for businesses and individuals could result in a modest boost to hiring and consumption, positively affecting state and local revenues," Nick Samuels, Vice President at Moody’s Investors Service, said in a statement.

"However, the change to the state and local tax (SALT) deduction would reduce disposable income for many taxpayers, likely outweighing the positive effect of lower federal rates on consumption in many communities and states."

In another change, the alternative minimum tax (AMT), both for individuals and corporations, would not be repealed in full. Instead, the individual AMT would be adjusted and the corporate AMT would be maintained as is, lobbyists said.

Another change would put a five-year limit on letting businesses immediately write off the full value of new capital investments. That would phase out over four years starting in year six, rather than be permanent as initially proposed.

Under the bill, the corporate tax rate would be permanently slashed to 20 percent from 35 percent, while future foreign profits of U.S.-based firms would be largely exempt, both changes pursued by corporate lobbyists for years.

On the individual side, the top tax rate paid by the highest-income earners would be cut slightly.

The Tax Policy Center, a nonpartisan think tank, analyzed an earlier but broadly similar version of the bill passed by the Senate tax committee on Nov. 16 and found it would reduce taxes for all income groups in 2019 and 2025, with the largest average tax cuts going to the highest-income Americans.

Two Republican senators announced their support for the bill on Friday after winning more tax relief for non-corporate pass-through businesses. These include partnerships and other companies not organized as public corporations, ranging from mom-and-pop concerns to large financial and real estate groups.

The bill now features a 23 percent tax deduction for such business owners, up from the original 17.4 percent.

The Senate bill would gut a section of Obamacare by repealing a fee paid by some Americans who do not buy health insurance, a step critics said would undermine the Obamacare system and raise insurance premiums for the sick and the old.

Senator Susan Collins, a moderate Republican, said she obtained commitments from Republican leaders that steps would be taken later in separate legislation to minimize the impact of the repeal of the "individual mandate" fee.