India's software industry body Nasscom has suggested US president Donald Trump to calibrate the conditions keeping in mind the skill shortage in the US. 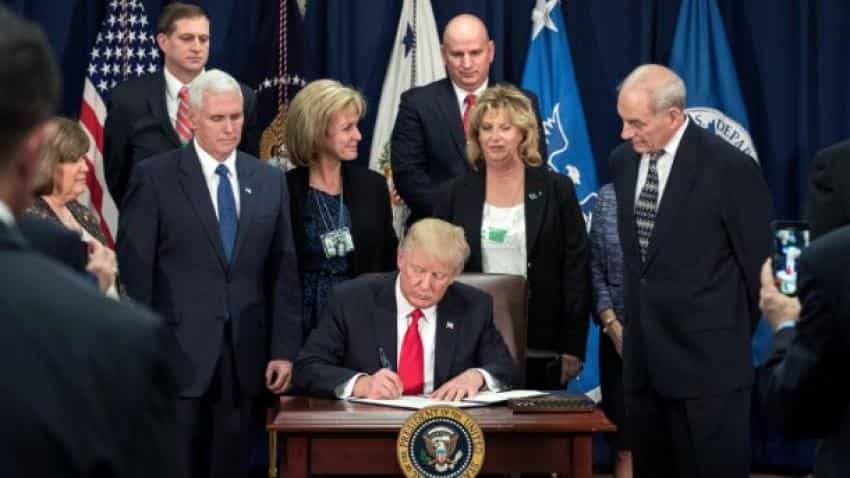 The H1-B and L1 visas are used by Indian Information Technology (IT) professionals to work in the US. Image Source: Donald Trump/Twitter

As the US president Donald Trump is expected to sign a new executive order aimed at killing work-visa programmes including the H1-B and L1 visas as part of a larger immigration reform, Indian software industry body Nasscom has suggested president to carefully analyse the conditions on the skill shortage in the United States (US) before it signs bill to save jobs for Americans .

“Since the rationale for the Administration and the Legislative wing is to protect job opportunities for Americans, our strong suggestion is that they should carefully calibrate the conditions keeping in mind the skill shortage in the US. Once that is done, they should not leave any loopholes in the rules being framed that leave some channels open for circumventing the limits," Nasscom president R Chandrashekhar, said in a press release on Tuesday.

The H1-B visa is a non-immigrant visa that allows US companies to employ foreign workers in speciality occupations that require theoretical or technical expertise in specialised fields. The technology companies depend on it to hire tens of thousands of employees each year, according to PTI report.

Nasscom further said that the Lofgren Bill has just been introduced and will need to go through several legislative discussions at the US Congress and Senate before this can become a law.

"...it will continue to engage with the US administration and legislators both directly and through Government of India," it added.

India's External Affairs Ministry on Tuesday said that the country's interests and concerns have been conveyed to the US administration and US Congress at senior levels.

"India's interests and concerns have been conveyed both to the US administration and the US Congress at senior levels," PTI reported quoting External Affairs Ministry Spokesperson Vikas Swarup,as saying on Tuesday.

However, Swarup didn't elaborate whether the issue was raised after the recent reports that an executive order has been drafted by the Trump Administration and will severely impact Indian companies, specifically IT organisations.

The executive order drafted by the Trump Administration not only strangulates H1-B and L1 visas, but also increases inspector raj and ends employment authorisation cards to spouses on such work visas, which was recently introduced by the previous Obama Administration, cited the news report.

The draft of the order was leaked and published by some news websites on Monday.

"I think with respect to H1-Bs and other visa is part of a larger immigration reform effort that the President will continue to talk about through executive order and through working with Congress," the PTI news report said quoting White House Press Secretary Sean Spicer as saying to reporters at his daily news conference.