The Trump administration launched a $50 billion economic formula for Israeli-Palestinian peace on Tuesday, saying an investment-driven pathway forward for the Palestinians was a necessary precondition for ending the decades-old conflict. 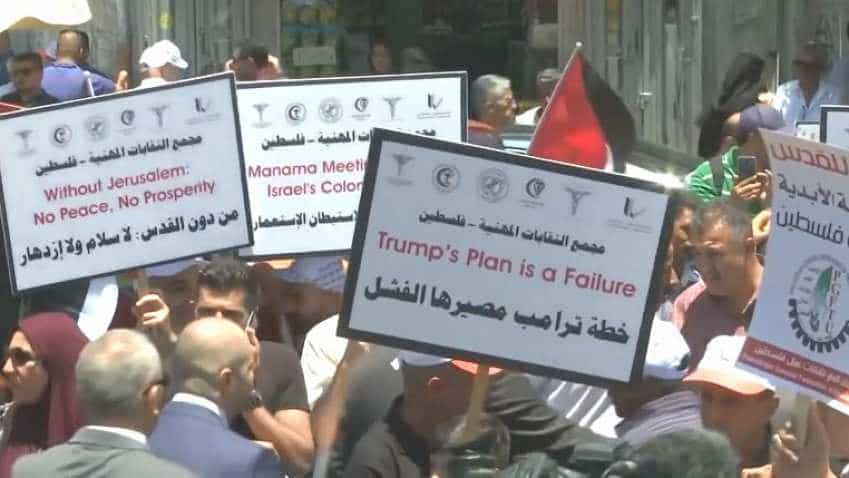 The Trump administration launched a $50 billion economic formula for Israeli-Palestinian peace on Tuesday, saying an investment-driven pathway forward for the Palestinians was a necessary precondition for ending the decades-old conflict. Opening a two-day international meeting in the Gulf kingdom of Bahrain, U.S. President Donald Trump`s son-in-law and senior advisor Jared Kushner said prosperity for Palestinians was not possible without a fair political solution to the conflict. But he added that by working to develop the Palestinian economy, the result could be "a real peace that leads to prosperity".

"We see tremendous potential," he said. "What we have developed, is the most comprehensive economic plan ever created specifically for the Palestinians, and the broader Middle East. "We can turn this region from a victim of past conflicts, into a model for commerce and advancement throughout the world." The Palestinian leadership has previously reiterated its disdain for the plan, which has been almost two years in the making. Saudi Arabia, envisaged as one of its main bank-rollers, has also indicated some reservations.

The meeting has been billed as the first part of Washington`s broader political blueprint to resolve the Israeli-Palestinian conflict. But the project`s political details remain a secret. Neither the Israeli nor Palestinian governments are attending the curtain-raising event in Manama, which Lebanon and Iraq are staying away from. Palestinian President Mahmoud Abbas, whose Palestinian Authority exercises limited self-rule in the Israeli-occupied West Bank, was scathing about its prospects of success.
"Money is important. The economy is important. But politics are more important. The political solution is more important." Kushner appeared to acknowledge such views, suggesting the politics of the conflict needed more time to address.

He said: "To be clear, economic growth and prosperity for the Palestinian people are not possible without an enduring and fair political solution to the conflict . . . one that guarantees Israel’s security, and respects the dignity of the Palestinian people. "However, today is not about the political issues. We will get to those at the right time."

Washington will be hoping that attendees in Manama such as wealthy Gulf states will show a concrete interest in the plan, which expects donor nations and investors to contribute $50 billion to Palestinian territories, Jordan, Egypt and Lebanon. Saudi Arabia - a close U.S. ally which shares a common foe with Israel in Iran - voiced support on Tuesday for "international efforts aimed at improving prosperity, investment and economic growth in the region". But Riyadh reiterated that any peace deal should be based on the Saudi-led Arab peace initiative that has been the Arab consensus on the necessary elements for a deal since 2002.

That plan calls for a Palestinian state drawn along borders which predate Israel`s capture of territory in the 1967 Middle East war, as well as a capital in East Jerusalem and refugees` right of return - points rejected by Israel. Chief Palestinian negotiator Saeb Erekat said Kushner is "committed to the initiatives of Israel`s colonial settlement councils." Israeli Prime Minister Benjamin Netanyahu, a close Trump ally, said Israel was open to the plan. "We`ll hear the American proposition, hear it fairly and with openness," he said on Sunday.

"If there is a one percent chance we do something good here, we should get together and try," billionaire Mohamed Alabbar, one of Dubai`s most prominent businessmen, said after arriving at the venue in Manama and embracing two American rabbis. Expectations for success are low. Jordan and Egypt, the only Arab states to have reached peace with Israel, have sent deputy finance ministers. Kushner`s plan - billed "Peace to Prosperity" - has hit a political nerve in Jordan, home to millions of citizens of Palestinian refugee origin.

It is not clear whether the Trump team plans to abandon the "two-state solution," which involves creation of an independent Palestinian state living side by side with Israel. The United Nations and most nations back the two-state solution and it has underpinned every peace plan for decades. But Trump`s team has consistently refused to commit to it, keeping the political stage of the plan a secret. U.N. Secretary-General Antonio Guterres called for "peace efforts to realize the vision of two States, Israel and Palestine, living side by side in peace and security".

Any such solution would have to settle long-standing issues such as the status of Jerusalem, mutually agreed borders, satisfying Israel`s security concerns and Palestinian demands for statehood, and the fate of Israel`s settlements and military presence in territory in Palestinians want to build that state. In Gaza, businesses closed doors in a general strike called by the ruling Islamist Hamas group and other factions.

In the West Bank on the outskirts of Ramallah, where a small crowd of protesters was dispersed by Israeli troops firing tear gas, Palestinian lawmaker Mustafa Barghouti said: "There can be no economic solution as a substitute for our freedom." Palestinian leaders have boycotted the conference, and are refusing to engage with the White House - accusing it of pro-Israel bias. Breaking with international convention, Trump in 2017 recognised disputed Jerusalem as Israel`s capital - a move that infuriated the Palestinians and other Arabs.