The US job growth has rebounded sharply in April and the unemployment rate dropped to 4.4%, near a 10-year low, pointing to a tightening labour market that likely seals the case for an interest rate increase next month. 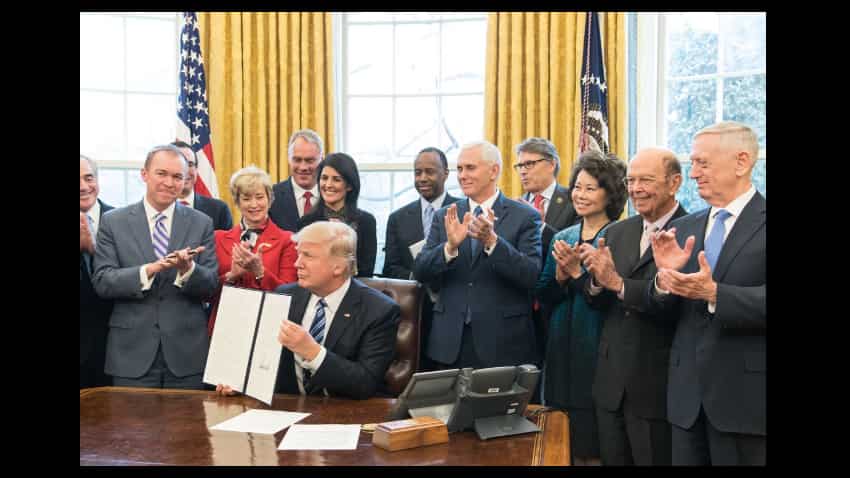 US president Donald Trump later hailed the numbers in a tweet: "Great jobs report today - It is all beginning to work!" Image Source: Donald Trump/Twitter
Written By: Reuters
RELATED NEWS

US job growth rebounded sharply in April and the unemployment rate dropped to 4.4%, near a 10-year low, pointing to a tightening labour market that likely seals the case for an interest rate increase next month despite moderate wage growth.

Non-farm payrolls surged by 211,000 jobs last month after a paltry gain of 79,000 in March, the Labour Department said on Friday. April`s job growth, which was broad-based, surpassed this year`s monthly average of 185,000.

There were hefty increases in leisure and hospitality, healthcare and social assistance as well as business and professional services payrolls.

The drop of one-tenth of a percentage point in the jobless rate took it to its lowest level since May 2007 and well below the most recent Federal Reserve median forecast for full employment.

"These developments should keep the Fed firmly on track to hike rates again in June and should motivate a hawkish shift in the interest rate forecasts they will release at that meeting," said Michael Feroli, an economist at JPMorgan in New York.

The hiring rebound supports the US central bank`s contention that the pedestrian 0.7% annualised economic growth pace in the first quarter was likely "transitory," and its optimism that economic activity would expand at a "moderate" pace.

The Fed on Wednesday kept its benchmark overnight interest rate unchanged and said it expected labour market conditions would "strengthen somewhat further." It raised rates by a quarter of a percentaage point in March and has forecast two more increases this year.

Financial markets are pricing in a roughly 83% probability of a 25-basis-point rate increase at the Fed`s June 13-14 policy meeting, according to CME Group`s FedWatch program.

Prices of benchmark US Treasuries rose modestly on Friday, while US stocks closed higher, with the S&P 500 <.SPX> ending at a record high close. The dollar <.DXY> fell marginally against a basket of currencies as investors turned their attention to the second round of France`s presidential election on Sunday.

The US economy needs to create 75,000 to 100,000 jobs per month to keep up with growth in the working-age population.

Republican President Donald Trump, who inherited a strong job market from the Obama administration, has vowed to sharply boost economic growth and further strengthen the labour market by slashing taxes and cutting regulation.

Trump later hailed the numbers in a tweet: "Great jobs report today - It is all beginning to work!"

Great jobs report today - It is all beginning to work!

In April, average hourly earnings rose 7 cents, or 0.3%. However, downward revisions to previous months lowered the year-on-year increase to 2.5%, the smallest gain since August 2016, from 2.6% in March.

But there are signs wage growth is accelerating as labour market slack diminishes. A government report last week showed private-sector wages recorded their biggest gain in 10 years in the first quarter.

With the labour market expected to hit a level consistent with full employment this year, payroll gains could slow amid growing anecdotal evidence that firms are struggling to find qualified workers. That could also boost wages.

"While there is still some labour market slack, it is diminishing rapidly. This is likely to put upward pressure on wages," said David Berson, chief economist at Nationwide Insurance in Columbus, Ohio.

A broad measure of unemployment, which includes people who want to work but have given up searching and those working part-time because they cannot find full-time employment, dropped three-tenths of a percentaage point to 8.6%, the lowest level since November 2007.

The employment-to-population ratio rose one-tenth of percentage point to an eight-year high of 60.2%. This measure has risen for four straight months.

The labour force participation rate, or the share of working-age Americans who are employed or at least looking for a job, fell to 62.9% from an 11-month high of 63% in March. It has rebounded from a multi-decade low of 62.4% in September 2015, and economists see limited room for further improvement as the pool of discouraged workers shrinks.

Retail payrolls gained 6,300 after two straight months of declines. Retailers including J C Penney Co Inc , Macy`s Inc and Abercrombie & Fitch have announced thousands of layoffs as they shift toward online sales and scale back on brick-and-mortar operations.

Government payrolls jumped by 17,000 last month as an increase in hiring by local governments offset a decline in federal government employment.