The policy-setting Federal Open Market Committee voted unanimously to increase the key federal funds rate to a range of 0.5 to 0.75 percent, but repeated that the world`s biggest economy likely will require only "gradual" rate increases going forward. 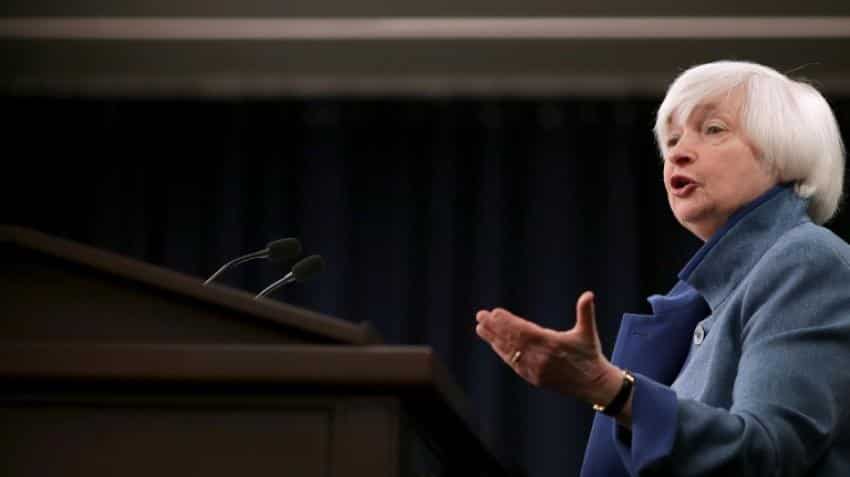 The US Federal Reserve on Wednesday raised the benchmark interest rate by a quarter percentage point as expected, citing an improving economy with one month to go before President-elect Donald Trump takes office.

The policy-setting Federal Open Market Committee voted unanimously to increase the key federal funds rate to a range of 0.5 to 0.75 percent, but repeated that the world`s biggest economy likely will require only "gradual" rate increases going forward.

Fed chair Janet Yellen said the rate hike can be seen as a "vote of confidence" in the economy.

The rate increase from the previous range of 0.25 to 0.5 percent is the first hike since December 2015 and only the second in a decade.

The move "should certainly be understood as a reflection of the confidence we have in the progress that the economy has made and our judgment that that progress will continue," Yellen told a press conference following the meeting.

"And the economy has proven to be remarkably resilient, so it is a vote of confidence in the economy."

After rallying consistently and hitting multiple new records since Trump`s election on November 8, putting the Dow within striking distance of the 20,000-point mark, US stocks fell in the wake of the Fed announcement.

Yellen declined to comment on the market reaction other than to say that it could be due to expected tax cuts under a Trump administration.

Yellen agreed such policies can change decisions by central bankers, but cautioned against any premature guessing games.

"I really can`t tell you what the Fed`s response would be to any policy changes that are put into effect," she said.

"I wouldn`t want to speculate until I were more certain of the details and how they would affect the likely course of the economy."

However, she said some Fed officials did include expectations for increased government spending in their forecasts.

In their quarterly economic projections, Fed officials anticipate three increases in 2017, putting the rate at 1.4 percent at the end of the year. It would then rise at the close of 2018 to 2.1 percent.

Of the 17 officials making predictions, 11 see rates of 1.375 percent or higher next year.

Yellen repeated her recent statement that government spending on programs that increase the economy`s productive capacity would be useful, such as enhanced education, training and workforce development.

The central bankers project inflation will not hit the 2.0 percent target until 2018, falling just shy of the mark next year.

The FOMC statement noted that inflation indicators "still are low" relative to the target.

"In light of the current shortfall of inflation from two percent, the Committee will carefully monitor actual and expected progress toward its inflation goal," it said.

The other key data focus for Fed policy, unemployment, is forecast to remain steady at around 4.5 percent through 2019, from 4.6 percent currently.

The committee has been divided this year about the timing of this rate increase, with some worried about the potential threat of inflation if the Fed failed to act.

But the majority view had been that there was a greater risk of jeopardizing the fragile US recovery by moving too soon, especially amid global uncertainties including the slowing of China`s economy and Britain`s vote to leave the European Union.

In addition, signs of inflation or wage pressures were absent from the economic data. But the FOMC notes that inflation has been kept low in part due to the decline in energy prices, which could prove to be temporary.

Yellen denied that she favors "running the economy hot" -- keeping rates low for an extended period to boost inflation to the Fed`s target.

On the broader economy, the committee said growth has continued at a "moderate pace" since mid-year, accompanied by moderate increases in household spending, while the labor market "has continued to strengthen."

However, business investment in new plants has been soft.