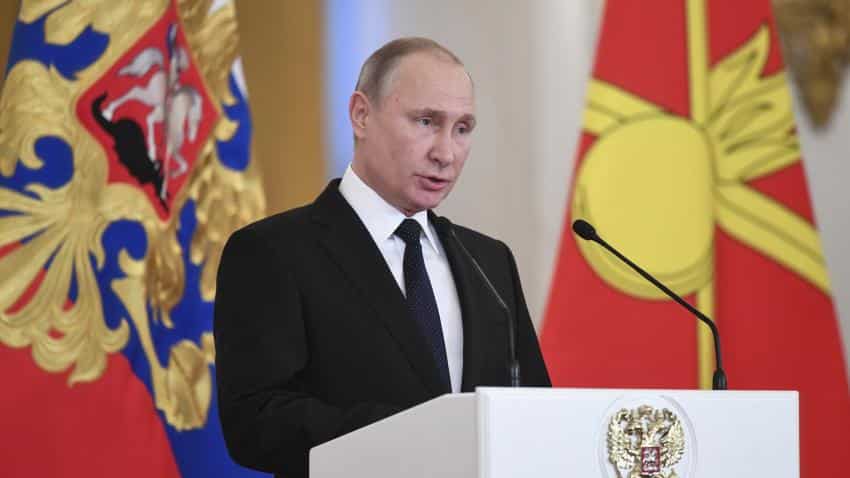 Russian President Vladimir Putin hosts German Chancellor Angela Merkel on Friday to discuss the explosive global issues of Iran, Syria and Ukraine amid a deepening US-European crisis of confidence. This year's first face-to-face talks between the veteran leaders, who speak each others' languages, comes as European powers are scrambling to preserve the Iran deal which US President Donald Trump abandoned last week. For Merkel, the main objective in the Russian Black Sea resort of Sochi will be to seek pragmatic dialogue with Putin, despite their yawning political differences, in the quest to preserve the landmark 2015 agreement.

Time is running out to save the accord under which Iran pledged not to build a nuclear bomb in return for relief from punishing sanctions. While Trump has threatened to punish allies which continue to do business with the Islamic republic, Iran has demanded European guarantees to respect the pact and warned it could revive its atomic programme, sparking fears of more turmoil in the conflict-torn region.
Iranian Foreign Minister Mohammad Javad Zarif, on a whirlwind global diplomatic tour, Tuesday welcomed as "a good start" talks with his French, British and German counterparts in Brussels but insisted on continued economic benefits for Iran.

Putin -- a key player as an ally of Iran, with which it militarily backs President Bashar al-Assad in Syria's bloody conflict -- is also due to meet French President Emmanuel Macron in late May. After years of a deepening East-West rift sometimes labelled a new Cold War, Merkel recently repeated her warning that Europe can no longer rely on its traditional bedrock NATO ally the United States to "protect" it.

German public broadcaster Deutsche Welle commented that "a rapprochement between Germany and Russia could be an unexpected consequence of Trump's decision to abandon the nuclear deal with Iran".
Merkel's challenge will be how to move forward without yielding to Moscow on a range of divisive issues -- from Russia's role in Syria to Iran's ballistic missile programme to sanctions imposed against Russia over the Ukraine conflict.

Western powers have also accused Moscow of a poison attack on Russian double agent Sergei Skripal in Britain and of destabilising cyber attacks and disinformation campaigns, claims which Russia denies.
Also looming over the talks is the festering conflict between Ukraine's government and pro-Russian rebels which has seen barely a day without armed clashes since the 2015 Minsk peace accords brokered by Berlin and Paris.

This week starkly recalled Russia's 2014 annexation of the Crimea when Putin, who was re-elected for a fourth Kremlin term in March, personally drove a truck over a new 19 kilometre bridge linking the peninsula with the Russian mainland.

Despite all the problems, Germany and Russia see eye to eye on one issue that troubles other EU nations and has sparked angry protests from Trump -- the construction of a new Baltic Sea pipeline to export Russian gas to the biggest EU economy.

Russian Foreign Minister Sergei Lavrov has welcomed the "continued support of Germany for the construction of Nord Stream 2", which is due to come into service in 2019. Several EU countries, most vocally Poland, have protested the project for aiding a big neighbour they see as a strategic threat.

Berlin has urged Moscow to give assurances that it will preserve Ukrainian interests and not deprive it of lucrative gas transit fees. A final irritant has emerged as Russia readies to host the World Cup, where the German national side will seek to defend their world title.

Berlin this week protested Moscow's denial of a visa to a German journalist who was a driving force in uncovering the Russian state-sponsored doping scandal. Moscow relented, but also warned that its prosecutors would seek the reporter for questioning if he enters Russian soil.

Germany has so far not confirmed whether it will send government representatives to the international football tournament.

Indian bowlers not good as Wagner is with short balls, indicates Smith