US digital lobby comprising Facebook, Google, Amazon says India has too many barriers for trade

IA's complaint is that many policies create market access barriers for doing business in India.This comes just a day after India's ranking jumped up 23 places in the World Bank list to take up the 77th spot in global Ease of Doing Business rankings. 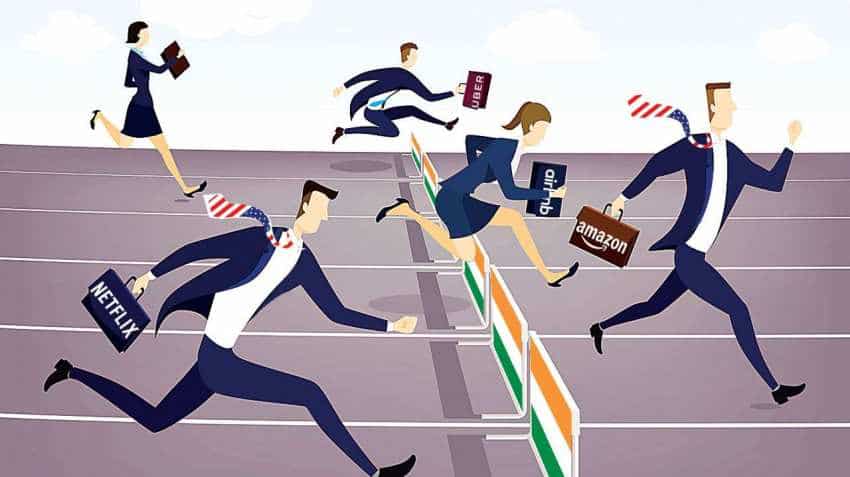 Digital trade accounts for more than 50% of all US services exports — it exports $86.5 billion of products and services through digital trade every year. Image source: DNA

The ability of US businesses to reach 95 per cent of the world's customers through US Internet services hangs in a balance. The Internet Association (IA) has red-flagged trade restrictions in India to the Office of the United States Trade Representative (USTR), the government agency responsible for developing and recommending trade policy to the president of the United States.

Digital trade accounts for more than 50% of all US services exports — it exports $86.5 billion of products and services through digital trade every year.

IA's complaint is that many policies create market access barriers for doing business in India.This comes just a day after India's ranking jumped up 23 places in the World Bank list to take up the 77th spot in global Ease of Doing Business rankings.

The recent push by some countries, notably India, Indonesia, and South Africa, to end the World Trade Organization's moratorium on duties on electronic transmission would have a detrimental impact on how the Internet connects and adds value to the world and expand the Internet's role as a key driver of US exports, job creation, and economic development by making digital trade a top priority in the 2019 NTE Report and its trade agenda.

The submission, part of a 64-page report, has gone to the Trade Policy Staff Committee for consideration as the Office of the USTR prepares the 2019 National Trade Estimate Report (NTE).

"The Ministry of Commerce formed a think tank (or committee) to frame the E-Commerce Policy for India, a draft of which was released in July 2018," the US lobby said. "The think tank did not have any representation of foreign companies. India-promoted companies such as Snapdeal, Paytm and Ola Cabs were represented and aim(ed) to make the policy favourable to Indian companies to protect their interests."

Some of the proposed clauses included provisions to enable founders to retain control of companies they have minority stakes in, mandatory disclosure of source codes to the government under domestic law, discouraging FDI in the sector through over-regulation. There's a global race to set rules for the digital economy.

Flaying the draft Data Protection bill that seeks to define principles and parameters for the Indian data economy, the American Internet firms' lobby said: "...in a number of respects, the Bill is far more restrictive than the EU's recently enacted GDPR, which is widely considered to be the most comprehensive regulation in the data protection sphere."

IA has problems with the way the Bill defined 'sensitive personal data' to include financial data and passwords (in conflict with global best practices on privacy), and definition of a 'child' to include anyone under 18 years old. "IA strongly encourages US agencies to engage with their Indian counterparts to address these concerns and develop a privacy framework that is more consistent with global norms," the submission said, a copy of which has been accessed by DNA Money.

The association also claims that several steps are in deep conflict with global best practices on data governance and data localization, and which present severe market access barriers to US firms."IA is deeply concerned with the Reserve Bank of India's directive requiring data related to payment transactions be stored only in India," it said. "The directive does not clarify whether the data can be accessed from or transferred outside the country, even if a copy is kept in India."

Other proposed prescriptive requirements on data localization include a draft cloud computing policy requiring local storage of data, draft national e-commerce policy framework and draft Data Protection Bill. "These would harm a wide range of US exporters and damage India's domestic digital economy," says AI, "For example, the Data Protection Bill would require companies to store a copy of all "personal data" in India, while subjecting "sensitive" personal data to even stricter requirements and mandating that "critical" personal data can only be processed within India. These definitions of personal data all remain very unclear."

IA has even claimed that mandating local storage of data "will not facilitate access" to it by law enforcement. It suggested that both nations engage bilateral and multilateral instruments to make data-sharing work in the cloud era without resorting to localization measures. "IA strongly urges inclusion of removal of data localization requirements in the RBI directive, the data protection bill, the e-commerce policy, the cloud computing policy," the lobby said.

IA also criticized competition norms. "...there may be more that the CCI can do to protect the confidential information of investigated parties and third parties. Improper disclosure of information and information leaks can have a detrimental impact on the investigatory process and the standing of the agency," it noted.

What is Internet Association?
A US industry trade group founded by companies including Google, Amazon, eBay and Facebook.

Why is it important?
IA represents the interests of the unified voice of the Internet economy. Its members are the drivers of America’s digital trade surplus of $196 billion.

Why attack India?
IA has red-flagged barriers firms face in doing business or competing on an even playing field in India such as the data protection regime, data flow restrictions, competition regulations, mobile payment barriers, etc.

Others on the radar
Nations creating the most barriers for IA include the EU, Indonesia, China, and Vietnam.

How does IA control the digital world?
The Silicon Valley either houses or has strong links to more than 50% of the top digital companies by market capitalization. They control what we see, read, view and discuss on the digital world. Beyond direct lobbying spending, it exerts influence on policymakers and citizens through soft power techniques such funding think tanks, research bodies and trade associations who influence the government or civil society.