The issue of the final signing of the memorandum of understanding on illegal immigrants was raised by UK Minister of State for Countering Extremism Baroness Williams during her talks with Union Minister of State for Home Kiren Rijiju here yesterday. During the hour-long talks, Williams stressed the need for the formal signing of the MoU to enable the return of illegal Indian migrants within a month of their detection by the British authorities, an official privy to the development said. 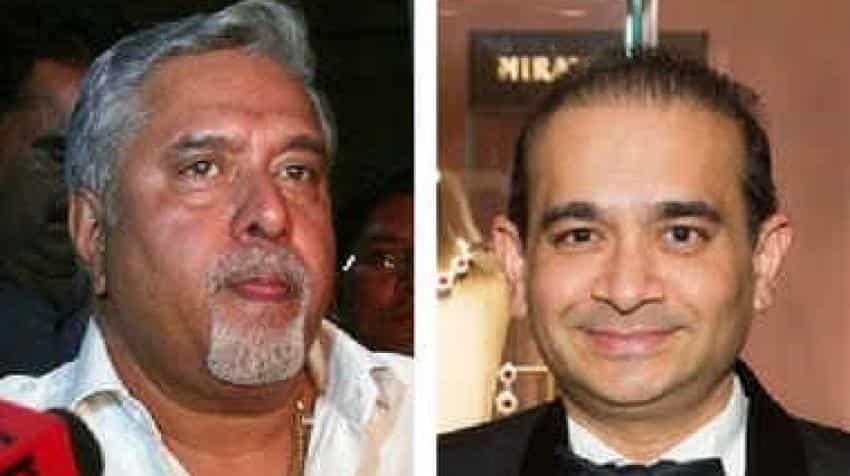 In the meeting between Rijiju and Williams, the UK side confirmed the presence of Nirav Modi in Britain. Image source: Reuters
Written By: PTI
RELATED NEWS

The UK may link the extradition process of fugitive diamantaire Nirav Modi and liquor baron Vijay Mallya with the signing of a much-delayed agreement that will facilitate deportation of over 75,000 Indians who are allegedly illegally staying there, officials said today.

During the hour-long talks, Williams stressed the need for formal signing of the MoU to enable the return of illegal Indian migrants within a month of their detection by the British authorities, an official privy to the development said.

The Indian side raised the issue of extradition of Nirav Modi, Mallya and others to face law here.

"We afraid they may link the process of extradition of Nirav Modi, Vijay Mallya and others with the signing of the MoU," the official said.

In the meeting between Rijiju and Williams, the UK side confirmed the presence of Nirav Modi in Britain.

Rijiju had signed a draft agreement on the issue of illegal immigrants in London on January 10 while the formal MoU was supposed to be inked during Prime Minister Narendra Modi's visit to the UK in April.

However, New Delhi has delayed the signing of the final agreement, apparently due to the concerns raised by certain quarters in the government, another official said.
Rijiju signed the draft agreement following the approval of the Union Cabinet, chaired by Prime Minister Modi late last year.

Another official said this was perhaps one of the few instances when India delayed formalising a bilateral agreement despite signing the draft deal.

The range of concerns include fear of mass deportation, a consent clause and possible security breaches.

According to British authorities, who have been pressing consistently on returning illegal immigrants, the largest group of such people in the UK is from India.
Around 5,000 Indians voluntarily returned to India in 2017 and around 700 were deported.

The consent clause is whether a person's approval is sought before the process to ascertain his or her nationality is started.

India wants this clause, which will give relief in certain cases, but the UK is apparently not keen as this would effectively be making an exemption for a person staying illegally in Britain.

New Delhi is concerned that a large number of Indians can be sent back without any humanitarian considerations.

Besides, India has also made it clear that it will accept those Indians whose Indian nationality is established after verification within a fortnight.

India will not accept those whose nationality could not be verified as physical features of the citizens of Pakistan, Bangladesh, Sri Lanka and Nepal are similar to Indians, the official said.

The UK has assured India that the agreement is merely codifying the existing immigration rules and it has similar deals with Nigeria, China, Pakistan and Ghana - countries with a large number of citizens living illegally in Britain.

According to the initial agreement, the British authorities will first identify the illegal migrant, the Indian authorities will be informed and then the verification will be done by police agencies back home.

If the claims of the British authorities are found to be correct, then travel documents will be readied and the person deported by the UK authorities. This process will have a timeline of one month, the official said.

While the UK claims that number of illegal migrants is between 75,000 and 100,000, Indian agencies believe only 2,000 Indians are overstaying there.

Nirav Modi is at the centre of a money laundering case linked to the over Rs 13,000 crore Punjab National Bank (PNB) fraud.

India is also pushing for the extradition of liquor tycoon Mallya, who is on trial for the UK court to rule if he can be extradited to India to face charges of fraud and money laundering amounting to around Rs 9,000 crore.