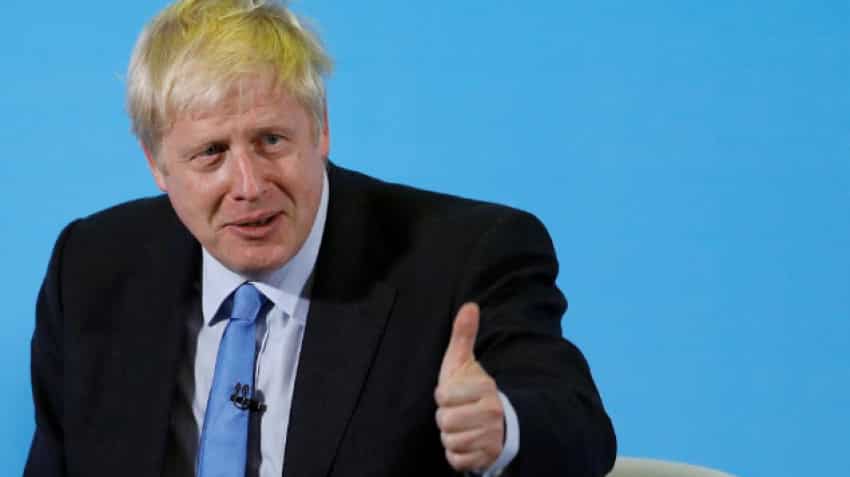 Prime Minister Boris Johnson`s Conservative Party was on course for a resounding victory in Britain`s election after voters backed his bid to deliver Brexit on Jan. 31, Photo: Reuters
Written By: Reuters
RELATED NEWS

UK elections 2019: Prime Minister Boris Johnson`s Conservative Party was on course for a resounding victory in Britain`s election after voters backed his bid to deliver Brexit on Jan. 31, the country`s most significant geopolitical move in 70 years.

For Johnson, whose 20-week tenure in power has been marked by chaotic scenes in parliament and stark division on the streets over Britain`s tortuous departure from the European Union, the victory in Thursday`s contest is vindication.

Educated at the country`s most elite school and recognisable by his bombastic style, the 55-year-old must not only deliver Brexit but also convince Britons that the contentious divorce, which would lead to lengthy trade talks, is worth it.

A landslide Conservative win would mark the ultimate failure of opponents of Brexit who plotted to thwart a 2016 referendum vote through legislative combat in parliament and prompted some of the biggest protests in recent British history.

An exit poll showed the Conservatives winning a landslide 368 seats, more than enough for a comfortable majority in the 650-seat parliament and the biggest Conservative national election win since Margaret Thatcher`s 1987 triumph.

"I hope you enjoy a celebration tonight," Johnson, the New-York born former mayor of London, told supporters in an email. "With any luck, tomorrow we’ll be getting to work."

With results from across Britain indicating the exit poll was accurate, Johnson`s bet on a snap election has paid off, meaning he will swiftly ratify the Brexit deal he struck with the EU so that the United Kingdom can leave on Jan. 31 - 10 months later than initially planned.

But nearly half a century after joining what has become the world`s largest trading bloc, Johnson faces the daunting challenge of striking new international trade deals, preserving London`s position as a top global financial capital and keeping the United Kingdom together.

Sterling soared, reaching a 19-month high versus the dollar of as much as $1.3516

British PM Johnson: We have a powerful mandate for Brexit

British Prime Minister Boris Johnson said on Friday that his government has won a powerful new mandate to get Brexit done.

"I think this will turn out to be a historic election that gives us now, in this new government, the chance to respect the democratic will of the British people, to change this country for the better and to unleash the potential of the entire people of this country."

"That is what we will now do, and if we are lucky enough to be returned as the exit poll seems to suggest then that work will begin ... today."

Johnson increased his share of the ballot in his West London seat by 1.8 percentage points, winning 25,351 votes to give him an increased majority of 7,210.

His Conservative Party made gains in the Midlands and North of England that had been Labour strongholds for generations, putting it on course for its best result since 1987.

Here is a list of the Conservative party's gains and losses.
CONSERVATIVE GAINS: 49