Bank of England Governor Mark Carney said a global trade war and a no-deal Brexit were growing risks to Britain`s economy which might need more help to cope with a downturn, prompting investors to increase their bets on a BoE interest rate cut. 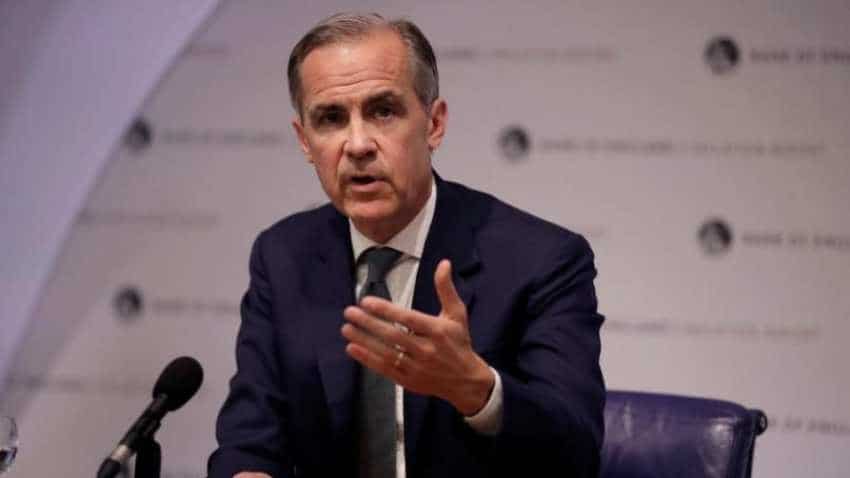 Bank of England Governor Mark Carney said a global trade war and a no-deal Brexit were growing risks to Britain`s economy which might need more help to cope with a downturn, prompting investors to increase their bets on a BoE interest rate cut. Carney highlighted a "sea change" in concern among investors about the world economy, caused in large part by the trade policies of U.S. President Donald Trump. "The latest actions raise the possibility that trade tensions could be far more pervasive, persistent and damaging than previously expected. The rationales for action are broadening," he said in a speech.

Carney said low inflation in many advanced economies might mean the so-called equilibrium interest rate - which keeps inflation on target and the economy operating at full capacity - is lower than central banks believe. But he also suggested that government spending increases or tax cuts would be needed to offset a shock, given how low borrowing costs already are in many parts of the world. "Monetary policy space could be more limited in some jurisdictions, increasing the desirability that fiscal policy supplement it if a downturn materialises," he said.

Both of the candidates to become Britain`s next prime minister have promised higher spending and tax cuts to help the economy after Brexit. Sterling fell on Carney`s comments, hitting a two-week low against the U.S. dollar and pushing the 10-year gilt yield below the BoE`s Bank Rate - currently 0.75% - for the first time in a decade, according to data from Tradeweb. Investors put a 57% probability of a rate cut by the BoE by the end of the year, up from 41% earlier in the day. "I don`t think he is telling us that a rate cut is imminent but at the very least the balance of risks has changed," said Ross Walker, an economist with NatWest Markets.

Despite dovish signals from the U.S. Federal Reserve and the European Central Bank, the BoE has stuck to its message that rates will need to rise in a gradual and limited way if Britain manages to exit the European Union with a transition deal to absorb the economic shock.

Carney acknowledged the widening differences between that position and the more pessimistic view of investors, especially after Boris Johnson and Jeremy Hunt - the candidates to replace Theresa May as prime minister - said they were prepared to leave the EU without a deal if necessary. Carney said the central bank was working on the assumption that both candidates would achieve their stated aim of reaching a deal with the EU. If that happened, the outlook for Britain`s economy could improve quickly, which is why the BoE has not changed its main message about the outlook for rates.

"In the UK, the combination of the relatively strong initial conditions – including a tight labour market and inflation at target – and the prospect of greater clarity emerging in the near term regarding the UK and EU`s future relationship argues for a focus on the medium-term inflation dynamics," Carney said. He said the BoE would "explore how to best illustrate these sensitivities" in an August update of its economic forecast, when it would also assess the implications of the "global sea change" in concerns among investors about the economic outlook.

Carney also noted how sharply markets had reversed their bets on further U.S. rate hikes and were pricing in rate cuts by the Federal Reserve in the face of uncertainty. "In some jurisdictions, the impact may warrant a near-term policy response as insurance to maintain the expansion," he said.  "Markets are currently pricing in much more stimulus than this, suggesting greater pessimism about trade developments as well as potentially concerns about the absence of inflationary pressures."