May met fellow leaders on the sidelines of an EU summit in Gothenburg, Sweden, to try to break the deadlock over how much Britain will pay on leaving the bloc in 16 months. She signalled again that she would increase an initial offer that is estimated at some 20 billion euros, about a third of what Brussels wants. 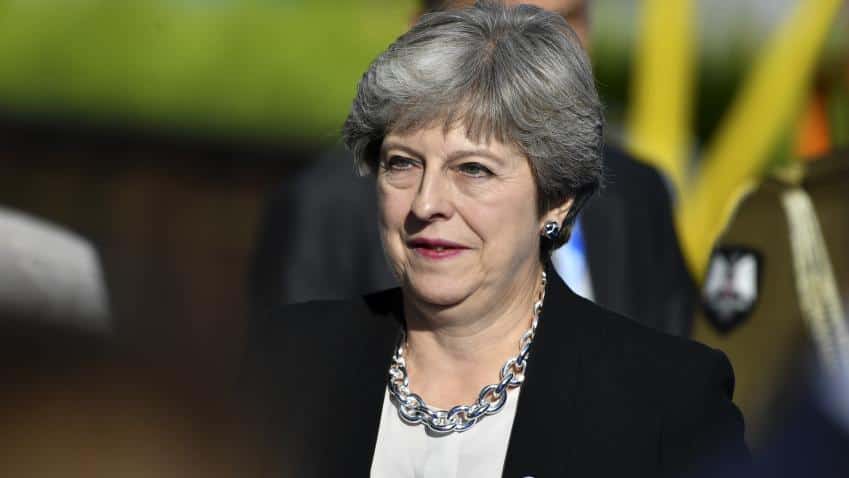 "There is more work to be done" to unlock Brexit talks, British Prime Minister Theresa May was told on Friday, as the European Union repeated an early December deadline for her to move on the divorce bill and border with Ireland.

May met fellow leaders on the sidelines of an EU summit in Gothenburg, Sweden, to try to break the deadlock over how much Britain will pay on leaving the bloc in 16 months. She signalled again that she would increase an initial offer that is estimated at some 20 billion euros, about a third of what Brussels wants.

But without any immediate plans to detail which financial commitments Britain was planning to cover and with a growing row with Ireland over their shared border, European Council President Donald Tusk, who coordinates Brexit for the bloc`s other 27 leaders, concluded Britain must take further steps.

He increased the pressure on May to make progress by early December, in time for the EU to react at a summit on Dec. 14-15, or risk losing a chance to push the talks to a discussion of future trade ties, something London desperately wants so it can offer some certainty to nervy businesses.

Asked about Brexit minister David Davis complaining that Britain had made "all the running" in finding compromises on the third key divorce issue -- the rights of expatriate citizens, Tusk said pointedly: "I can say only that I really appreciate Mr. Davis`s English sense of humour."

He told the news conference: "While good progress on citizens has been made, we need to see much more progress on Ireland and on the financial settlement.

"In order to avoid any ambiguity about our work calendar, I made it very clear to prime minister May that this progress needs to happen at the beginning of December at the latest."

It was an echo of the ultimatum issued by the EU`s chief negotiator, Michel Barnier, who a week ago gave Davis until the end of the month to detail the British approach to the financial settlement -- and effectively increase the money on the table.

But Tusk, who met May earlier on Friday, added another demand - more progress on the future status of the border between EU member Ireland and Northern Ireland, which Britain says is almost impossible to make without discussing the future trade deal as that would determine the kind of customs needed.

PRESSURE AT HOME, AWAY

Under pressure at home from lawmakers in her own party who are concerned she is preparing for Britain to walk away with no deal and from the EU, May has tried to gloss over the differences and emphasise how far the talks have come.

"We`ve agreed that good progress has been made. More does need to be done. But we`re clear, and I`m clear, that what we need to do is move forward together and that is how we can ensure that we are going to get the best deal for the United Kingdom and the European Union," May told reporters.

But a growing row with Ireland broke into the open on Friday, with Irish Foreign Minister Simon Coveney saying Dublin was not ready to allow the talks to move onto a discussion of future trade next month.

Prime Minister Leo Varadkar went further. "I can`t say in any honesty that it`s close on the Irish issue or on the financial settlement," he told Sky News.

"After 40 years of marriage, most of them good, now Britain wants a divorce but an open relationship the day after."

With German Chancellor Angela Merkel absent from the summit because of government formation talks in Berlin, it was left to French President Emmanuel Macron to speak for the heavyweight powers which are taking a tough line with London:

"We won`t change the agreed process in any way, and we won`t open talks on the future relationship as long as the conditions set in the first phase have not been met," he said Sweden.

But May, weakened after losing her Conservative Party`s majority at a June election she did not need to call, has little room for manoeuvre. Some of her team of ministers are pressing her to hold off from naming a figure, seeing it as one of the few levers Britain has to press for better trade deal.

Despite the tough language, Tusk offered some hope.

"I feel much better, safer after my meeting with Theresa May, everything is possible," the former Polish premier said.

"There was very visibly goodwill on both sides. We still have a chance to achieve our first goal -- to achieve the finalisation of the first phase of negotiations. I am very cautious. But optimistic."