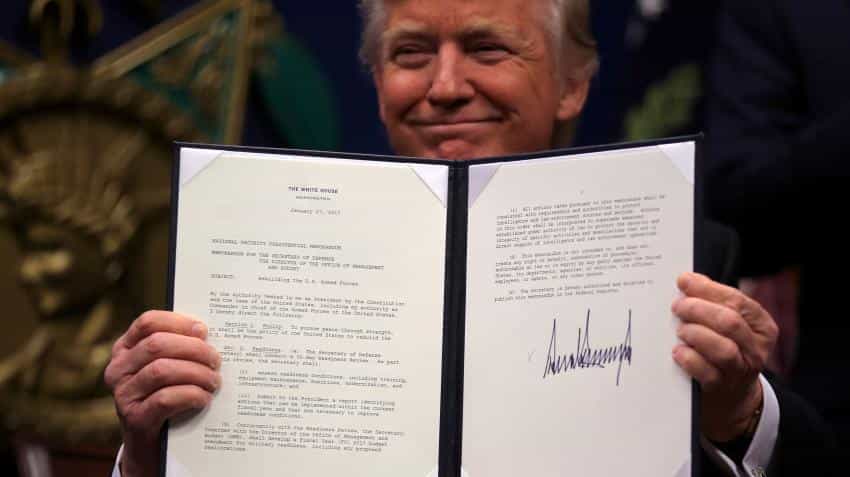 U.S. President Donald Trump shows an executive action he said would begin the rebuilding of the U.S. military after signing it. Image Source: Reuters
Written By: IANS
RELATED NEWS

US President Donald Trump said he had a "very good" telephonic conversation with his Mexican counterpart Enrique Peña Nieto amid a diplomatic spat over Washington`s plans for a border wall.

During a joint press conference with visiting British Prime Minister Theresa May on Friday, Trump confirmed that he and the Mexican president spoke for nearly an hour, Efe news reported.

The conversation came a day after Peña Nieto cancelled a planned visit to Washington in response to Trump`s signing an executive order to initiate his promised border wall and insisting again that Mexico would ultimately pay for the barrier.

Peña Nieto`s office issued a statement on Friday confirming the phone call and saying that the two presidents agreed to resolve their differences over the wall as part comprehensive discussions about all aspects of the bilateral relationship.

Trump and Peña Nieto also resolved to instruct their respective staffs not to make any further public comments about the issue of the wall, according to the Mexican government statement.

On Wednesday, the US president signed several executive orders affecting immigration, including one that assigns federal funds for the construction of the border wall.

In an interview with ABC News later that day, Trump said that while the US government would pay the initial construction costs, Mexico would ultimately reimburse Washington.

Peña Nieto has repeatedly insisted that Mexico will not foot the bill for the wall and did so again on Wednesday.

In a series of tweets on Thursday, Trump said Mexico should pay for the wall because it had long benefited from the North American Free Trade Agreement (NAFTA) at Americans` expense.

Citing the persistent US trade deficit with its southern neighbor, he said it would be better to cancel his January 31 meeting with Peña Nieto if Mexico refused to defray the cost of the wall.

Within hours of Trump`s tweets, Peña Nieto announced that he would not be travelling to Washington, though the US leader described the cancellation as a mutual decision.

"The president of Mexico and myself have agreed to cancel our planned meeting scheduled for next week," Trump said Thursday during a gathering with congressional Republicans in Philadelphia.

"Unless Mexico is going to treat the US fairly, with respect, such a meeting would be fruitless and I want to go a different route. We have no choice," the president said.

Later Thursday, White House spokesman Sean Spicer told reporters that Trump intended to impose a 20 per cent tax on imports from Mexico to cover the cost of the wall.

The tax, however, cannot be immediately levied because of NAFTA, the 1994 accord linking the US, Canada and Mexico that the president has repeatedly criticized as a destroyer of American jobs.