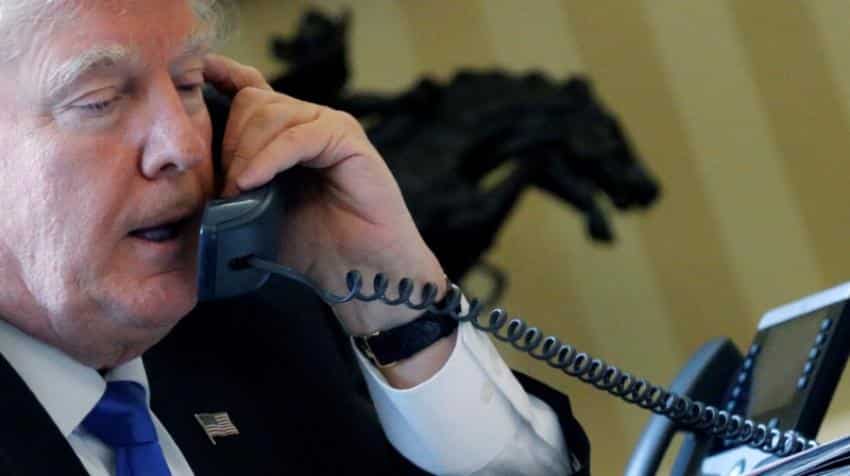 Russian President Vladimir Putin and his US counterpart Donald Trump agreed to work together to fight the Islamic State (IS) and other terrorist groups in Syria, as well as normalize bilateral relations, the Kremlin said.

A Kremlin summary of the phone also call also talked about the two leaders discussing several other subjects, CNN reported on Saturday.

Some of the other issues included restoring trade ties, international terrorism, the situations in Ukraine and the Korean Peninsula, and the coordination of military action against IS (Islamic State) and other terrorist groups in Syria.

The White House called the one-hour chat a significant start to improving a relationship "in need of repair".

In their first conversation on Saturday, over telephone, since Trump was inaugurated on January 20, the two leaders gave priority to battling what they agreed was their nations` gravest threat -- international terrorism, the Russian government said, Efe news reported.

The two leaders spoke on the civil war in Syria, where efforts to stamp out terrorist groups continue even though a ceasefire has been in place since December 30.

They also discussed the Arab-Israeli conflict, the Iranian nuclear deal, the conflict in Ukraine and nuclear non-proliferation.

Putin also addressed the "importance of re-establishing mutually beneficial economic and trade ties," according to the Kremlin, which said both sides expressed a willingness to work constructively and as equals to improve bilateral ties.

The Russian leader and the US president agreed to stay in regular contact and study a possible time and place for a face-to-face meeting.

The Kremlin did not say if the leaders discussed economic sanctions imposed by the US.

In 2014, the US imposed sanctions on Russia following the annexation of the Crimean peninsula, a move that followed a coup that installed an anti-Moscow regime in Ukraine.

Speaking on Friday at his first White House news conference, Trump indicated a willingness to work with Moscow.

However, he said it was "too early" to discuss removing sanctions that his predecessor, President Barack Obama, imposed on Russia.

Both Trump and Putin said before the call that they would like to see warmer ties between their two nations.

Relations between Trump and his team and Russia have been under scrutiny following allegations that Moscow meddled in the US election last year.

Following Trump`s electoral victory on November 8, US intelligence officials concluded that Putin was behind what it characterized as an effort to harm Democratic Party candidate Hillary Clinton`s prospects in the election and to discredit the democratic process.

Russia, which has consistently denied interfering in the election, reacted angrily to the sanctions and expulsions, but did not respond in kind.

Trump advisers suggested prior to the phone conversation that the issue of sanctions was on the table, but the president said Friday that it was too soon to make any firm statements in that regard.

Trump faces major domestic opposition to any rapprochement with Russia, with prominent members of his own Republican Party demanding Putin be labelled a war criminal over Moscow`s support for Syrian President Bashar al-Assad in his nation`s long-running armed conflict.