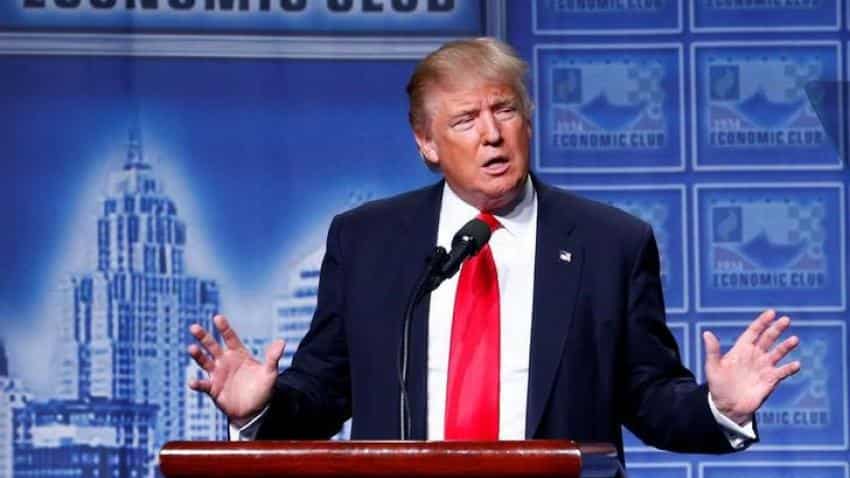 Republican presidential nominee Donald Trump on Monday sought to regain momentum with an economic speech in which he floated new tax breaks and cuts to regulation, as protesters repeatedly interrupted him.

Trump said his plan would include imposing a temporary moratorium on new federal regulations, reducing rates for income and corporate taxes, and establishing new provisions for working parents dealing with childcare costs.

He told the Detroit Economic Club, a traditional venue for political candidates to discuss their economic vision, that policies supported by Hillary Clinton, his Democratic opponent, had hurt Michigan`s economy.

"She is the candidate of the past," Trump said. "Ours is the campaign of the future."

Clinton will offer her own economic vision in a speech in Michigan on Thursday. In a statement ahead of Trump's speech, her campaign said his plan would give tax breaks to the wealthy and big companies, and would hurt working families and trigger a recession.

The Detroit speech was Trump's first on the economy since announcing a 13-man team of economic advisers last week, which held its first conference call on Sunday. It also came after what was widely seen as his worst week as a presidential candidate for the November 8 election.

"He's trying to rebuild momentum after his serious stumbles over the past 10 days," said Ron Bonjean, a Republican strategist in Washington. "This is to target voters in general that he`s not just live-tweeting his candidacy, that there is some deeper thought behind his efforts."

Trump got entangled in days of dispute with the parents of a Muslim American soldier who was killed in the Iraq war, and sparred with party leaders. Frustrated Republicans plan to put forth a conservative alternative to Trump, former top House aide and former CIA officer Evan McMullin.

His effort to move to a new phase of the campaign on Monday was marred by frequent outbursts from protesters. Trump waited for the interruptions to end, refraining from his practice at campaign rallies of asking security to "get them out of here."

Cut taxes
Trump on Monday proposed cutting the number of federal income tax brackets from seven to three and reducing the top rate to 33% from 39.6%. He had previously said he would drop that rate to 25%, an idea many tax experts said would dramatically reduce government income and balloon deficits.

He called for a new deduction for childcare costs. There is now a tax credit for child and dependent care, which is determined based on income and capped at expenses of $3,000 for one individual or $6,000 for two.

Trump also repeated his plan for a 15% corporate tax rate. The current corporate rate is 35%, and Republicans have long sought to reduce it.

The New York real estate developer, who has never held elected public office, touts his practical experience on economic matters and potential to create jobs, blaming President Barack Obama for what he calls a weak recovery from the economic recession.

Trump has vowed to rewrite some international trade deals, including the North American Free Trade Agreement with Canada and Mexico that was signed into law in 1994 by Clinton`s husband, then-President Bill Clinton. Critics blame NAFTA for costing American jobs.

Trump, whose core support is among white blue-collar workers, has long targeted Mexico with a signature, controversial proposal to keep illegal immigrants out by building a wall along the southern US border.