Trump's proposal, which he detailed in a speech in New York, would reduce the top individual rate to 33% from the current 39.6%. 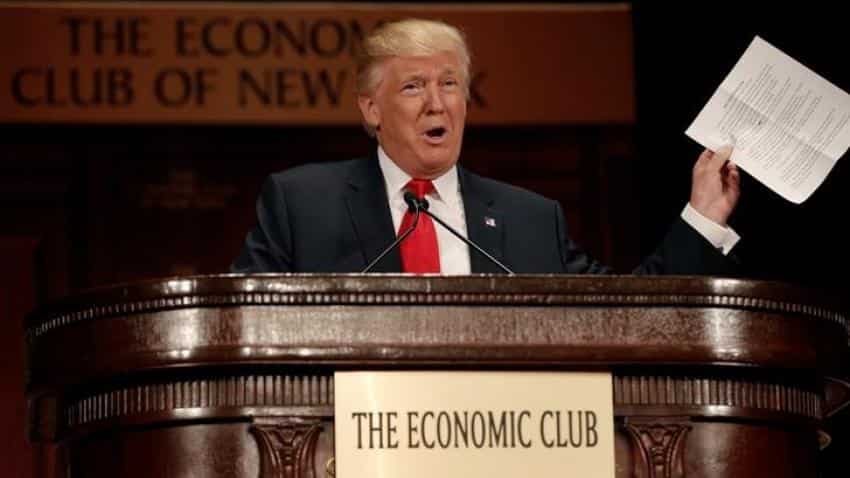 Trump's proposal, which he detailed in a speech in New York, would reduce the top individual rate to 33% from the current 39.6%. It would raise the standard deduction and cap itemized deductions, which he said would reduce tax loopholes. Trump said his plan would not add to the federal deficit.

But his estimate of the $4.4 trillion cost of the plan uses a mechanism known as "dynamic scoring," which assumes that tax cuts will lead to faster growth, which in turn will allow at least some of the tax breaks to pay for themselves.

Trump also offered a "Penny Plan" for cutting federal spending. He said he would shrink government programs outside of defense by 1% each year. But entitlement programs such as Social Security and Medicare would be shielded from any cuts.

The original tax plan laid out by the New York businessman last September was criticized by Democrats and Republicans alike for its costly price tag. Democrat Hillary Clinton, who will face Trump in the Nov. 8 election, denounced it as catering to the very wealthy and ignoring the working class.

Some economists also questioned the assumptions underpinning the plan he outlined on Thursday.

In his speech to the Economic Club of New York, Trump predicted his updated package to reduce taxes, curb government regulation and take a tougher stance on negotiating trade agreements would produce annual economic growth of 3.5 %.

"Everything that is broken today can be fixed, and every failure can be turned into a great success," Trump said.

He added the plan would create 25 million jobs over a decade. Trump set 4 % as a goal for economic growth, in a message reminiscent of that of his former Republican rival Jeb Bush.

The US economy last achieved 4 % growth during the administration of Democratic President Bill Clinton in the 1990s. The economy grew 2.4 % last year.

'It doesn't square'
Oren Cass, a fellow at the Manhattan Institute and domestic policy director of Republican Mitt Romney’s 2012 presidential bid, said the plan for 1 % cuts in some programs would not be enough to pay for Trump's proposals.

"It doesn`t square," Cass said. "The penny plan is an idea that’s been out there for a while, but it does touch entitlement spending as well."

Maya MacGuineas, president of the bipartisan Committee for a Responsible Federal Budget, welcomed the scaling back of Trump`s original tax-cut proposals but said the plan would still leave the country on an unsustainable budget path.

"He's moving in the right direction by pursuing a less costly tax plan and identifying some spending cuts to help pay for it. But the plan appears to rely on rosy assumptions and murky policy changes," she said in a statement.