ThyssenKrupp lifted by record orders as shifts from steel

Thyssenkrupp is in the middle of a major shift under Chief Executive Heinrich Hiesinger towards technology and away from the more volatile steel industry, its traditional mainstay. 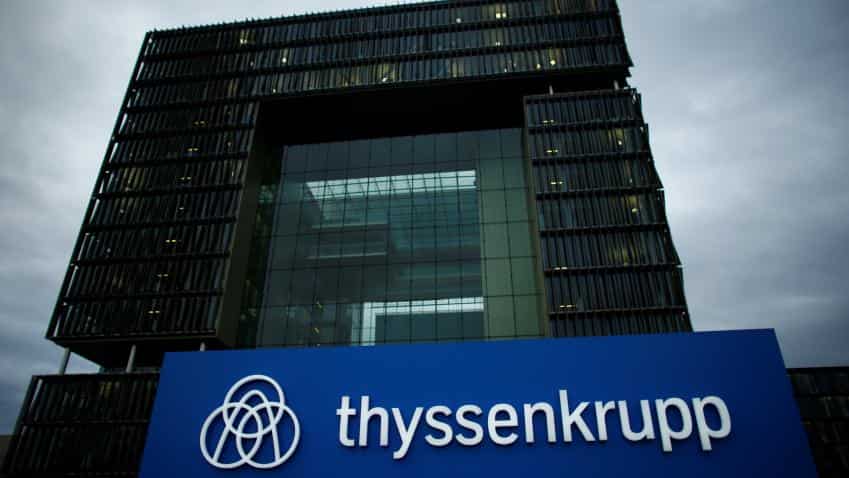 A logo of ThyssenKrupp AG is pictured outside their headquarters in Essen. Image source: IANS

Thyssenkrupp is in the middle of a major shift under Chief Executive Heinrich Hiesinger towards technology and away from the more volatile steel industry, its traditional mainstay.

It has sold its money-losing Brazilian steel mill CSA Cia Siderúrgica do Atlántico SA to Ternium SA and struck a deal to combine its European steel businesses with that of India`s Tata Steel in 2018.

"The structural problems in the European steel industry have not gone away. We still have significant overcapacities also on the European flat steel market," Hiesinger said on Thursday.

But labour representatives are demanding job protection for workers and say Thyssenkrupp is shirking responsibility for a business whose roots go back more than 200 years.

Hiesinger said he remained confident an agreement with workers can be found as thousands were expected to stage demonstrations at Thyssenkrupp`s tin plate production site in Andernach, calling for job and plant guarantees.

"All conceivable alternatives would involve far greater job cuts," Hiesinger said, referring to 2,000 job losses that were already announced along with the joint venture in September.

Shareholder Cevian, which holds around 18 percent of Thyssenkrupp, described the results as concerning, saying management had set a target four years ago to achieve operating margins of 6-7 percent but was only making half that.

"The strategy has not yet delivered what was promised" Cevian co-founder Lars Foerberg told German daily Handelsblatt in an interview.

He said while the company had found a good solution for the steel division, it needed to look at finding the right structure for its other divisions to become more competitive.

"There are various options to find the right structure. A joint venture, decentralised company structure, spin-off. The main point is that old-style conglomerates don`t work," he said.

The chief executive of Siemens also said earlier this month that he saw no future for old-school conglomerates.
CATCHING A LIFT

While slowly reducing its dependency on steel, Thyssenkrupp is staking its future on its elevators unit, its most profitable, as well as demand from the automotive sector, its biggest customer group accounting for about a quarter of sales.

ThyssenKrupp`s order intake rose 18 percent to 44.29 billion euros ($52 billion) in the financial year to Sept. 30 while adjusted earnings before interest and tax (EBIT) reached 1.91 billion euros, beating the 1.73 billion expected by analysts in a Reuters poll.

Operating profit at its elevators unit, which mostly caters to clients in the United States and Europe with its internet-connected elevators, rose 7 percent to 922 million euros, making it the group`s single biggest profit contributor.

At its components technology unit, which supplies parts to nine out of 10 premium cars, including all models of electric car maker Tesla, operating profit grew 12 percent to 377 million euros.

Shares in the group turned positive after sharp early falls, and closed up almost 4 percent. "The numbers came out better than feared, although the outlook could disappoint people a bit," said one trader.

Thyssenkrupp, which recommended an unchanged dividend of 0.15 euros per share, said it expects adjusted EBIT this year of 1.8-2.0 billion euros while analysts on average expect 2.03 billion euros.