Britain's second-ever female Prime Minister since Thatcher's term in 1979-1990 is widely expected to champion the cause of women in politics and a series of female Tory MPs are set for prominent roles in her Cabinet. 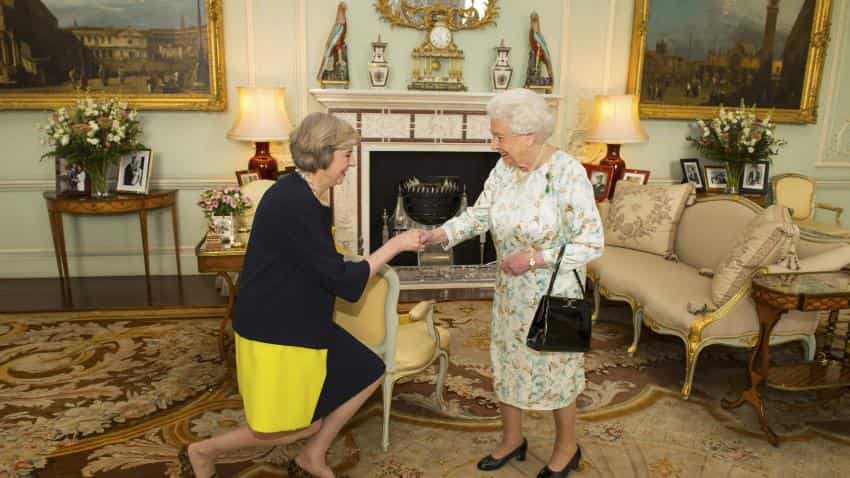 Britains Queen Elizabeth welcomes Theresa May at the start of an audience in Buckingham Palace, where she invited her to become Prime Minister. Photo: Reuters/Dominic Lipinski
Written By: PTI
RELATED NEWS

Theresa May becomes Britain's second woman prime minister after Margaret Thatcher as the tough-talking leader took charge on Tuesday with a heavy workload already waiting in her in-tray after the Brexit vote.

Theresa May is Britain's prime minister after she accepted the invitation from Queen Elizabeth to form government.

The 59-year-old Conservative party leader's first task will be to put in place a frontline team that can help her through the challenges of negotiating Britain's exit from the European Union, having promised that "Brexit means Brexit".

Britain's second-ever female Prime Minister since Thatcher's term in 1979-1990 is widely expected to champion the cause of women in politics and a series of female Tory MPs are set for prominent roles in her Cabinet.

Indian-origin employment minister, Priti Patel, can expect a promotion from a junior ministerial role under David Cameron, who had given her the special distinction of being able to attend Cabinet meetings and also appointed as his Indian Diaspora Champion.

The 44-year-old Gujarat-origin MP was a significant pro-Brexit voice, who had recently thrown her support behind May as the ideal candidate to become the Prime Minister, likening her to her predecessor Margaret Thatcher described as the Iron Lady of British politics.

May is expected to ensure stability for many roles, while putting her own stamp on the Prime Minister's office.

May has been in British Parliament as MP for Maidenhead since 1997 and under outgoing Prime Minister David Cameron, she has been the longest-serving home secretary for Britain in 50 years.

She has worked with the Bank of England in the past before entering front-line politics.

May emerged as the prime minister designate on Monday after her only rival, Andrea Leadsom, withdrew from the Conservative party leadership race triggered by the UK's referendum last month in favour of Brexit.

Meanwhile, David Cameron in his last address to parliament, said he would advice his successor that British trade, cooperation and security would be best served by a close relationship with Europe.

"My advice to my successor, who is a brilliant negotiator, is that we should try to be as close to the European Union as we can be, for the benefits of trade, of co-operation and of security," he said.

Cameron, who had campaigned for Britain to remain a part of the economic bloc, had announced he will be stepping down for a new PM to handle the Brexit negotiations.

May's spokesperson said work is already under way to set up a new department dedicated to negotiating Britain's exit from the 28-member European Union.

"Civil servants have already been charged with finding a building to house the Brexit department ? an indication of May's commitment to get on with delivering the verdict of the EU referendum. Brexit means Brexit and we're going to make a success of it," the spokesperson said.

Tough-talking May is expected to bring a very different flavour to Downing Street, with her penchant for flamboyant shoes and no-nonsense attitude.

The fashion-conscious politician is known for her love of kitten-heel shoes and designer outfits and also enjoys cooking and mountain walks in her spare time.

Like her predecessor, she is reportedly fond of Indian food and is likely to keep up the tradition of ordering Indian takeaway meals to Downing Street.

She is the daughter of a vicar, who died in a car accident in 1981 and she lost her mother months later. She went on to study geography at St Hugh's College in Oxford University and began her political career stuffing envelopes at her local Conservative Association before becoming a councillor in the London Borough of Merton from 1986 to 1994.

May is married to banker Philip May and the couple have no children. They share a love of cricket ever since they met at a?Conservative Association dance party?and have been married for 36 years.

They are based in Sonning, Berkshire, but will soon be moving into their new home at Downing Street.

May had campaigned alongside Cameron in favour of remaining within the EU but from a distance.

This is seen as one of the main reasons why she emerged as a consensus candidate among all sides of the Conservative party.

She describes herself as a quiet woman who does not spend too much time "down the pub" with colleagues but just gets on with the job.

Her tough-talking image follows her track record as home secretary, having successfully deported radical Islamist preacher Abu Qatada to Jordan and pushing ahead with some tough immigration legislation.

In recent years, her backing for legalising same-sex marriages in Britain is seen as an indicator of her balanced political views.