The stock of Takata fell down 17% on the Tokyo Stock Exchange on Thursday on the back of bankruptcy restructing plan. 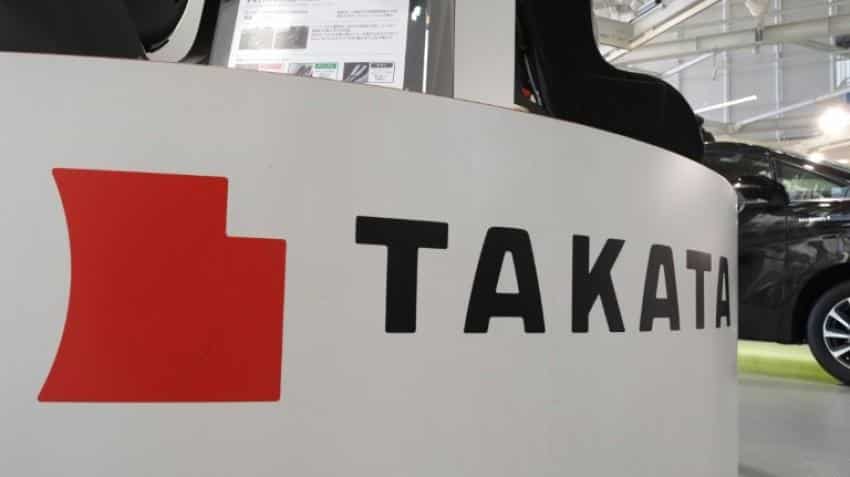 The stock fell by its maximum daily loss limit to close at 717 yen, after trading was suspended in the morning session following the rescue plan report by Japan`s Nikkei business newspaper. Image Source: AFP
Written By: AFP
RELATED NEWS

Takata shares plunged 17% on Thursday on a report that two suitors are set to propose a bankruptcy restructuring plan for the airbag maker at the centre of the biggest-ever auto safety recall.

The stock fell by its maximum daily loss limit to close at 717 yen, after trading was suspended in the morning session following the rescue plan report by Japan`s Nikkei business newspaper.

According to earlier AFP report, Takata shares did not trade at the start on Thursday as the Tokyo Stock Exchange suspended activity. They closed at 867 yen ($7.50) on Wednesday.

The huge recall came after the discovery of a defect in Takata airbags that can cause them to inflate with excessive force, sending metal and plastic shrapnel from the inflator canister hurtling towards drivers and passengers.

The problem has been linked to at least 15 deaths and scores of injuries worldwide, it said.

Thursday`s report in the Nikkei, which did not cite sources, said a committee charged with Takata`s overhaul has been mulling proposals from five possible investors, but that Autoliv and the Key Safety camp are the only candidates remaining.

After consulting with automakers and Takata`s founding family, the committee plans to make a final decision on the proposals as early as February, the story said.

Takata declined to comment on the details of the article.

"The report is not what we have announced, and we have not heard the (two) proposals," a Takata spokesman told AFP.

Last week, Takata agreed to plead guilty to fraud and pay $1 billion to settle the faulty airbag scandal with US regulators, but that was not likely to be the end of its liabilities over the affair.