Switzerland's smallest museum is a window in 600-yr-old house

Hoosesagg Museeum, which translates into "Pant Pocket Museum" in English, is perhaps the smallest museum in Switzerland - indeed in the world too. 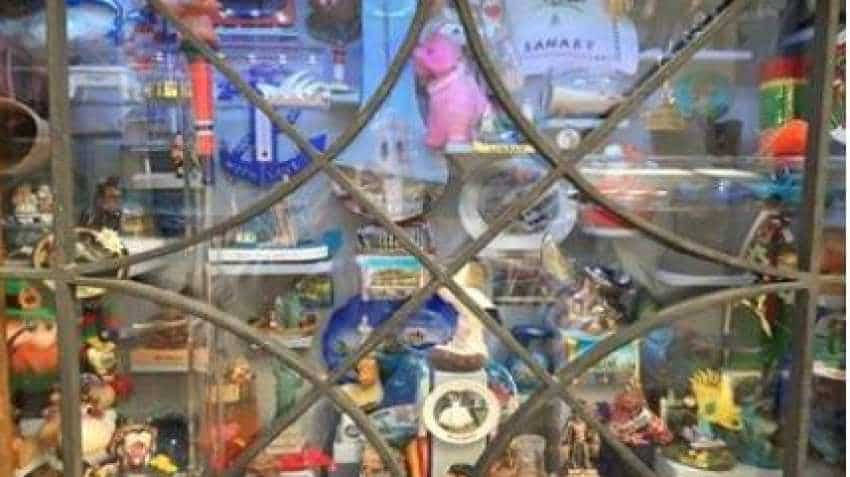 There`s no admission fee, but there`s also no admission at all because the entire museum is contained within a two-feet-by-two-feet window covered with an iron grill in the door of a 600-year-old house. Image source: IANS
Written By: IANS

Hoosesagg Museeum, which translates into "Pant Pocket Museum" in English, is perhaps the smallest museum in Switzerland - indeed in the world too. There`s no admission fee, but there`s also no admission at all because the entire museum is contained within a two-feet-by-two-feet window covered with an iron grill in the door of a 600-year-old house, located in a narrow pedestrian alley in Basel`s Old Town.

Every few months, new items appear in the window at 31 Imbergasslein (Ginger Alley). The Vergeat family has been living in this house for 35 years and have run the museum for 24 years. Many of the displays come from the couple`s own assemblage of memorabilia but they welcome outside contributions.

Dagmar, the lady of the house, handles the administrative part of the museum and her husband Matthias takes care of the creative part.  "I am the creative director of this museum and my wife takes care of the administrative part. She is responsible for what has to be displayed. Apart from that she takes care of the promotion of this museum through social media and answers the calls of people from all over the world eager to display their collections. She selects the things and then it`s my job to place them in the museum," Matthias told IANS.

Dagmar has been fond of collecting things since her childhood and this is reflected in a room just behind the museum - objects hang from the ceiling and are arranged in display cases; wrist watches surround bottle stoppers with carved faces; there are tea eggs, a spectrum of plastic sunglasses, Rubik`s cubes, toy televisions, bells and Dagmar`s most favourite collection of kings.

This room was occupied by the Vergeats` eldest daughter till she got married and moved out in 1995. That was a time when passers-by often stopped to gaze at a fresco of Saint Christoffel (Christopher) carrying Jesus on his shoulder - the only such in Basel - which annoyed Dagmar considerably but also laid the seed of the museum.

"My husband and I moved into this house in 1986. This is a rented house from the government and has historical value: Basel`s first midwife lived in number 31. Architects also stopped outside to study the structure`s painted facade. My house was unique in architecture and thus was the centre of attraction for people. The fresco by the third-floor windows was the main attraction because it is the only such in the city," Dagmar said.

"It`s an interesting and even frustrating story. While most tourists kept their eyes on St. Christoffel, I discovered that others couldn`t stop themselves from peering into the ground-floor windows. That annoyed us because at that time our children were small and they often got disturbed. So, instead of blocking the view with curtains, my husband and I decided to build a display case that fit over the windowpane in the door," she said.

Dagmar first tried using her new display case to sell masks worn during the Basel Carnival (in March), ice skates, and other second-hand items. When no one rang the doorbell to ask about the goods, she put one of her collections on the window.

"The first display was schnapps glasses," she says. "We left (them) for three, four, five months, and then thought, `It`s boring, always having the same thing`. We decided that we will change the collection four or five times in a year. In between, we have our own display of collections at the time of Christmas."

Since most items displayed could fit in a pocket, they named the display the Pant Pocket Museum. "After about six months, people started ringing the doorbell to ask if they could show their collections. In the beginning, the Pant Pocket Museum featured lots of animal-themed collections, like elephants, rubber ducks, donkeys but later people came with collections like Ferrari cars and the like," said Dagmar.

Today, those interested in showcasing their collections email Dagmar photos of their objects. If approved - Dagmar estimates a 95 per cent acceptance rate - they bring her around 50 items, and she selects between 30 and 35 to create an exhibit. Collectors have travelled from Zurich and Germany with their thimbles, Pokemons, porcelain shoes, tiny perfume bottles and what have you.

Next on display will be heart-shaped stones sent by a woman in Finland. "Look at them carefully - don`t they look like hearts? This is what I love to display in my museum. It`s very different and are not displayed in any other museum," she said. Beyond curating the tiny window, Dagmar works a part-time office job, spends time with her grandchildren, gardens and skiis, and during the Basel Carnival, runs a bistro behind the house. She also hosts cocktail hours and the occasional dinner for up to eight people in the room behind the Pocket Museum door.