The MSCI`s broadest index of Asia-Pacific shares outside Japan was flat in early trade, while Japan`s Nikkei dropped 0.1%. 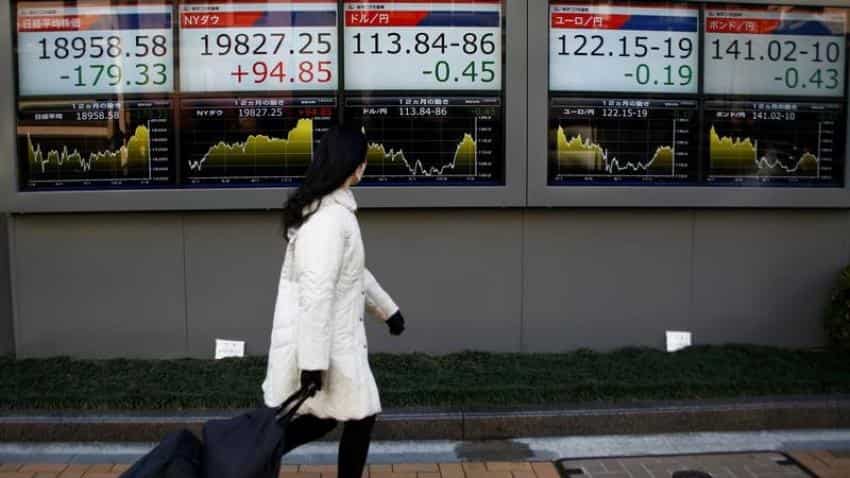 Sterling slipped on Tuesday after Britain`s parliament paved the way for Prime Minister Theresa May to launch divorce talks with the European Union, while stocks were subdued ahead of an expected US interest rate later in the week.

The pound retreated 0.1% to $1.2201 after both houses backed the so-called Brexit bill, opening the door for May to start the clock on the required two-year negotiation period by the end of this month.

The euro hovered at $1.06545, failing to regain any of Monday`s 0.2% loss. On Monday, sterling had jumped 0.36% after Scotland`s First Minister Nicola Sturgeon demanded a new independent referendum in late 2018 or early 2019, once the terms of the UK`s exit from the EU are clearer.

The MSCI`s broadest index of Asia-Pacific shares outside Japan was flat in early trade, while Japan`s Nikkei dropped 0.1%.

Investors in Asia were also awaiting manufacturing, retail sales and investment data out of China at 0200 GMT for a reading on the strength of the world`s second-largest economy, after strong gains in import and producer price reports last week.

Overnight, Wall Street was mixed, with the Dow Jones Industrial Average down 0.1%, while Nasdaq rose 0.24% and the S&P was little changed.

With an interest rate hike this week by the Federal Reserve fully priced in, markets are focused on signals from the central bank about the pace of future rises.

Elsewhere in currencies, the dollar was steady at 114.84 yen , after touching a seven-week high on Monday on expectations of a Fed move at the end of a two-day meeting on Wednesday. It fell back to close slightly lower in the previous session.

The dollar index was fractionally higher at 101.37, extending Monday`s gains following a bout of profit taking at the end of last week.

Markets are also awaiting a meeting of the Group of 20 finance ministers and central bankers in the German town of Baden Baden starting on Friday, their first meeting since Donald Trump won the US presidential election.

US Treasury Secretary Steven Mnuchin will be "pushing hard" to advance US interests in his debut G20 meeting, including reaffirming commitments to avoid competitive currency devaluations, a senior Treasury official said on Monday.

In commodities, oil prices dipped 0.1%. They touched a 3-1/2-month low in the previous session as concerns about rising US production offset optimism about supply cuts by the Organization of Petroleum Exporting Countries.

The looming US rate increase weighed on gold . The precious metal inched down 0.1% to $1,201.91 in early trade, adding to Monday`s losses.