The Singapore-based airline was presented with the award on Tuesday at a ceremony in London, said Business Insider, adding that no US airline cracked the top 35. For those who want to know, there was no Indian airline in the top 50 either. IndiGo was present in the top 100 list at the 55th spot, a jump by 2 spots from 2017. Notably, Air India was nowhere in the list. Jet Airways fell to 80 from 73 in 2017. 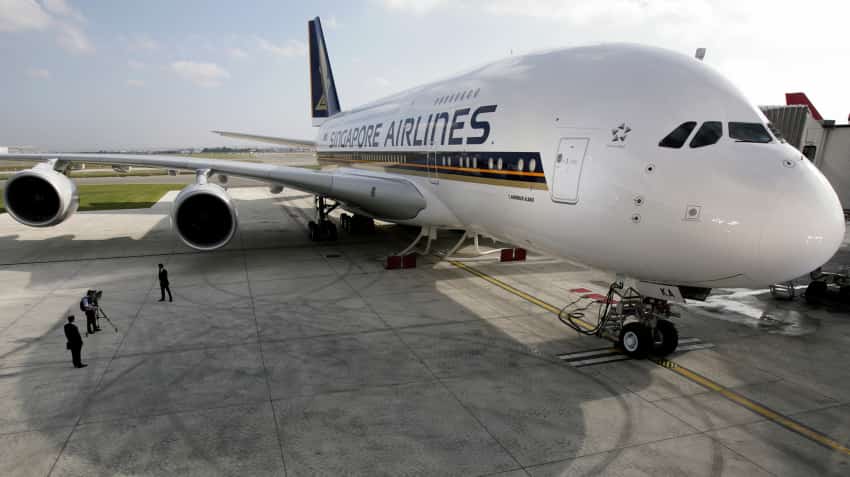 Singapore Airlines has been adjudged the best airline in the world for year 2018, according to leading consumer-aviation website Skytrax' ranking. Image source: Reuters
Written By: ZeeBiz WebTeam
RELATED NEWS

Singapore Airlines has been adjudged the best airline in the world for year 2018, according to leading consumer-aviation website Skytrax' ranking. The Singapore-based airline was ranked second in 2017, while in year 2004, 2007 and 2008 also it had earned laurels at the top. Interestingly, airlines from Asia dominate the Skytrax's rankings, taking 9 out of the top 10 spots.

The Singapore-based airline was presented with the award on Tuesday at a ceremony in London, said Business Insider, adding that no US airline cracked the top 35. For those who want to know, there was no Indian airline in the top 50 either. IndiGo was present in the top 100 list at the 55th spot, a jump by 2 spots from 2017. Notably, Air India was nowhere in the list. Jet Airways fell to 80 from 73 in 2017.

"Singapore Airlines is honored to be named World's Best Airline in the Skytrax awards, and I dedicate it to the 26,000 SIA Group employees who focus every day on delivering the world's best travel experience to our customers," Singapore Airlines CEO Goh Choon Phong said in a statement, adding "The recognition will further motivate us to improve upon the three main pillars of our brand promise - product leadership, service excellence and network connectivity - to ensure we retain our competitive advantage and continue to meet and exceed customer expectations." Here is the list of 10 best airlines in the world, according to the results of the Skytrax survey:

Singapore's standout service makes for a famously pleasant journey during which flight attendants are trained to treat customers with extreme care and respect. Personal TVs with plenty of entertainment options and hot towels served before take-off are just some of the economy perks.

The Qatar Airways falls back one spot to second. The Doha-based airline received praise from reviewers for its seat comfort and in-flight entertainment. The airline boasts the second best in-flight entertainment system and economy class offering in the world The airline links over 150 destinations across the globe and is expanding its fleet to include the latest generation of long-haul airliners including the Boeing 787 Dreamliner and Airbus A350. Qatar also took home the award for Best Airline in the Middle East, World's Best Business Class, and Best First Class Airline Lounge.

The All Nippon Airways (ANA) continues its march towards the top of the rankings. The largest international carrier in Japan and home to one of the world's largest fleets of Boeing 787 Dreamliners, ANA drew high praise from Skytrax reviewers across the board for cleanliness, service, and safety. Many of its planes feature slide-forward-style reclining seats that increase overall privacy, as well as power and USB outlets even in economy. ANA also won Best Airline Staff in Asia and Best Cabin Crew in Japan.

Over the past 30 years, Dubai's Emirates has developed into one of the world's premier long-haul carriers. Operating almost exclusively through its palatial hub at Dubai International Airport, the carrier boasts the world's largest fleet of Airbus A380 superjumbos and Boeing 777 wide-body jets. Emirates' state-of-the-art in-flight entertainment system includes a wide selection of video and music options on demand, and even allows for live television and sporting events on its "ice" entertainment system-equipped aircraft. In fact, Emirates has taken home Skytrax's award for Best In-Flight Entertainment 14 years running.

Founded in 1989, Taiwan's EVA Air (pronounced ee-vee-ay) is an offshoot of global container-shipping giant Evergreen Group. The Taipei-based carrier has grown immensely in the past two decades and now operates a large fleet of Airbus and Boeing wide-body jets. The airline is credited with pioneering the "premium economy" cabin.

Based in Hong Kong, Although Cathay Pacific fell back one spot from last year, but the airline still retains its place as one of the most respected carriers from the Pacific rim. With a fleet of long-range Boeing 777-300ER jets and a business strategy centered on offering a high frequency of flights, Cathay is one of the finest flying experiences in Asia. Skytrax reviewers gave the airline high marks for seat comfort, service quality, and in-flight entertainment.

Europe's largest airline has surged into the top 10 over the past couple of years. Customers have praised Lufthansa for its exceptional service and overall product quality. For the most part, Lufthansa's long-haul service is good, but, for the best results, it would be wise to aim for the fleet's newer A380 superjumbos and 748-8 Intercontinental jumbo jets. In addition to a top-10 finish, the German national airline also took home the prize for Best Airline in Europe and Best Business Class in Europe.

Hainan is the only Chinese airline to hold the coveted Skytrax five-star rating. In four short years, the airline surged from 22nd place all the way into the top 10. With a brand-new fleet of more than 160 Boeing and Airbus jets, Hainan, founded in 1993, is expanding rapidly throughout Asia, Europe, and Australia. Reviewers on Skytrax praised the airline for its attentive service and quality business class accommodations. Hainan also won the awards for Best Airline in China and Best Airline Cabin Crew in China.

In recent years, Garuda Indonesia has undertaken extensive fleet renewal and service improvement measures to regain the trust of both fliers and safety regulators. Economy fliers have raved about the airline's comfortable seats and selection of Southeast Asian cuisine. In 2018, Garuda's flight attendants took home the award for the World's Best Cabin Crew for the third year in a row.