Qatar has the added challenge of a diplomatic, trade and transport boycott imposed on the Gulf Arab state by Saudi Arabia, the United Arab Emirates, Bahrain and Egypt over allegations that Doha supports Islamist militants, a charge Qatar denies. 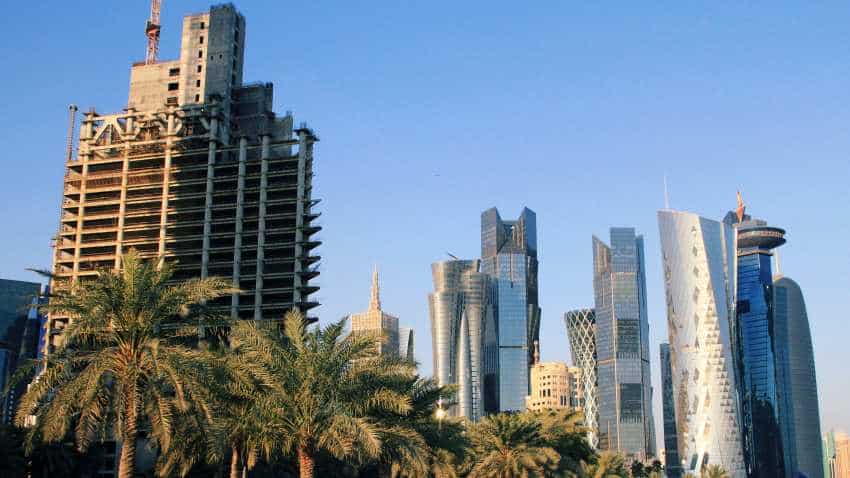 The property downturn has so far not translated into bad loans, as bankers say borrowers holding sluggish real estate assets tend to be among the country`s wealthiest. Image source: Reuters

Qatar`s Doha Tower, a spike-tipped cylinder that glows orange at night, won an award when finished in 2012 amid a Gulf-wide real estate boom, but today about half of its 46 floors are empty. The office tower, now a familiar part of the capital`s high-rise skyline, has run foul of what real estate brokers, bankers and analysts say is an oversupplied Qatar property market ahead of the 2022 World Cup that mirrors a real estate downturn in the wider Gulf region after a drop in oil prices.

Qatar has the added challenge of a diplomatic, trade and transport boycott imposed on the Gulf Arab state by Saudi Arabia, the United Arab Emirates, Bahrain and Egypt over allegations that Doha supports Islamist militants, a charge Qatar denies.

The protracted row has made it tough to lure would-be foreign buyers of residential or commercial space. Residential prices are down about 10 percent from June 2017, when the boycott began, and office prices have fallen by a similar rate, according to analysts and economists. Rents are down 20 percent from three years ago, they say.

"Qatar`s property sector has been one of the main casualties from the blockade that was imposed in mid-2017," Jason Tuvey, an economist at Capital Economics, said.

The property downturn has so far not translated into bad loans, as bankers say borrowers holding sluggish real estate assets tend to be among the country`s wealthiest.

"They have capacity to withstand the market ... I don`t see a major threat," Doha Bank CEO Raghavan Setharaman said, when asked about his view of the real estate market.

A banker at Al-Khalij Commercial Bank said banks like his have been restructuring many property loans in recent months, extending them to 20-year payment periods from 10 in some cases, to keep business moving for developers hit by slow demand.

But with the World Cup edging closer, real estate experts say long-planned projects are now set to flood the market, even as buildings in prime locations, like Doha Tower, sit idle.

"It`ll be interesting to see what happens when they (real estate prices) are really put under pressure in a year`s time, when a lot of new supply hits the market," Johnny Archer, Associate Director of DTZ, a Doha-based real estate firm, said.

WORLD CUP FRENZY
Tiny but wealthy Qatar, the world`s top liquefied natural gas exporter, plans to increase residential space by about 50 percent and office space by 40 percent in the next three years, partly on expected demand from the World Cup, according to a report published last week by real estate company DTZ.

The lion`s share of construction underway is for high-end residential towers, white-collar office space, and luxury hotels and shopping malls.

FIFA requires Qatar have at least 60,000 hotel rooms in place for the month-long World Cup tournament, which Qatar estimates will draw about 1.5 million fans - more than half of its roughly 2.6 million population.

Qatar has about 26,500 rooms and will add another 15,000 by 2022, DTZ`s report estimated. The rest will be met by rooms aboard cruise ships and in desert camps, according to the local World Cup organising committee. These camps are expected to be bedouin-style accommodation to give visitors a taste of desert life.

Much of the building is in an entirely new city, Lusail, a 38-square kilometre stretch just north of Doha dotted by commercial towers, hotels, and shopping centres at various stages of construction.

Lusail is being developed by state-controlled Qatari Diar Real Estate Company, which envisions it hosting 200,000 residents and 170,000 employees. It is anchored by Qatar`s largest World Cup stadium, an 80,000 seat venue that will host the opening and closing matches.

Colliers International, whose office was an early entrant to Lusail, says getting companies to fill a rush of towers coming online ahead of 2022 will be a daunting task.

Shopping malls, lacking the Saudi or Emirati shoppers who once flocked to them before the boycott, are among the most visibly affected, with some having to shutter shops in recent months. New malls are being built anyway.
Total retail space has doubled in three years and will grow 50 percent more by 2021 with nine new malls, according to DTZ.

Beyond 2022, Qatar real estate faces an uncertain outlook. Aside from soccer stadiums, Qatar has not specified legacy plans for what happens to infrastructure developed for the World Cup after the tournament.
"There`s too much uncertainty as to where that demand specifically is going to come from," Richard Rayner, who surveys property for DTZ said.