Protests erupt in Athens ahead of new austerity measures vote

The protest was held during a three-day general strike against pension cuts and the introduction of new taxes that shut down media outlets, public transport, and ferry service. 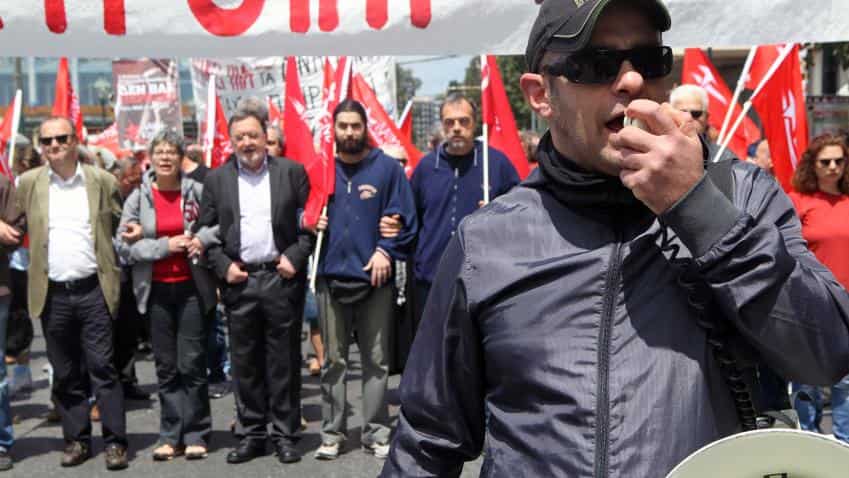 Minor scuffles prompted by a group of anarchists have broken out in Athens, as thousands of people took to the streets to oppose a vote on new austerity measures that Greece`s creditors are demanding.

Thousands of people gathered in front of the Greek parliament in Athens ahead of the vote due on Sunday night. At some point, the rally took a violent turn when protesters, supposedly from an anarchist group, started throwing flares, Molotov cocktails, stones, and other objects at the parliament building and police officers. The police responded with tear gas and flashbangs, RT online reported.

The protest was held during a three-day general strike against pension cuts and the introduction of new taxes that shut down media outlets, public transport, and ferry service.

Security measures and police presence in the city have been increased over recent days out of fear of public disorder, especially at the prime minister`s residence and parliament.

The reform, to be voted on on Sunday, will reduce Greece`s pension payouts, merge pension funds, and raise taxes for medium and high income individuals.

Speaking to lawmakers on Friday, Greek Prime Minister Alexis Tsipras defended the changes, saying that they won`t affect the poorest.

The reforms are part of a package deal agreed upon with the EU and IMF last July. It is the third bailout for Greece, which has been burdened with debts since 2010.