In February, Trump promised to release a "phenomenal" tax plan within a few weeks, without offering details. But none emerged. 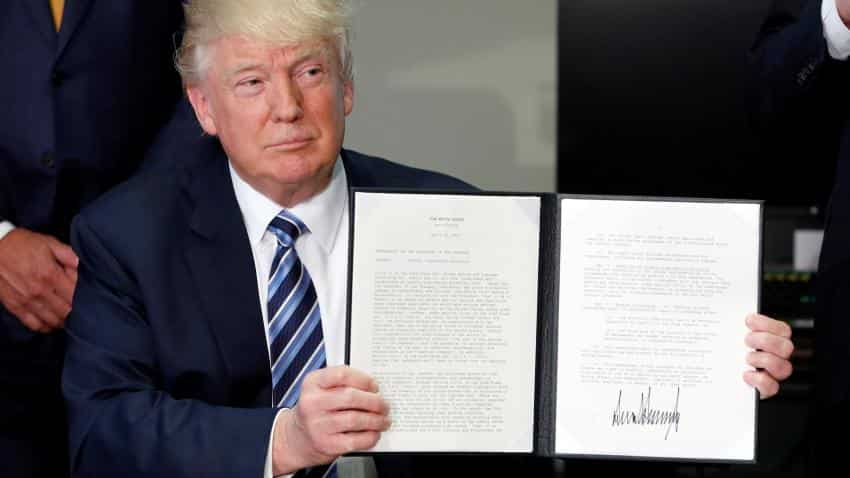 President Donald Trump holds up an executive order after signing it during a ceremony with Treasury Secretary Steve Mnuchin at the Treasury Department in Washington, U.S., April 21, 2017. Photo: Reuters/Aaron P. Bernstein
Written By: Reuters
RELATED NEWS

President Donald Trump on Friday promised a big announcement about tax reform next week and ordered an administration review of Obama-era tax rules written to discourage US companies from relocating overseas to cut their tax bills.

"We'll be having a big announcement on Wednesday having to do with tax reform. The process has begun long ago, but it really formally begins on Wednesday," Trump said during a visit to the US Treasury Department.

First reported in an Associated Press interview with Trump, the news came as a surprise to lobbyists and congressional aides who had no idea what Trump's announcement might include.

In February, Trump promised to release a "phenomenal" tax plan within a few weeks, without offering details. But none emerged.

A White House official said the impending announcement could come later than Wednesday, adding: "The president was saying what we've been saying all along, that he wants to do tax reform as quickly as possible while still doing it right."

Trump's latest comments got a warm reception from the Republican tax chief in the House of Representatives.

Brady added that the panel's Republican members "are ready to work with President Trump and his team."

During the 2016 election campaign, Trump initially issued a plan that proposed deep cuts in tax rates for individuals and corporations, a reduction in the number of tax brackets to four from seven, repeal of the estate tax, an offshore profits repatriation tax holiday for multi-nationals and a cap on the deductibility of business interest. He later revised the number of tax brackets to three.

Trump on Friday also signed an executive order directing the Treasury to review tax-related regulations adopted over the past 18 months under former President Barack Obama.

Asked if that would include rules against tax-driven foreign corporate deals known as inversions, Mnuchin said: "It`s one of the significant things and one of the things we would be looking at."

Trump and Republicans in Congress view tax reform as the best vehicle for eliminating what they say are tax incentives for U.S. companies to move their headquarters, manufacturing facilities and jobs overseas.