Pakistan plane crash in Karachi: Many people are feared dead after a Pakistan International Airlines (PIA) Airbus A320 plane with 107 people on board crashed into a densely populated residential area near the Jinnah International Airport here on Friday, officials said 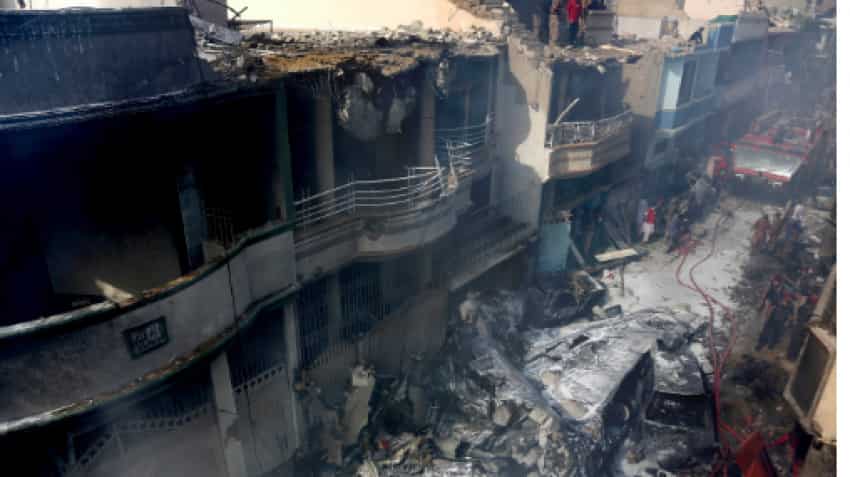 Flight PK-8303 from Lahore was about to land in Karachi when it crashed at the Jinnah Garden area near Model Colony in Malir, just a minute before its landing. Source: PTI
Written By: PTI
Edited By: ZeeBiz WebTeam
RELATED NEWS

Pakistan plane crash in Karachi: Many people are feared dead after a Pakistan International Airlines (PIA) Airbus A320 plane with 107 people on board crashed into a densely populated residential area near the Jinnah International Airport here on Friday, officials said, nearly a week after commercial flights were resumed on a limited scale amidst the COVID-19 pandemic in the country.

Flight PK-8303 from Lahore was about to land in Karachi when it crashed at the Jinnah Garden area near Model Colony in Malir, just a minute before its landing, they said.

The PIA Airbus A320 carrying 99 passengers and eight crew members has crashed landed into the Jinnah housing society located near the airport, a spokesperson of the state carrier said.

"The captain informed the air traffic tower he having problems with the landing gear before disappearing from the radar, he said.

There is no confirmation on casualties so far, but many are feared dead, Pakistani media reported.

President Arif Alvi expressed grief and sorrow over the loss of lives in the plane crash incident.

Prime Minister Imran Khan, while expressing deep sorrow over the loss of precious lives as a result of the PIA passenger plane crash in Karachi, has ordered an immediate inquiry into the incident.

Pakistan Army chief General Qamar Javed Bajwa condoled the loss of lives and directed the military to provide full assistance to the civil administration in rescue and relief efforts.

The flight PK 803 was coming from Lahore to Karachi after the Civil Aviation Authority (CAA) allowed limited resumption of domestic flights last Saturday following weeks of lockdown due to the coronavirus pandemic.

Television channels showed several houses and cars damaged in the society where the aircraft crashed.
Rescue and police officials confirmed that at least four bodies have been recovered from damaged houses so far while several injured people were also being taken to hospitals.

However, there were contradictory reports about the exact number of people on board the plane.
Senior Joint Secretary Aviation Sattar Khokhar told Pakistan Television that 99 passengers and eight crew members were on board but PIA spokesman Abdullah Hafeez said that there were 91 passengers and seven flight crew.
The plane lost contact with the airport at 2.37 PM (local time), Hafeez said, adding that it was too early to say about the technical problems faced by the plane.

It was not immediately known how many people were injured on the ground. Media reports showed that up to 10 houses and some vehicles were damaged.

Aviation Minister Ghulam Sarwar said that the landing gear of the plane was not working.

PIA Chairman Arshad Malik said that the pilot told the control tower about having a technical problem. The pilot was informed that two airports were available for landing he decided to go for a round and crashed.

The Pakistan Army and the Air Force have sent their teams for carrying out rescue and relief operations, the CAA said.

The PIA aircraft was flown by Captain Sajjad Gul.

A resident of the colony who witnessed the crash told Ary News channel that the aircraft had fire coming from its wings which crashed into rooftops of some houses before it crash landed.

"It is too early to say how many people have died in this tragic accident but... It will be a miracle if the passengers and crew members have survived this horrible landing," a senior police official said on condition of anonymity.

This is the first major aircraft crash in Pakistan after December 7, 2016 when a PIA ATR-42 aircraft from Chitral to Islamabad crashed midway. The crash claimed the lives of all 48 passengers and crew, including singer-cum-evangelist Junaid Jamshed.

"All my prayers are with the families. We will continue to provide information in a transparent manner," Hafeez said.

Footage showed plumes of smoke rising from the site of the crash. Ambulances and rescue officials arrived at the scene to help residents.

Pakistan Army Aviation helicopters have also flown for damage assessment and rescue efforts.
Minister of Health and Population Welfare has declared emergency in all major hospitals of Karachi after the incident.

The incident occurred on a day when Pakistan's interior ministry announced Eid holidays from May 22 to May 27.

The coronavirus cases in the country has crossed the 50,000-mark after a record 2,603 more patients were diagnosed. The deadly contagion claimed the lives of 50 people in the last 24 hours, taking the death toll to 1,067, the Ministry of National Health Services said.