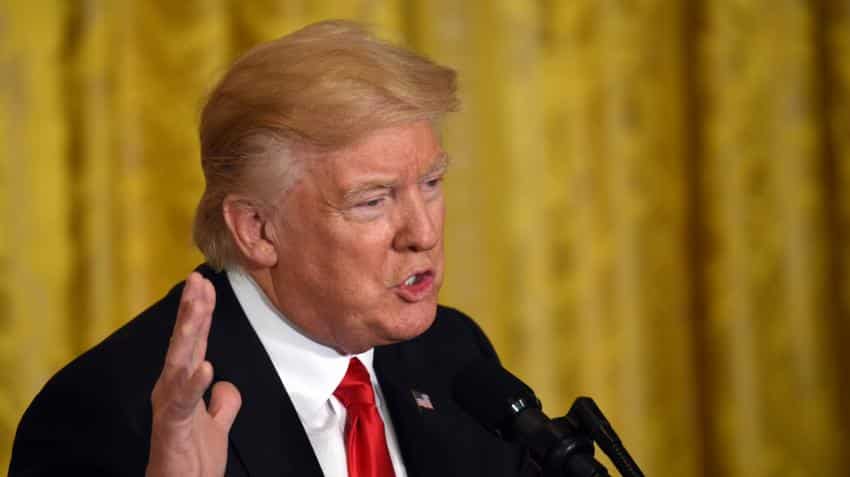 The damage inflicted on world stocks this week by the escalating war of words over North Korea topped $1 trillion on Friday, as investors again took cover in the yen, the Swiss franc, gold and government bonds.

With the tense mood pushing European shares down for a third day and Wall Street set to fall again, global stocks were on course for their worst week since Donald Trump won November`s U.S. presidential election.

Now installed in the White House, Trump issued a new warning to Pyongyang on Thursday that his previous promise to unleash "fire and fury" may not have been strong enough. North Korea had responded with a threat to land a missile near the U.S. Pacific territory of Guam.

Japanese markets were closed for a holiday but the yen powered on, hitting an eight-week high of 108.91 yen to the dollar, adding to its biggest weekly gain since May.

The yen tends to benefit during times of geopolitical or financial stress as Japan is the world`s biggest creditor nation and there is an assumption that Japanese investors there will repatriate funds should a crisis materialise.

The Swiss franc, the other traditional safety-play among currencies, has benefited too. Two weeks ago it saw its biggest weakly fall against the euro since the start of 2015. This week has seen its biggest rise since June 2016.

And in bond markets, 10-year U.S. Treasuries and Germany`s ultra-safe government bonds, known as Bunds, were trading at their highest prices since June.

"We do just not know what happens next with the North Korea situation," said BNY Mellon FX strategist Neil Mellor.

"For quite some time the market hasn`t really reacted to things on the Korean Peninsula because we know from the past it is largely North Korean sabre-rattling, and it may yet be. But with the rhetoric having gone to a different level, the market just can`t afford to take that risk."

Many world stock markets have hit record or multi-year highs in recent weeks, leaving them vulnerable to a sell-off, and the tensions over North Korea have proved the trigger.

The Chinese volatility gauge jumped by the most since January 2016, to its highest level in more than seven months. The euro zone`s version is at its highest since April, when France`s election was rattling the region.

Overnight, MSCI`s broadest index of Asia-Pacific shares outside Japan had skidded 1.55 percent, its biggest one-day loss since mid-December, to leave it down 2.5 percent for the week.

"What has changed this time is that the scary threats and war of words between the U.S. and North Korea have intensified to the point that markets can`t ignore it," said Shane Oliver, head of investment strategy at AMP Capital in Sydney.

"Of course, it`s all come at a time when share markets are due for a correction, so North Korea has provided a perfect trigger."
NEW CUBAN CRISIS?

The Korean won also continued to skid, down 0.45 percent to 1,147.2, falling below its 200-day moving average for the first time in a month.

Australian shares were down 1.3 percent, set for a weekly loss of 0.6 percent and Chinese and Hong Kong bluechips lost 1.6 percent and 1.9 percent respectively.

A Chinese state-run newspaper said on Friday that China should make clear that it will stay neutral if North Korea launches an attack that threatens the United States, but that if the U.S. attacks first and tries to overthrow North Korea`s government, China will prevent it doing so.

"This situation is beginning to develop into this generation`s Cuban Missile crisis moment," ING`s chief Asia economist Robert Carnell wrote in a note.

The market`s backstop safety asset, gold, edged up to its latest two-month high of $1,288 an ounce. It soared over 2 percent in the previous two sessions, and is set for a weekly gain of 2.25 percent.

Global benchmark Brent also fell 0.9 percent to $51.44, after Thursday`s 1.5 percent drop. It is poised to end the week down 1.9 percent. Copper, the bellwether industrial metal, was set for its first weekly drop in five weeks.

Away from the geopolitical drama, U.S. inflation data is due at 1330 GMT. The Korea tensions though have seen both U.S. and European markets this week push back expectations of when the Fed and ECB might hike interest rates.