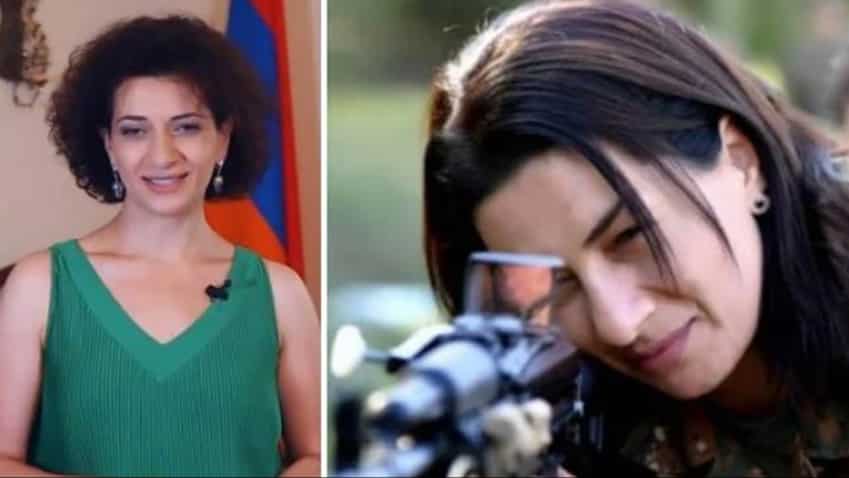 There are 13 women, including Armenian Prime Minister’s wife, in this squad who are preparing themselves to fight against Azerbaijan in disputed Nagorno-Karabakh area. (Pic: Zee news website/twitter)
Reported By: ZeeBiz WebTeam
Written By: ZeeBiz WebTeam
Edited By: Harish Dugh
RELATED NEWS

The situation between Armenia and Azerbaijan continues to escalate. It is learnt that Russia has sent its troops to help Armenia, implying the war is likely to further aggravate in the days to come. The situation is dire and it has caused even the Prime Minister's wife to pick up the gun to fight the enemy. Anna Hakobyan, wife of Armenian Prime Minister Nikol Pashinyan, has also started preparing herself for the worst.

Anna taking part in military exercises
Anna along with her friends has started taking part in difficult military drills. She is taking military training.  There are 13 women, including Armenian Prime Minister’s wife, in this squad who are preparing themselves to fight against Azerbaijan in disputed Nagorno-Karabakh area. This squad is being trained to fire rifles and other sophisticated weapons.
Enthusiasm in the Armenian Army
The decision of Anna to take part in military drills has boosted the morale of Armenian soldiers. 42-year-old Anna is staying like ordinary soldiers in the military cantonment. Recently, she had also warned Azerbaijan and said her country will not bow before an enemy in any case. Not only her, but Armenian Prime Minister’s 20-year-old son is also planning to volunteer in the fight.
Battle is on since September 27
Both countries are engaged in fight to take control of Nagorno-Karabakh area since September 27. So far, more than 5,000 people from both sides have lost their lives in this war as per the figure released by Russia. However, actual numbers are said to be far greater than what Russia has reported.

All three ceasefire talks failed
Three ceasefire talks have been held in this regard since October 10, however, on all three occasions, Armenia and Azerbaijan have started shelling on each other soon after reaching the agreement. Recently, American Foreign Minister Mike Pompeo have met foreign ministers of both the countries in Washington separately. Later, ceasefire was announced on humanitarian ground, however, both sides started firing on each other’s post minutes after the discussion.

Heading towards World war?
Continuous firing from Azerbaijan side and announcement made by Turkey to send its troops to help Azerbaijan has also alerted Russia. Russia President Vladimir Putin has deployed its border guards on Nagorno-Karabakh area on Armenia side. It is understood that if Turkey makes any other move to help Azerbaijan, it will have to face Russian Army. Russia has earlier warned that if something like this happens between the two countries, it will be very difficult to stop it from turning into a world war.