President Trump has put sanctions on oil trade with Iran, an important energy source for India. 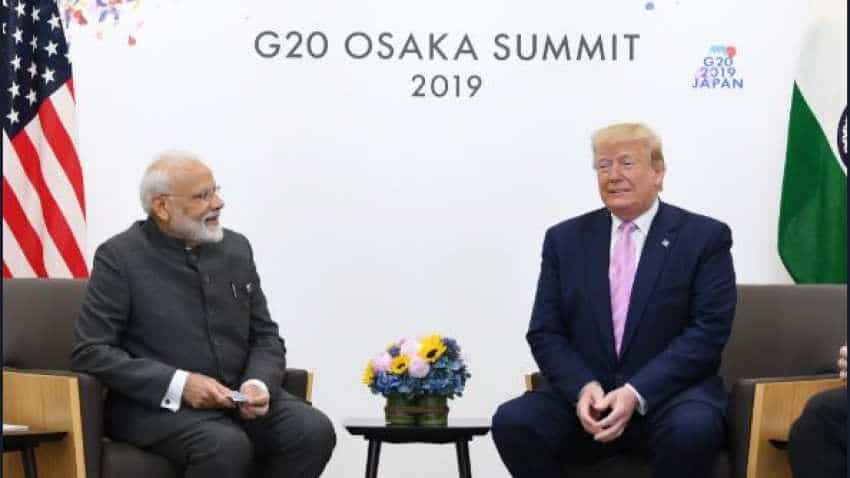 Modi said that US Secretary of State Mike Pompeo during his recent visit to New Delhi had delivered a "very warm letter" from Trump congratulating him on his recent re-election. Image source: Twitter/PIB
Written By: IANS
RELATED NEWS

US President Donald Trump on Friday said ahead of his meeting with Indian Prime Minister Narendra Modi that he thinks they will have a "very big trade deal to announce". Speaking to the media before the trilateral talks between him, Modi and Japanese Prime Minister Shinzo Abe on the sidelines of the two-day G-20 Summit here, Trump said: "I think we are going to have some very big things to announce. Very big trade deal.

"We certainly work together on trade and we`ll be discussing trade today... I think we will just continue to get along with India." Modi said that the key topics they would discuss include Iran, 5G, bilateral and defence relations.

Modi said that US Secretary of State Mike Pompeo during his recent visit to New Delhi had delivered a "very warm letter" from Trump congratulating him on his recent re-election.

"The hottest country in the world right now is the US and everybody wants to be a part of it," Trump said.

"We`re going to be discussing that and also how India fits in," Trump said when asked about Huawei, the Chinese telecommunications manufacturer that the US has placed restrictions because of its security considerations.

Trump has put sanctions on oil trade with Iran, an important energy source for India.

Asked about it, Trump said: "We have a lot of time, there`s no rush they can take their time. There is absolutely no time pressure. Hopefully in the end, it`s going to work out. If it does, great, if it doesn`t, you all be hearing shut it."

When the three leaders were asked to shake hands for a photograph, Trump initiated a three-way fist bump.

The meeting began after Trump and Abe had bilateral talks. A bilateral meeting between Modi and Trump will take place later in the day.