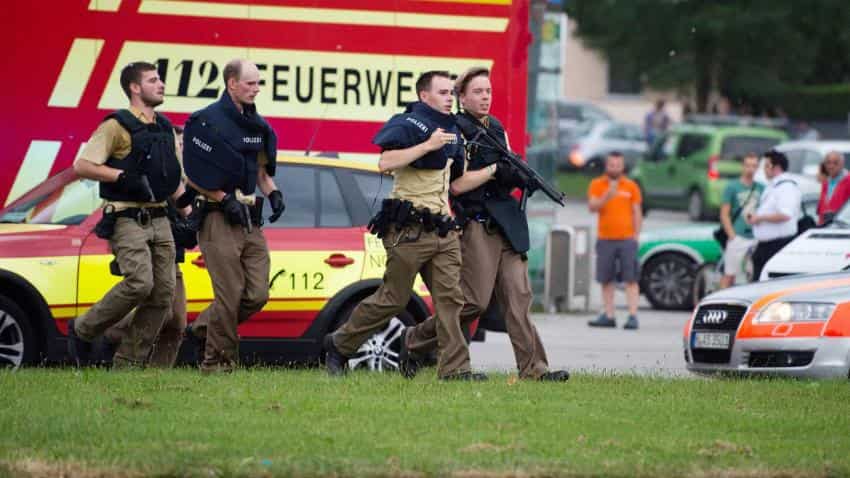 Policemen arrive at a shopping centre in which a shooting was reported in Munich, southern Germany, Friday, July 22, 2016. Photo: PTI
Written By: ZeeBiz WebTeam
RELATED NEWS

Shootings in a shopping mall in German city of Munich has left several dead and other injured.

According to Germany's Muencher Abendzeitung up to 15 people are reported to be killed, while German television NTV has reported 10 dead.

A Munich police spokeswoman says multiple people injured and killed in shooting at Munich shopping center, according to a Reuters alert.

The Munich police says believes more than one shooter involved and no one taken into custody yet, another alert said.

According to an AFP alert, three suspected gunmen are involved in shooting, says police.

The shopping center is next to the Munich Olympic stadium, where the Palestinian militant group Black September took 11 Israeli athletes hostage and eventually killed them during the 1972 Olympic Games.

This attack comes on the back of a 17-year-old asylum-seeker wounded passengers on a German train in an axe rampage which was claimed by terrorist group Islamic State. He had injured four people from Hong Kong travelling on the train and injured a local resident. He was later on shot down by German police.

German Justice Minister Heiko Maas told Bild newspaper`s Friday edition that there was "no reason to panic but it`s clear that Germany remains a possible target".

The incidents in Germany follow an attack in Nice, France, on Bastille Day in which a Tunisian drove a truck into crowds, killing 84. Islamic State also claimed responsibility for that attack.