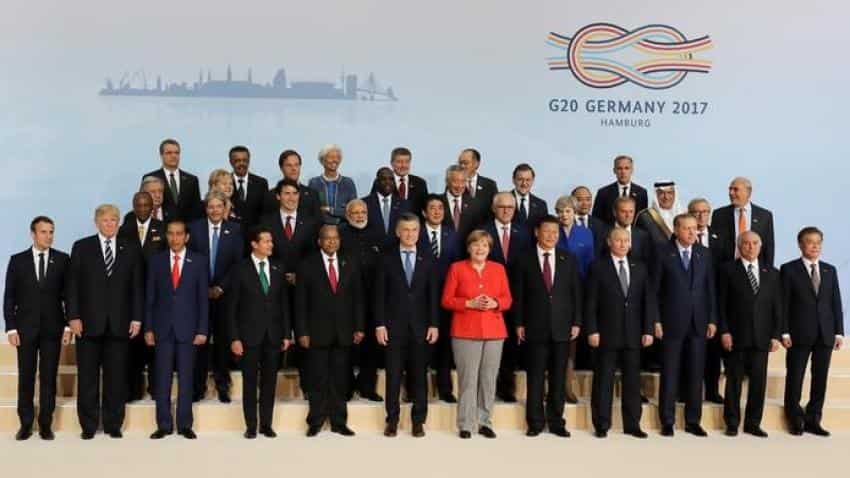 Moody`s Investors Service kept its forecast for G20 economic growth at just over 3 percent for this year and next, but warned of geopolitical risks, U.S. protectionism and spillovers from global monetary tightening and China`s deleveraging measures.

The ratings agency said surprisingly strong data in the first half of the year prompted it to raise 2017 growth forecasts for China to 6.8 percent from 6.6 percent, for South Korea to 2.8 percent from 2.5 percent, and for Japan to 1.5 percent from 1.1 percent.

It also expected the euro zone to accelerate in the rest of the year as suggested by robust sentiment indicators and revised upwards its forecasts for Germany, France and Italy.

The agency cut its forecast for the United States, however, to 2.2 percent in 2017 and 2.3 percent in 2018 from a previous 2.4 percent and 2.5 percent, respectively, citing its weaker-than-expected first half performance and expectations of more modest fiscal stimulus than previously assumed.

"The balance of risks is more favourable than it was at the beginning of the year," Moody`s said. "However, we note event risks related to conflicts in the Korean Peninsula, the South China Sea, and the Middle East."

"The test firing of missiles by North Korea, intensification of aggressive rhetoric on both sides, and a hardline stance from the Trump administration have raised the risk of a conflict in the Korean Peninsula."

The agency also said there appeared to be "renewed momentum" to address bilateral trade issues that the Donald Trump administration deemed as unfair trade practices, which could hurt growth if wide-ranging measures were introduced.

For markets, it warned of risks of increased volatility due to historically elevated asset prices and broad investor expectations that interest rates would remain low even as the Federal Reserve and the European Central Bank said they were preparing to start rolling back unconventional stimulus.

While raising its China forecasts, the agency warned the economy has become increasingly reliant on new debt to foster growth. The agency downgraded China`s ratings by one notch to A1 in May, saying the financial strength of the economy would erode in coming years.

The agency revised its India forecast slightly lower to 7.1 percent as the government`s demonetisation move last year led to several months of acute shortages for manufacturing and construction firms in particular, although it said it expected the impact to ease in coming months.