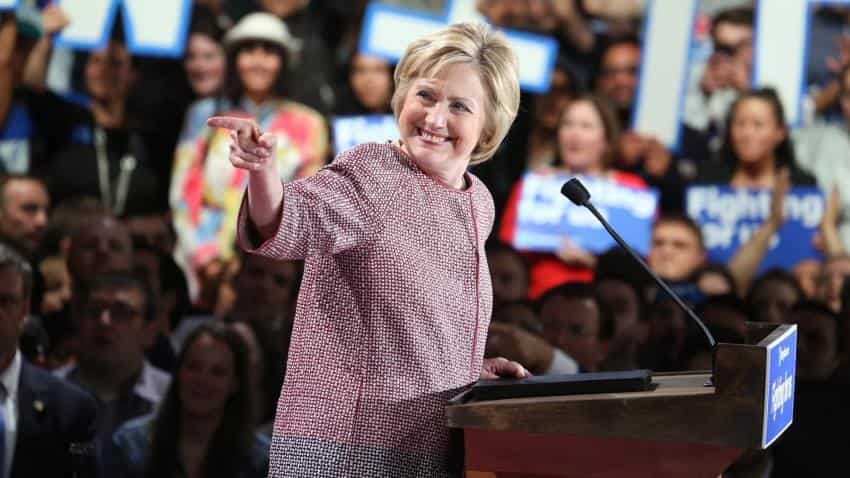 This is Clinton's second attempt to run for President after she lost the nomination to President Barack Obama in 2008. Photo:IANS
RELATED NEWS

Hillary Clinton was declared the official nominee for the Democratic Party in the upcoming presidential elections in the United States.

This is her second attempt to run for President after she lost the nomination to President Barack Obama in 2008.

However, Clinton was not the first woman to come close to running for office.

Here’s a list of 14 candidates that had sought to become President of USA at some point in America’s history as per a report by Rutgers’ Eagleton Institute of Politics.

1.    Victoria Claflin Woodhull (1872) - The first woman to run for United States President, Victoria Woodhull was the candidate of the Equal Rights Party.

She fought for women’s rights and founded her own newspaper. Victoria Woodhull is also known as ‘Wicked Woodhull.’ She became the first woman to own a Wall Street investment firm.

3.    Margaret Chase Smith (1964) - Smith was the first woman to have her name placed in nomination for President by a major party. She received Republican primary votes in many states and had twenty-seven first ballot votes at the Republican National Convention.

However, she removed herself from contention after the first ballot.

4.    Shirley Anita Chisholm (1972) - Chisholm was the first African American woman to seek a major party’s nomination for U.S. President. She campaigned throughout the country and was on the ballot in twelve primaries in what was largely an educational campaign. She received 151.95 delegate votes at the Democratic National Convention.

5.    Patsy Takemoto Mink (1972) - Mink, the first woman of Asian American descent to serve in the U.S. Congress, ran as an anti-war candidate in the 1972 Oregon Democratic presidential primary, winning two percent of the votes.

6.    Ellen McCormack (1976, 1980) - McCormack entered 20 state primaries for the Democratic presidential nomination in 1976 as an anti-abortion candidate, winning 22 convention votes. She became the first woman to qualify for federal campaign matching funds and qualified for Secret Service protection. In 1980, she ran for president again as the candidate of the Right to Life Party, winning more than 30,000 votes from three states.

7.    Sonia Johnson (1984) - Johnson ran on the ticket of the Citizens Party, receiving federal matching funds and winning more than 70,000 votes.

8.    Patricia S. Schroeder (1988) - Schroeder, a Democrat, made headlines when she took preliminary steps toward making a serious run for the presidency, but dropped out before the primaries because she could not raise the necessary funds.

11.   Carol Moseley Braun (2004) - Ambassador Carol Moseley Braun (D-IL) was among ten Democrats seeking the 2004 presidential nomination. Braun was born in Chicago, Illinois on August 16, 1947. She was the first African American woman to serve in the U.S. Senate. Appointed in 1999 by President Bill Clinton, Braun served as U.S. Ambassador to New Zealand.

12.    Michele Bachmann (2012) – Bachmann was a candidate for the Republican nomination for president; she won the Ames straw poll in August, 2011, but withdrew from the race after a disappointing showing in the Iowa caucuses. She became the first Republican woman from Minnesota elected to Congress in 2006 after serving in the State Senate from 2000-2006.

13.    Hillary Rodham Clinton (2008, 2016) - A graduate of Wellesley College and Yale Law School, Hillary Clinton served on the staff of the House Judiciary Committee considering the impeachment of Richard Nixon. She was elected to the U.S. Senate from New York in 2000 and re-elected in 2006.

The wife of former President Bill Clinton, she is the only first Lady of the United States ever elected to public office.

In 2010, she won the Republican nomination for the United States Senate in California, but lost the general election to incumbent Democrat Barbara Boxer.