The Premier League champions Manchester City confirmed Rodri's arrival to the club through a tweet and also confirmed that the 23-year-old will be wearing the Number 16 jersey. 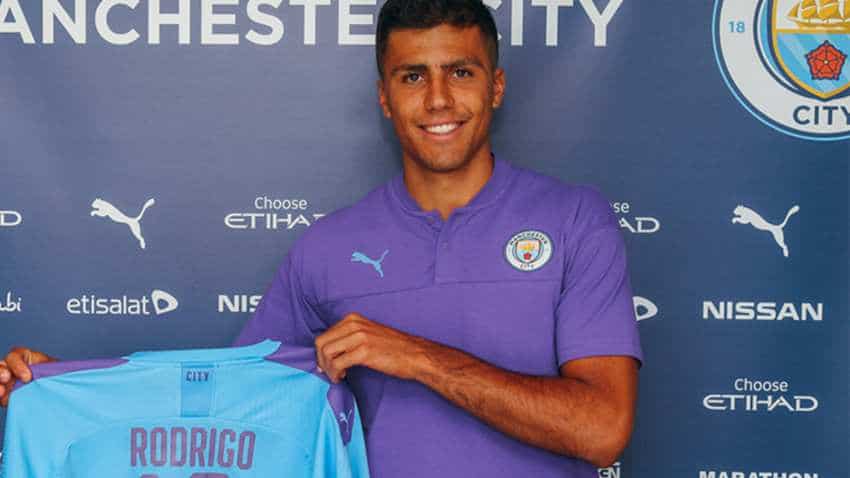 The big boys of Premier League have broken the bank once again, this time by signing Spanish international midfielder Rodri on a five-year deal from Atletico Madrid for a club record fee. The Premier League champions Manchester City confirmed Rodri's arrival to the club through a tweet and also confirmed that the 23-year-old will be wearing the Number 16 jersey. City have announced the signing a day after the La Liga club revealed the 70-million-euro (£63 million) release clause in Rodri's contract had been triggered. "Manchester City are delighted to announce the signing of Spanish midfielder Rodri," said a statement on the club’s website.

This means that the signing eclipses the reported £60 million City paid Leicester for Algeria international Riyad Mahrez last year, making Rodri the most expensive player in the club's history. The Spanish midfielder is excited to join the English champions and said that City's style of play excites him.

"What City have achieved in the last two years has been amazing and I’m looking forward to being part of such a talented squad. It’s not just the titles they have won, but the way they have managed it, playing attacking football at all times. It’s a style that excites me, as do the club’s ambitions," Rodri said.

His departure comes as a major setback for Atletico who have already lost Antonio Griezmann to Barcelona but at the same time secures a considerable profit. The Spanish club had spent around 20 million euros last summer to re-sign the Spaniard from Villarreal afer releasing him from their youth ranks. He made 47 appearances for Atletico, scoring three goals, as Diego Simeone’s men finished above Real Madrid in second in La Liga and won the UEFA Super Cup.

Meanwhile, Manchester City would hope that Rodri emerges as the long-term replacement for the influential Fernandinho. The Brazilian has been a key member of the squad that has won back-to-back Premier League titles under Pep Guardiola. But at 34, he is not getting faster. "Rodri has proven himself to be a hugely talented, young midfielder, who has all the attributes we are looking for," said City’s director of football Txiki Begiristain.

“He works hard defensively, makes himself available to receive the ball and uses it well when in possession. He is a perfect fit for Pep Guardiola’s team and we are confident he will be a success," he added.