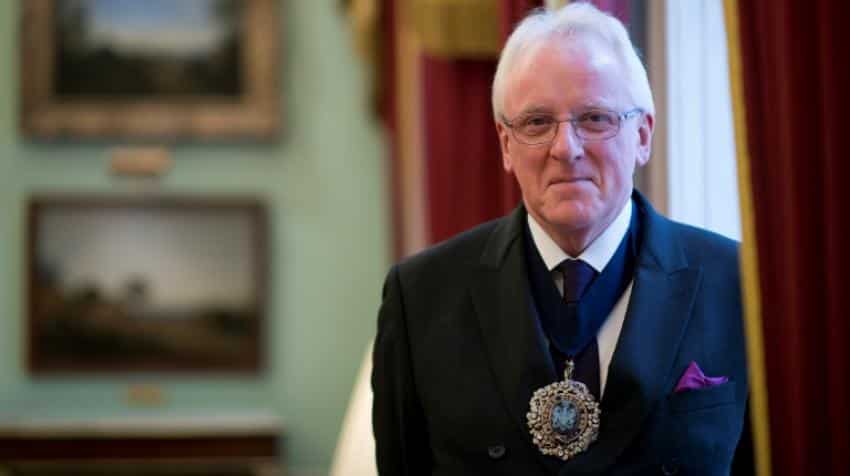 Speaking at his offices opposite the Bank of England (BoE), Andrew Parmley spoke of his concerns about attracting high-skilled workers and how city firms will be able to do business in the European Union (EU) after Britain leaves. Image Source: AFP
Written By: AFP
RELATED NEWS

The Brexit vote has shaken the city of London but will not destroy it despite creating uncertainty, the newly-installed Lord Mayor of the financial hub told AFP.

Speaking at his offices opposite the Bank of England (BoE), Andrew Parmley spoke of his concerns about attracting high-skilled workers and how city firms will be able to do business in the European Union (EU) after Britain leaves.

"Storms come around but we weather them every time," 60-year-old Parmley, the city's 689th Lord Mayor in eight centuries, said in an interview at his official residence Mansion House.

The Lord Mayors rule over the Square Mile, an area with 8,000 residents which every day hosts some 450,000 employees, mainly in the financial services sector.

Parmley officially took up the post on November 11 in an environment that he said presented "some challenges", following Britain's vote on June 23 to leave the EU.

The referendum result was a shock for the City, raising fears that it could lose its top-flight global status alongside New York.

The main concern for the City is the loss of passporting rights, a money-saving mechanism that allows financial products approved by a single regulator in a member state to be sold in the entire European Union (EU).

Losing this advantage could push some companies to move at least some of their activities to continental Europe in order to be able to continue to do business.

"Some businesses have undoubtedly made plans to relocate," Parmley said, although he added there have been no major announcements as "most people are still waiting".

Five months after the referendum, the government has not given any detail on its plan for future ties between Britain and the EU, except to say it wants British firms to have maximum access to the EU`s single market.

Prime Minister Theresa May has promised to invoke Article 50 of the EU`s Lisbon Treaty -- the formal procedure for leaving -- by the end of March.

Until then, patience will be of the essence.

"We'd like things to accelerate a little bit, we'd like greater clarity, greater certainty as to what the government is offering us," Parmley said.

City officials are working with the government "to test the water, to see the direction of travel", defending the interests of the 17,000 companies that operate in the City and Britain`s other main financial centres.

But Parmley admits it is "very unlikely" that passporting could be retained in its current form.

He hopes the government "can give us something that looks like passporting or we can find a way to ease business with our colleagues in Europe".

Another concern is about being able to attract the international mix of employees working for city firms.

London Mayor Sadiq Khan has talked about the possibility of special visas for the British capital, while Parmley said only that there had been talk of "a range of regional visas".

He said the city`s other "big concern" was over euro clearing -- an intermediary role between buyer and seller of financial products denominated in euros.

The business is estimated to account for 83,000 jobs in Britain, according to the Financial Times.

But Parmley said they could not compete in terms of infrastructure and London's draw as a place to live.

He was installed in a grandiose ceremony that brings crowds of tourists to the city every year, and he believes the city`s traditions will prove resilient in adversity.

And the outlook is not all downbeat. One scenario after Brexit, he said, was for the City to orient itself more at emerging markets "that we may have neglected".