"The planned 100 smart cities, the massive modernization of ports, airports and road and rail networks, and the construction of affordable housing for all by 2022 - the 75th anniversary of India`s independence - are not just promises of great urban renewal within India. 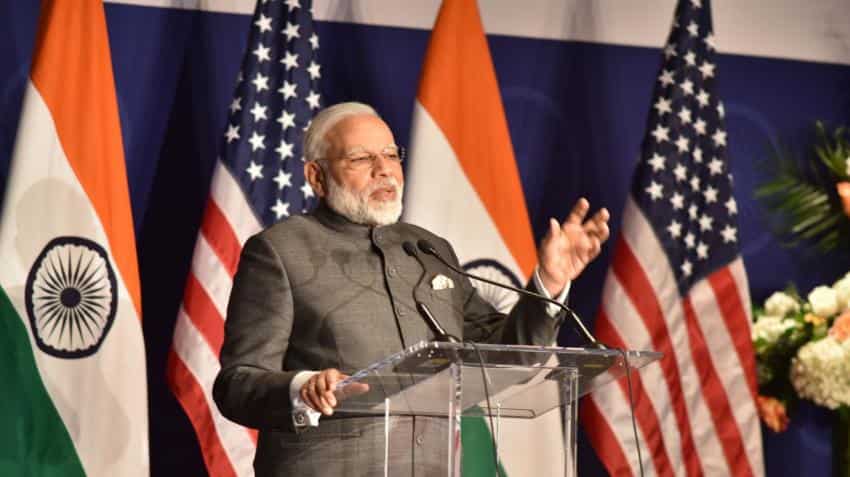 Saying both India and the US are determined to defeat the "scourge" of terrorism, Prime Minister Narendra Modi has said that "the logic of our strategic relationship is incontrovertible".

Modi, ahead of his meeting with President Donald Trump, also said in comments published in The Wall Street Journal that he expected bilateral ties in the next few decades to be "an even more remarkable story of ambitious horizons, convergent action and shared growth".

"The past two decades have been a productive journey of engagement for our mutual security and growth. I expect the next few decades to be an even more remarkable story of ambitious horizons, convergent action and shared growth," he said.

Modi recalled how he told the US Congress in June 2016 that the bilateral relationship had overcome the "hesitations of history". "A year later, I return to the US confident in the growing convergence between our two nations," he said.

"This confidence stems from the strength of our shared values and the stability of our systems. Our people and institutions have steadfastly viewed democratic change as an instrument for renewal and resurgence," Modi said.

He said the two countries stand as mutually reinforcing engines of growth and innovation in an uncertain global economic landscape.

Saying defence was another mutually beneficial sphere of their partnership, Modi said both India and the US had an overriding interest "in securing our societies, and the world, from the forces of terrorism, radical ideologies and non-traditional security threats.

The two countries, he said, were working together to address the existing and emerging strategic and security challenges that affect them in Afghanistan, West Asia, the large maritime space of the Indo-Pacific and the new and unanticipated threats in cyberspace.

"We also share an interest in ensuring that sea lanes - critical lifelines of trade and energy - remain secure and open to all," Modi said, without referring to the South China Sea by name.

Indo-US trade, which totals about $115 billion a year, was poised for a multi-fold increase, the Indian Prime Minister said.

"The transformation of India presents abundant commercial and investment opportunities for American businesses. The rollout of the Goods and Services Tax on July 1 will, in a single stroke, convert India into a unified, continent-sized market of 1.3 billion people," he said.

"The planned 100 smart cities, the massive modernization of ports, airports and road and rail networks, and the construction of affordable housing for all by 2022 - the 75th anniversary of India`s independence - are not just promises of great urban renewal within India," he said, adding, "These plans also showcase the enormous fruits of our relationships with enterprising US partners - worth many billions of dollars over the next decade alone - together with concomitant new employment opportunities across both societies."

"India`s rapidly expanding aviation needs, and our increasing demand for gas, nuclear, clean coal and renewables, are two significant areas of increasing convergence. "In coming years, Indian companies will import energy in excess of $40 billion from the US, and more than 200 American-made aircraft will join the private Indian aviation fleet," he said.

Modi said the combination of technology, innovation and skilled workers had helped forge an exciting digital and scientific partnership between the two countries.

"The creative and entrepreneurial energy of our engineers, scientists and researchers, and their free movement between both countries, continue to help India and the US retain their innovation edge and maintain competitiveness in the knowledge economy."

Modi underlined that whenever India and the US work together, the world reaps the benefits.

He also paid his tribute to the three-million-strong Indian-American community, "which represents the best of both our countries (and) has played a crucial role in connecting and contributing to our societies".