Trump backtracked this weekend on a threat to quarantine New York and neighbouring states while the CDC issued a travel advisory urging residents of New York City, New York State, New Jersey and Connecticut to avoid all nonessential travel for 14 days. 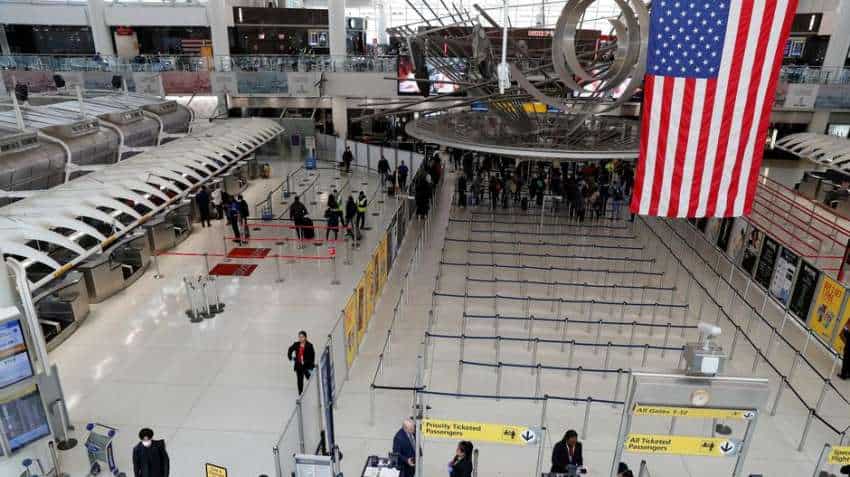 US president Donald Trump said that the grim numbers come from the "most accurate" study so far which landed on his desk Sunday, Photo: Reuters
Written By: IANS
RELATED NEWS

Sending out a dire warning, the White House on Sunday projected America`s peak death toll from the coronavirus is likely in two weeks coinciding with Easter weekend and in a worst case scenario, a total of 100,000 to 200,000 Americans could eventually succumb to the virus.

"It`s possible. It`s entirely possible that would happen if we don`t mitigate. What we`re trying to do is to not let that happen," America`s top infectious diseases doctor, Anthony Fauci said at a White House briefing in the Rose Garden on Sunday.

"In the model, there`s a large confidence interval. In that model, they make full assumption that we continue doing everything that we are doing and even better. We are hoping that the models aren`t completely right," Birx said.

At the same time, Fauci urged Americans not to get "overly anxious" about the extremes of the models. "Models are as good as the assumptions you put into it," Fauci said.

US president Donald Trump said that the grim numbers come from the "most accurate" study so far which landed on his desk Sunday.

Trump said, "2.2 million people would have died if we did not do the social distancing and all that. If we could hold that down to a 100,000 - it`s a horrible number - we`ve done a very good job."

Trump announced that the US is extending the social distancing guidelines currently in place till April 30.

Seeking to reassure Americans, Trump said, "By June 1, we will be well on our way to recovery."

By now, at least 1 in three Americans are under some form of government order to stay home and slow the spread of the virus. Schools have shut, businesses are operating with bare minimum staff and America`s neighbourhoods are enveloped in an otherworldly kind of silence.

The initial `15 days to slow the spread` guidelines issued by the Centers For Disease Control and Prevention (CDC) were announced on March 16. The guidelines are voluntary and many states which have emerged as COVID-19 hotspots have implemented stricter rules for locals.

Last week, Trump had talked up the "reopening" of the US economy by Easter Sunday which falls on April 12. Medical professionals reacted with alarm, warning that this timeline would be too soon.

Trump backtracked this weekend on a threat to quarantine New York and neighbouring states while the CDC issued a travel advisory urging residents of New York City, New York State, New Jersey and Connecticut to avoid all nonessential travel for 14 days.

In New York, which remains the epicenter of the outbreak, Governor Andrew Cuomo is saying that virus is spreading "like fire through dry grass". The White House task force has already warned that the effects of mitigation efforts and social distancing won`t be seen at least until the end of the coming week.

As Americans hunker down, Fauci has struck a cautiously upbeat tone saying he feels "confident" with all the knowledge now available on the virus. "We will have some sort of therapy, that gives at least a partial if not a very good protection in preventing progression of disease," he said this week. Randomised control trials are how the US is planning to get the best drug as quickly and safely as possible to the people.

As the White House task force gets more data from domestic cases, Birx noted that "we`re seeing things here that weren`t reported from other places."