An exoplanet more than twice the size of the Earth may have the right conditions to host life. 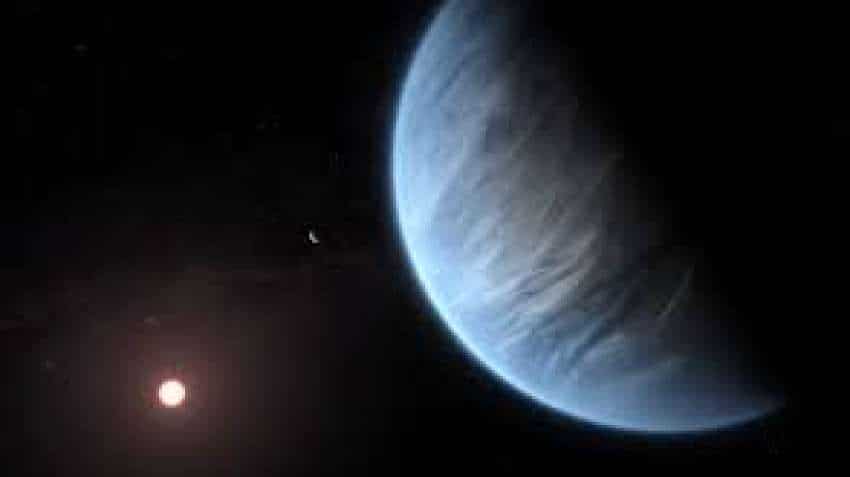 "Water vapour has been detected in the atmospheres of a number of exoplanets, but even if the planet is in the habitable zone, that doesn't necessarily mean there are habitable conditions on the surface," said Nikku Madhusudhan. Photo:Reuters
Written By: PTI
RELATED NEWS

An exoplanet more than twice the size of the Earth may have the right conditions to host life, say scientists led by an Indian-origin astronomer, opening the search for potentially habitable planets significantly larger than the Earth, but smaller than Neptune.

The researchers from the University of Cambridge in the UK used the mass, radius, and atmospheric data of the previously identified exoplanet K2-18b, which is 124 light-years away.

The study, published in The Astrophysical Journal Letters, determined that it is possible for the planet to host liquid water at habitable conditions beneath its hydrogen-rich atmosphere. K2-18b is 2.6 times the radius and 8.6 times the mass of Earth, and orbits its star within the habitable zone, where temperatures could allow liquid water to exist, the researchers said.

The planet was the subject of significant media coverage in 2019, as two different teams reported detection of water vapour in its hydrogen-rich atmosphere. However, the extent of the atmosphere and the conditions of the interior underneath remained unknown, they said.

"Water vapour has been detected in the atmospheres of a number of exoplanets, but even if the planet is in the habitable zone, that doesn't necessarily mean there are habitable conditions on the surface," said Nikku Madhusudhan from Cambridge, who led the new research.

"To establish the prospects for habitability, it is important to obtain a unified understanding of the interior and atmospheric conditions on the planet -- in particular, whether liquid water can exist beneath the atmosphere," Madhusudhan said.

Given the large size of K2-18b, it has been suggested that it would be more like a smaller version of Neptune than a larger version of the Earth.

A 'mini-Neptune' is expected to have a significant hydrogen 'envelope' surrounding a layer of high-pressure water, with an inner core of rock and iron, the researchers said. If the hydrogen envelope is too thick, the temperature and pressure at the surface of the water layer beneath would be far too great to support life, they said.

The new study showed that despite the size of K2-18b, its hydrogen envelope is not necessarily too thick and the water layer could have the right conditions to support life.

They used the existing observations of the atmosphere, as well as the mass and radius, to determine the composition and structure of both the atmosphere and interior using detailed numerical models and statistical methods to explain the data.

The researchers confirmed the atmosphere to be hydrogen-rich with a significant amount of water vapour.

They also found that levels of other chemicals such as methane and ammonia were lower than expected for such an atmosphere.

The researchers noted that whether these levels can be attributed to biological processes remains to be seen.

This allowed them to obtain the range of possible conditions in the interior, including the extent of the hydrogen envelope and the temperatures and pressures in the water layer.

"We wanted to know the thickness of the hydrogen envelope -- how deep the hydrogen goes," said Matthew Nixon, a PhD student at Cambridge University. "While this is a question with multiple solutions, we've shown that you don't need much hydrogen to explain all the observations together," said Nixon.

The researchers found that the maximum extent of the hydrogen envelope allowed by the data is around 6 per cent of the planet's mass, though most of the solutions require much less.

The minimum amount of hydrogen is about one-millionth by mass, similar to the mass fraction of the Earth's atmosphere, they said.

A number of scenarios allow for an ocean world, with liquid water below the atmosphere at pressures and temperatures similar to those found in the Earth's oceans, the researchers noted.

This study opens the search for habitable conditions and bio-signatures outside the solar system to exoplanets that are significantly larger than the Earth, beyond Earth-like exoplanets, they said.