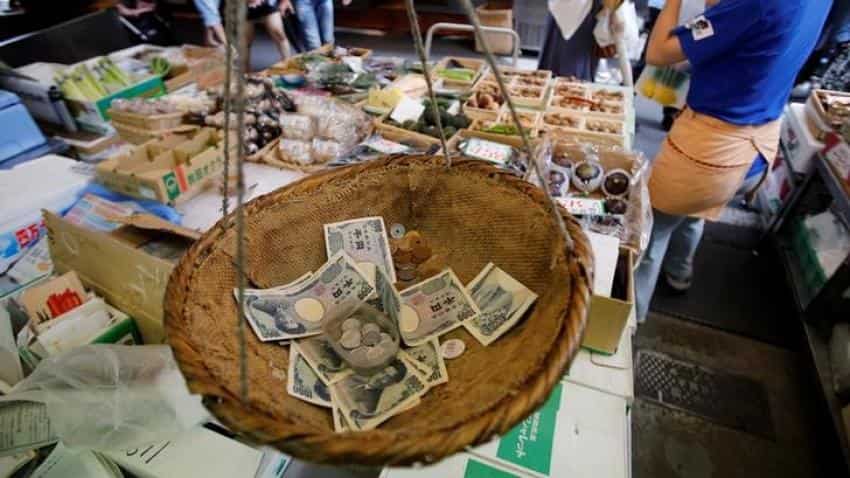 Coins and banknotes that are used for change are seen in a bamboo basket at a greengrocer in Tokyo
Written By: Reuters
RELATED NEWS

Japan`s core inflation accelerated in August, industrial output rose more than expected and demand for labour remained at its strongest in over 40 years in a further sign of solid momentum in the world`s third-largest economy.

The flurry of data should bolster optimism about the outlook for growth, though Prime Minister Shinzo Abe`s decision to call a snap election has raised some uncertainty over economic policy.

There was also some uneasiness about monetary policy after a summary of the Bank of Japan`s most recent meeting showed one board member wanted an expansion of stimulus as consumer prices remain distant from the central bank`s 2 percent inflation target.

"As long as Abe remains in power, we will see a continuation of his policies, but it all depends on the election."

Indeed, demand for labour remains at the strongest level since 1974 with data showing the jobs-applicants ratio held steady at 1.52 in August.

Manufacturers surveyed by the government expect output to fall 1.9 percent in September and then expand by 3.5 percent in October.

Politics, however, added a layer of uncertainty over the outlook for growth, with inflation still well behind the BOJ`s target.

Abe on Thursday dissolved the lower house and called a snap election for Oct. 22. Initially, his ruling coalition looked certain to retain its majority.

However, the outcome has been thrown into doubt because the largest opposition party has abandoned the election and will allow its members to run for a newly formed party that may be more popular with voters.

The summary of the BOJ`s rate review this month did not identify who spoke or what specific measures were proposed.

However, the central bank`s announcement after its Sept. 20-21 meeting showed board newcomer Goushi Kataoka, a vocal advocate of aggressive easing, dissented to the BOJ`s decision to leave policy unchanged, saying it is insufficient to meet the 2 percent inflation target.

Japan`s economy expanded at an annualised 2.5 percent in the second quarter as consumer and company spending picked up.

But price and wage growth remain weak with firms still wary of passing more of their profits to employees, forcing the BOJ to push back the timing for reaching its price target six times since deploying a massive stimulus programme in 2013.

The BOJ now expects inflation to hit 2 percent in the fiscal year ending in March 2020, arguing that a tightening job market and solid economic growth will gradually push up prices.

Friday`s data also showed core consumer prices in Tokyo, available a month before the nationwide data, were up 0.5 percent in September from a year earlier, matching a median market forecast.

Household spending rose 0.6 percent in August from a year earlier in price-adjusted real terms, but this was below the median estimate of a 1.0 percent increase and suggests that consumer spending is slowing slightly after a strong performance in April-June quarter.

"The labour market is tight and disposable income is rising. Consumer spending can remain on firm footing."