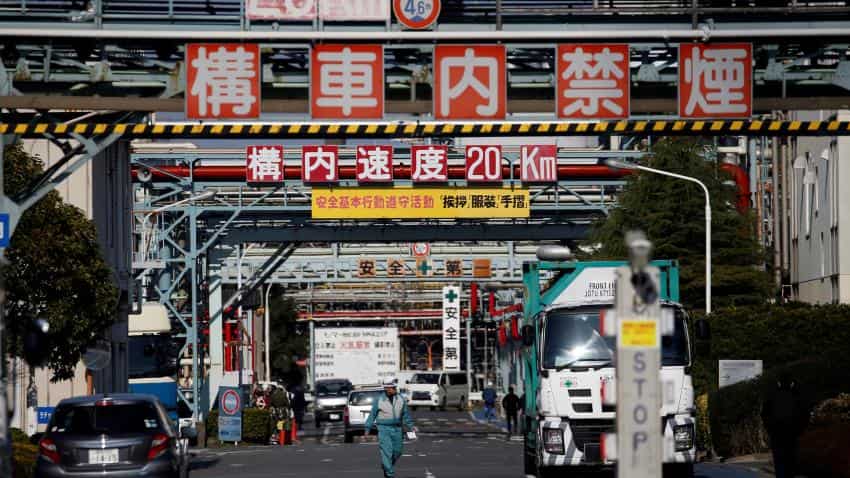 File photo of workers walk at a factory at the Keihin industrial zone in Kawasaki. Image source: Reuters
RELATED NEWS

Japan`s factories and retailers posted better-than-expected growth in activity in November, while minutes from the central bank`s last policy meeting showed board members raising the prospect of reducing stimulus.

The firm data and suggestions of a shift away from the Bank of Japan`s crisis-era policies on Thursday come as the outlook for the world`s third-largest economy goes from strength to strength.

Some BOJ board members are encouraging debate about raising rates or lowering purchases of exchange-traded funds in response to the improving outlook, a summary of opinions expressed at last week`s policy meeting showed.

If the outlook for prices and the economy is expected to improve the BOJ will need to consider whether "adjustments in the level of interest rates will be necessary," one board member said.

Another board member said the BOJ should examine the policy effects and the possible side effects of ETF purchases from "every angle" because of rising stock prices and earnings.

Japan`s growth this year has exceeded some economists` expectations, and its stock markets have rallied due to rising corporate earnings, causing some traders to question whether the BOJ should rein in its aggressive monetary easing.

"Consumer spending is doing well, supported by rising stock markets. The BOJ`s policy focus is on interest rates, so it is only natural to question its purchases of risk assets." said Hiroshi Miyazaki, senior economist at Mitsubishi UFJ Morgan Stanley Securities.

The summary of opinions does not identify individual speakers, and it is unclear whether a majority of the BOJ`s nine-person board shares these views.

Governor Haruhiko Kuroda said clearly last week that as long as consumer prices remain distant from the BOJ`s 2 percent inflation target he does not want to raise rates.

The BOJ buys long-term government debt to keep 10-year yields around zero and also buys ETFs, which are traded on the stock market, increasing its holdings by around 6 trillion yen ($53 billion) a year.

When the BOJ first launched ETF purchases in 2013, its argument was buying unconventional assets would lower risk premiums and help the economy overcome deflation.

Since then, Japanese stock prices have gained momentum and rallied around 20 percent this year.

Some traders argue that the BOJ`s ETF purchases artificially push up the prices of underlying shares, and that strong stock market gains this year mean these purchases are no longer warranted.

The 0.6 percent increase in industrial output in November was more than the median market projection for a 0.5 percent rise and followed a 0.5 percent gain in October.

The government raised its assessment of industrial output, saying it is recovering. Previously the government said output was only showing signs of a recovery.

Manufacturers surveyed by the Ministry of Economy, Trade and Industry expect output to rise 3.4 percent in December but fall 4.5 percent in January.

Japanese retail sales rose 2.2 percent in November from a year earlier, more than the median forecast for a 1.2 percent increase, government data showed on Thursday.

Japan`s economy recorded seven straight quarters of expansion in the third quarter, the best uninterrupted run of growth since 1994."We estimate that GDP growth will come to an annualised 0.7 percent quarter-on-quarter in Q4," economists at Barclays said in a research briefing.

"We note, however, that foreign demand could be higher than we are predicting given the results of recent indicators. We believe growth could reach a strong annualised pace of around 1.5 percent quarter-on-quarter, depending on economic data for December."