"3rd quarter GDP was a positive surprise, it should be a relief for Japanese policymakers," said Kohei Iwahara, an economist at Natixis Japan Securities. 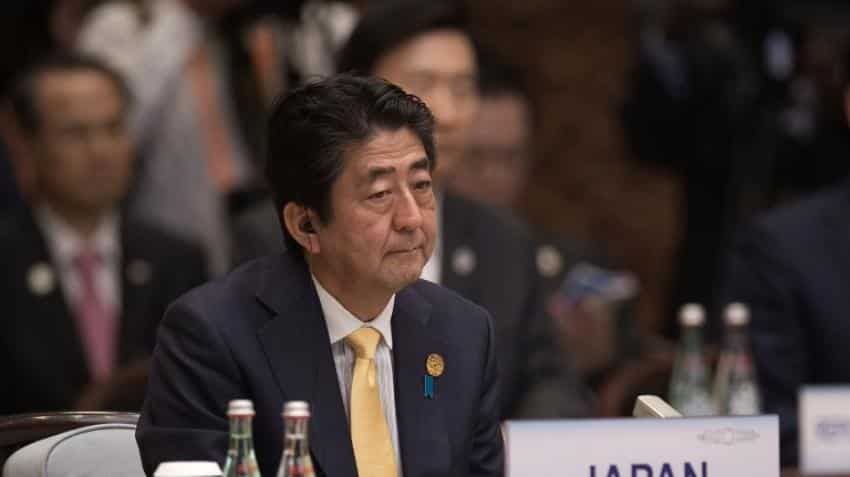 That handily beat market expectations for a 0.2 percent growth rate, or an annualised expansion of 0.8 percent.

Japan`s economy contracted in the last three months of 2015, before bouncing back in January-March with a 0.5 percent rise quarter-on-quarter and then a tepid 0.2 percent expansion in April-June.

But the yen, often bought as a safe haven in times of uncertainty, had been on the upswing since the start of the year, and got a big bump after Britain`s shock vote to exit the European Union.

It has recently weakened against the dollar after billionaire businessman Donald Trump`s election as US president, offering up some good news for Abe`s administration.

On Monday, the Japanese currency was around four-month lows against the greenback, brightening the outlook for exporters in the coming months.

"3rd quarter GDP was a positive surprise, it should be a relief for Japanese policymakers," said Kohei Iwahara, an economist at Natixis Japan Securities.

"However exports are making all the growth, mainly due to a pick-up in the Eurozone, so it could a one-off windfall.

"I would expect a slowdown in the 4th (quarter)."

There are concerns about the impact of Trump`s presidency, including the possible derailing of a trade pact that is pillar of Abe`s plans to revive growth, including kickstarting the export sector.

Trump has expressed strong opposition to the Trans-Pacific Partnership (TPP), a 12-nation agreement spanning some 40 percent of the global economy.

The US and Japan are the two biggest members, but the trade deal became a hot-button issue during the US election campaign, with critics including Trump saying it would cost American jobs.

It has been signed but is yet to be ratified by lawmakers in the US.

"There are many uncertainties," Iwahara said.

"For the yen, it could be positive as Trump has been critical about the Fed`s policy not to raise interest rates, but on a longer term (basis) US protectionist policies will be very negative for Japan."

Abe came to office in late 2012 and launched a growth plan -- a mix of massive monetary easing, government spending and red-tape slashing.

The programme sharply weakened the yen -- fattening corporate profits -- and set off a stock market rally that spurred hopes for a once-soaring economy caught in a deflationary spiral of falling prices and lacklustre growth.

But promises to cut through red tape have been slower, and Abe`s plan to buoy Japan`s once-booming economy have looked increasingly unrealistic.

His spend-for-growth policies have set Japan apart from some of its rich nation counterparts, including Germany, which has been reluctant to endorse them, seeing it as an ineffective way to stimulate the economy.

This month, Japan`s central bank again pushed back the timeline for hitting its inflation target, the latest policy change that has raised questions about its attempt to revive the economy.

The Bank of Japan has for more than three years embarked on a bond-buying stimulus programme to try to keep interest rates ultra-low and increase borrowing and spending.

But the bank said it now expects to hit two percent inflation by March 2019 -- four years later than its original target and the latest in a string of delays.

Covid Guideline: RT-PCR to be mandatory for travelers from these 5 countries — Check testing, quarantine guidelines for air passengers