Deep beneath the murky ocean, Paci breathes through a thin plastic tube as he dredges the seabed for tin, a vital component inside smartphones and tablets that`s brought riches and ruin to his island home. 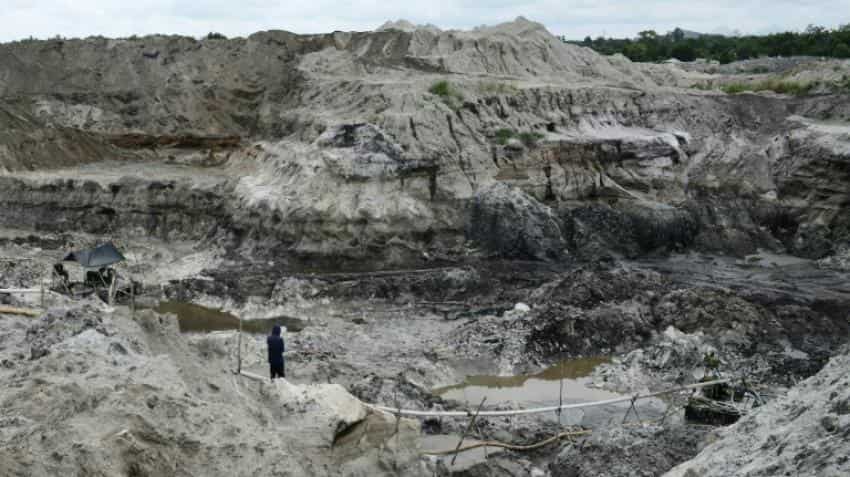 Deep beneath the murky ocean, Paci breathes through a thin plastic tube as he dredges the seabed for tin, a vital component inside smartphones and tablets that`s brought riches and ruin to his island home.

One-third of the world`s tin comes from the Indonesian islands of Bangka and Belitung, where thousands risk serious injury and death in the mines.

Demand for the metal ore has soared in recent years, driven by a voracious consumer appetite for the latest electronics gadgets.

In Bangka, the result has been a free-for-all -- both inland and now offshore. Many miners are unlicensed, sailing out in repurposed fishing boats in the hope of finding new deposits with little experience, and no protection.

Paci, who like many Indonesians goes by one name, earns USD$15 for a day`s work beneath the seas. Clad in goggles and a swimming cap he rakes a powerful hose across the sea floor, sending violent torrents of mineral-rich sand shooting to the surface.

"It is very dangerous work, and the risks are huge," he told AFP after surfacing, as the mining crew panned the dark sediment to separate fragments of tin.

He`s not alone. Dozens of dredging crews trawl off north-east Bangka, the same stretch of coastline where a 23-year-old miner drowned in October.

At least one miner dies every week in Bangka and Belitung according to estimates from the Indonesian Tin Working Group, an organisation comprised of electronics companies, tin firms, industry bodies, and activists.

A four-man operation can fetch 30 kilograms of tin ore on a good day, another sea miner told AFP.

It passes through many hands before arriving at smelters, which export the refined product used in the solder binding the components of tech gadgets.

Half of all mined tin is transformed into solder for the electronics industry, data from industry group ITRI shows, making the brands behind best-selling laptops and flat-screen televisions a powerful force in the global market.

While there is obvious damage to the environment, and miners have lost their lives, tin from Indonesia is considered "conflict free" and so there are no trade restrictions on its use.

But as the negative impacts on the land, and to local communities are revealed, electronics firms have come under pressure to properly account for the provenance of the minerals they use.

Evert Hassink from Friends of the Earth Netherlands says companies have done little to ensure the tin they used in their gadgets was not harming Bangka.

"Companies don’t even know what they are sourcing," he said.

"They refuse to really stick out their necks and dive into the supply chain."

Ten major tech manufacturers -- including Apple, Samsung, Microsoft and Sony -- are members of the tin working group, which has pledged to support less harmful mining practises on Bangka.

Apple said in a statement it had spent "thousands of hours" in Indonesia in a bid to improve the situation for workers and the environment.

It added: "Suppliers who are unwilling or unable to comply with our standards will be removed from our supply chain."

A spokesman for Samsung said the firm was "committed to continuously evolving our efforts on responsible mineral sourcing".

A representative for the tin working group said it had two pilot projects aimed at improving worker safety and restoring land degraded by mining in development.

Jabin Sufianto, president of the Association of Indonesian Tin Exporters, acknowledged some tin firms were apprehensive about committing further but believes things will change over time.

"What’s important now is doing the pilots, so we can show there is progress and it’s not just all talk," he told AFP.

But Retno Budi from Walhi, a conservation group that has mobilised huge rallies against tin mining, is sceptical.

Inland from Sungai Liat, a giant pit mine stretches as far as the eye can see, one of the treeless, pockmarked scars visible from a flight over the island.

"They say they`re restoring the land -- I`m yet to see it," he told AFP, surveying the ruined landscape.

"To this day there’s been almost no effort to fix anything whatsoever.”

Just weeks earlier two miners died in a landslide at the mine, he said.

Nazaruddin earns less panning for tin, a backbreaking job under the blistering sun, but avoids the dangers of pit mining.

“Over there, they don’t think about safety," he told AFP, gesturing to a crew blasting sand and rock below a steep cliff.