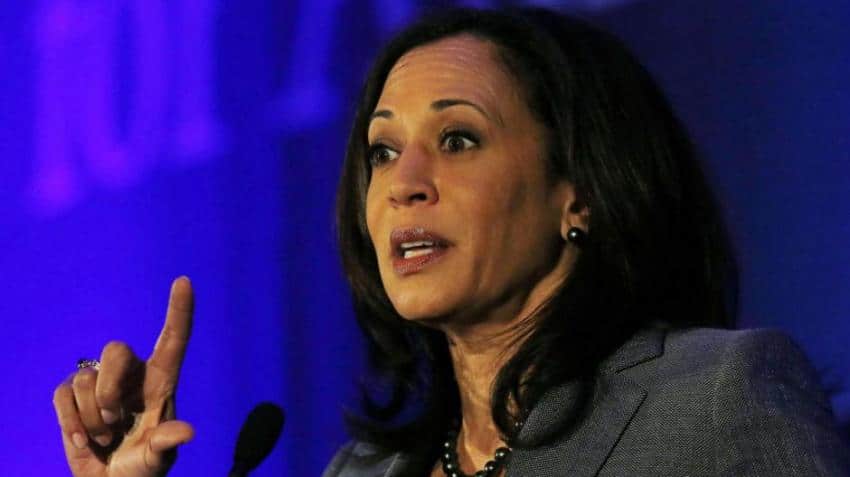 Harris, the daughter of an Indian mother and a Jamaican father, is the first-ever Indian-American to be elected to the US Senate. Image Source: Reuters

Besides Harris and Haley, Indian-origin stand-up comedian Hasan Minhaj has also made it to the list which recognises a remarkable range of individuals who have found ways to exert enormous influence, often in unexpected ways, on a wide range of issues.

"They are the doers who defined 2017," said Foreign Policy while releasing its annual list of global thinkers, which this year number 50 instead of 100 as was mostly the case in previous years.

Topping the list is Harris, 53, for giving the Democratic Party hope in the era of President Donald Trump, the magazine said.

Harris, the daughter of an Indian mother and a Jamaican father, is the first-ever Indian-American to be elected to the US Senate.

Seen as a potential Democratic presidential candidate, Harris is the only black woman in the Senate.

"Her professional bona fides and two decades as a prosecutor, her commitment to social justice (she has made immigrants' rights and bail reform the focus of her first year in office), and her personal 'firsts' make her appealing to voters still smarting from (Hillary) Clinton's loss and hungry for a charismatic non-white, non-male presidential candidate," the magazine said.

Popular comedian Minhaj, 32, is placed third in the ranking for defining the narrative of a "New Brown America", it said.

Early this year he was the first Indian-American to have been chosen to host the White House Correspondents Dinner.

"The final comedian to be hired by The Daily Show during Jon Stewart's tenure as host, Minhaj has since joined an elite cadre of popular news satirists including Stewart, Trevor Noah, Stephen Colbert, Samantha Bee, and John Oliver,whose joyful embrace of 'fake news' often gets at fundamental truths at which the mainstream media can only gesture," it said.

Former South Carolina governor Haley, 45, the first Indian-American to be a member of any presidential cabinet, figures in the list of global thinkers for trying to preserve America's traditional vision of international affairs, said the magazine.

"The US foreign policy that Haley has spent just over 10 months defending smacks more of traditional Republican (and, arguably, traditional US) policies more closely in line with Ronald Reagan than with the current president," it said.

Among others in the list are presidential candidate for the FARC, the Colombian rebel group that has traded its weapons for party politics, the female director of Afghanistan's foreign-language film contender for the Oscars, the venture capitalist who is using tech companies to bridge the gap between Israel and Palestine, and an Iraqi member of parliament who is demanding her country recognise the genocide of the minority Yazidis.

"This year's list showcases a remarkable range of individuals who have found ways to exert enormous influence, often in unexpected ways, on a wide range of issues ? from North Korea policy, to the rise of populism, to how we combat fake news, to cementing a new narrative in American culture... to comedy," said Jonathan Tepperman, editor-in-chief of the magazine.

"These amazing people are not only rethinking our world, but also reshaping it. They defined 2017, and we're thrilled by the chance to recognise their accomplishments ? for good, at least in most cases," he said.