A First Secretary in India`s UN Mission, Bayyapu said: "The truth is that the delegation represents a geographical space that is now widely known as the hub of terrorism that has jeopardized innocent lives in our region and beyond." 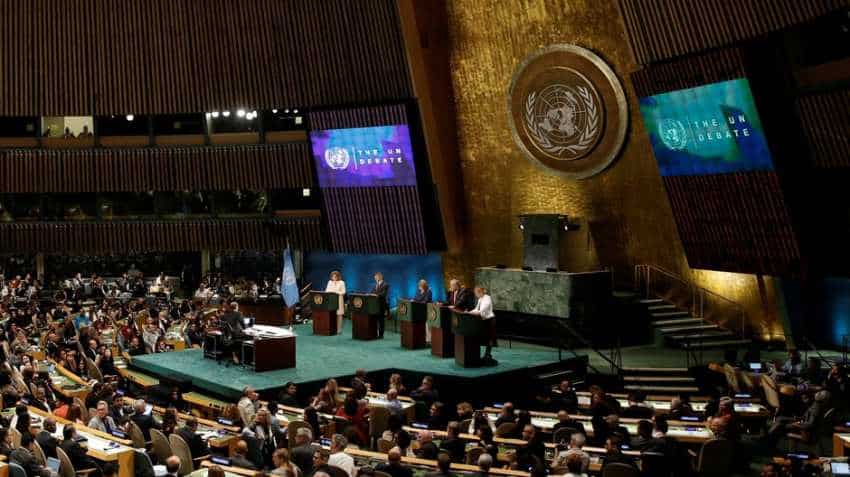 India is seeking a reform of the Council that would expand the permanent membership to include it and other countries, especially from Africa, to reflect the 21st century realities. Image source: Reuters
Written By: IANS
RELATED NEWS

Calling it "the hub of terrorism", India has dismissed Pakistan`s attempts to raise the Kashmir issue in the UN General Assembly after it had failed to get a hearing in the Security Council. Pakistan was attempting "to misuse this forum to spread baseless and deceitful narratives about my country", Indian diplomat Sandeep Kumar Bayyapu said on Thursday at the General Assembly debate on the Security Council`s annual report.

"Such attempts have not succeeded earlier and will not succeed now," he said.

A First Secretary in India`s UN Mission, Bayyapu said: "The truth is that the delegation represents a geographical space that is now widely known as the hub of terrorism that has jeopardized innocent lives in our region and beyond."

He declined to go into a point-by-point rebuttal of the statement made earlier by Pakistan`s Permanent Representative Maleeha Lodhi, saying: "We do not wish to dignify such baseless diatribes with a response."

Bayyapu devoted his speech to the working of the Council and its relationship to the Assembly.

"Many of the flaws in the functioning of the Council are structural," he said.

"Like most others, we remain convinced that the only remedy is a comprehensive reform of the Security Council, involving expansion in its permanent and non-permanent categories."

Bayyapu said that the Council`s "composition is demonstrably out of touch with ground realities" as it "neither reflects nor represents the aspirations and views of the larger membership".

The 15-member Council is dominated by five veto-wielding permanent members, three of them from Europe.

India is seeking a reform of the Council that would expand the permanent membership to include it and other countries, especially from Africa, to reflect the 21st century realities.

Lodhi was critical of the Council, accusing it of actively pursuing some resolutions while ignoring others.

Referring to the Council`s resolution on Kashmir, she said: "As elsewhere, when the Council fails to implement its own resolutions, the price for this failure is paid, in blood, by generations of innocent people."

Islamabad, however, failed to abide by the resolution.

Forcing the implementation of Resolution 47 of 1948 that calls for a plebiscite, would require the Council to make Pakistan withdraw from the parts of Kashmir it occupies.

The resolution made it a first condition that Pakistan pull out of Kashmir all its troops and those it sent in disguised as "tribesmen". Only after Pakistan had complied with that requirement would India be required to scale back its military presence, while being allowed to maintain some for defence.

Pakistan has not been able to address the Council directly on the Kashmir issue and its request for an open session has been turned down.

Lodhi now tried to address the Council at the Assembly.

She said: "The Security Council must act, by demanding India to lift the curfew and end the communication blackout, allow the people to exercise all their rights including the right of peaceful assembly; release all those detained and all political prisoners; halt human rights violations, including the use of force against unarmed demonstrators, and use of pellet guns and live ammunition."

The August 16 Council consultations on Kashmir held at China`s behest were a closed-door affair and Pakistan could not attend it.