India Saudi Arabia Trade: India and Saudi Arabia inked the Strategic Partnership Council Agreement to elevate their ties to the next level. 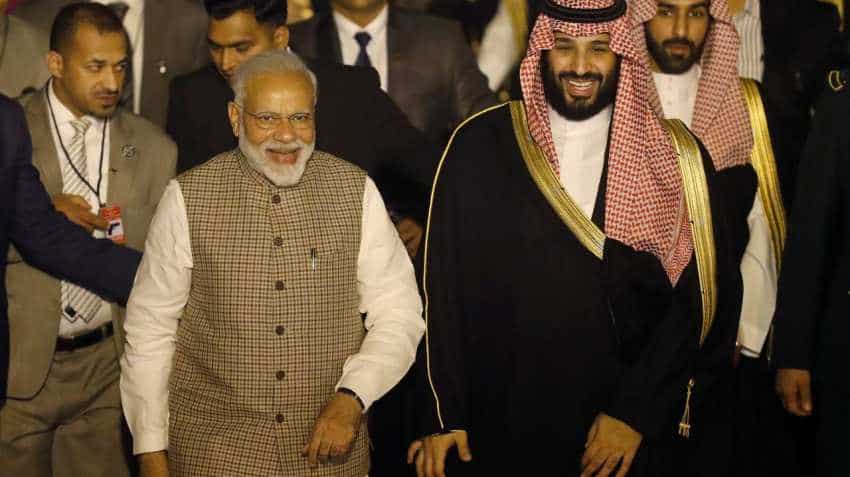 India Saudi Arabia Trade: India and Saudi Arabia inked the Strategic Partnership Council Agreement to elevate their ties to the next level, even as both sides signed 11 other deals, including in energy and security cooperation and defence production, after bilateral talks between visiting Indian Prime Minister Narendra Modi and Saudi Crown Prince Mohammed bin Salman in Riyadh.

"In a significant up-gradation of the strategic partnership, PM@narendramodi and Saudi Crown Prince Mohammed bin Salman sign the Strategic Partnership Council Agreement," MEA spokesperson Raveesh Kumar tweeted, linking a video of the signing of the agreement between Modi and the Saudi Crown Prince. Earlier, the two leaders held bilateral talks.

The other agreements between the two sides, inked by their respective officials, were on cooperation in the field of renewable energy, on security cooperation, on combating illicit trafficking and smuggling of narcotic drugs, psychotropic substances and chemical precursors and in the field of defence - on collaboration in military acquisition, industries, research, development and technology.

Another MoU was on collaboration in civil aviation, in medical products regulations, a Letter of Intent between Small and Medium Enterprises General Authority (Monshaat) of the Saudi Arabia and Atal Innovation Mission (AIM), NITI Aayog,A a cooperation Programme between the Foreign Service Institute, and Prince Saud Al Faisal Institute of Diplomatic Studies (IDS).

Another agreement was between Indian Strategic Petroleum Reserves Limited (ISPRL) and Saudi Aramco.

Gratuity calculation formula, method online 2019: This is how it is done in CTC, see example through chart - All you need to know

Budget 2020 My Pick: Time to do bumper earning before budget day, this share will give you high returns