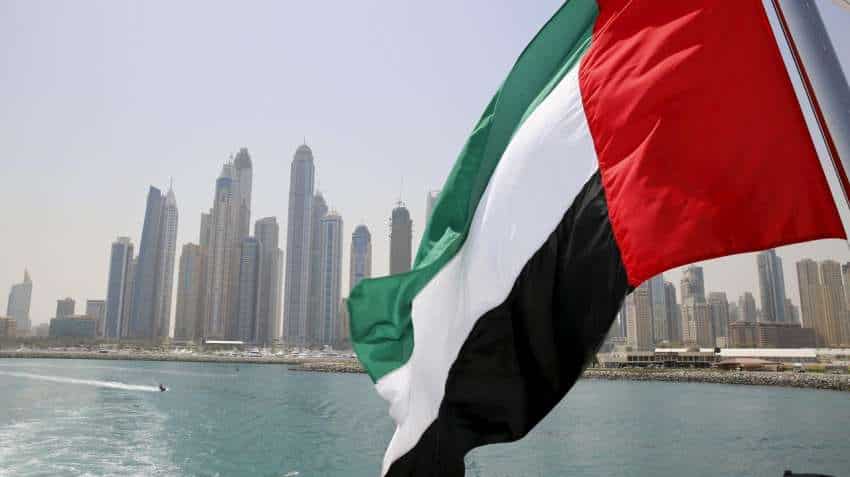 Israel and the UAE spoke today and agreed to the full normalisation of relations between Israel and the United Arab Emirates, Photo: Reuters
Written By: PTI
RELATED NEWS

In a major diplomatic breakthrough, the UAE on Thursday became the first Gulf country and the third in the Arab world to establish diplomatic relations with Israel as part of a deal to halt the controversial annexation of parts of the West Bank that Palestinians see as a part of their future state.

A White House announcement said that the leaders of the US, Israel and the UAE spoke today and agreed to the full normalisation of relations between Israel and the United Arab Emirates.
Israeli Prime Minister Benjamin Netanyahu, who has often boasted about Israel's close relations with states in the Arab world under his leadership, even without normalised ties, tweeted minutes later simply saying, "Yom Histori" (Historic Day) in Hebrew.

UAE's ruler, Sheikh Mohammed bin Zayed Al Nahyan, was a bit guarded in his Twitter message saying The UAE and Israel also agreed to cooperation and setting a roadmap towards establishing a bilateral relationship, highlighting that "an agreement was reached to stop further Israeli annexation of Palestinian territories".

Netanyahu in a nationally broadcast statement said the move ushered in a new era in Israel's relations with the Arab world.

He said Trump administration has asked Isrel to put its West Bank annexation plans on hold.

He said the plans were on temporary hold and that implementing annexation would be done with US coordination.

A joint statement from the United States, Israel and the UAE said that "this historic diplomatic breakthrough will advance peace in the Middle East region and is a testament to the bold diplomacy and vision of the three leaders and the courage of the United Arab Emirates and Israel to chart a new path that will unlock the great potential in the region".

Close neighbours, Jordan and Egypt, are the only two other Arab states to have diplomatic ties with Israel under peace agreements that have weathered several storms over the decades to hold firm.

Many believe that the big diplomatic breakthrough is going to politically boost Trump's electoral prospects and also strengthen Netanyahu as he battles regular protests calling for his resignation due to the corruption trial against him and failure in the proper handling of the coronavirus crisis.

According to the joint statement, delegations from Israel and the UAE will meet in the coming weeks to sign bilateral agreements regarding investment, tourism, direct flights, security, telecommunications, technology, energy, healthcare, culture, the environment, the establishment of reciprocal embassies, and other areas of mutual benefit.

The statement also said that, as a result of this diplomatic breakthrough and at the request of President Trump with the support of the UAE, Israel will suspend declaring sovereignty over areas outlined in the President's Vision for Peace and focus its efforts now on expanding ties with other countries in the Arab and Muslim world.

Netanyahu had previously planned to annex parts of the Israeli occupied West Bank, viewing the White House's plan released in January as an opportunity to extend Israeli sovereignty to parts of the disputed territory.

In recent months, UAE officials have been vocal in warning Netanyahu against plans to annex much of the West Bank and Jordan valley.

UN, Arab and European officials warned that the move would effectively end any hope of a two-state solution with an independent Palestine that has East Jerusalem as its capital.

Under the deal, the UAE and Israel will also immediately expand cooperation on the treatment of and the development of a vaccine for the coronavirus.

Working together, these efforts will help save Muslim, Jewish, and Christian lives throughout the region.

There has been speculation about the normalisation of ties since the UAE attended the January White House reception during which President Trump presented his Vision for Peace, and expressed appreciation for the UAE's related supportive statements.

The parties will continue their efforts in this regard to achieve a just, comprehensive and enduring resolution to the Israeli-Palestinian conflict, the statement said.

"As set forth in the Vision for Peace, all Muslims who come in peace may visit and pray at the Al Aqsa Mosque, and Jerusalem's other holy sites should remain open for peaceful worshippers of all faiths,? said the statement.

Opening direct ties between two of the Middle East's most dynamic societies and advanced economies will transform the region by spurring economic growth, enhancing technological innovation, and forging closer people-to-people relations, it said.

Describing it as a historic day, US Secretary of State Mike Pompeo said that it is a significant step forward for peace in the Middle East.

The US hopes that this brave step will be the first in a series of agreements that ends 72 years of hostilities in the region, Pompeo said.