Airlines including Cathay Pacific have asked passengers to postpone non-essential travel from Hong Kong and not proceed to the airport unless they have a confirmed booking. 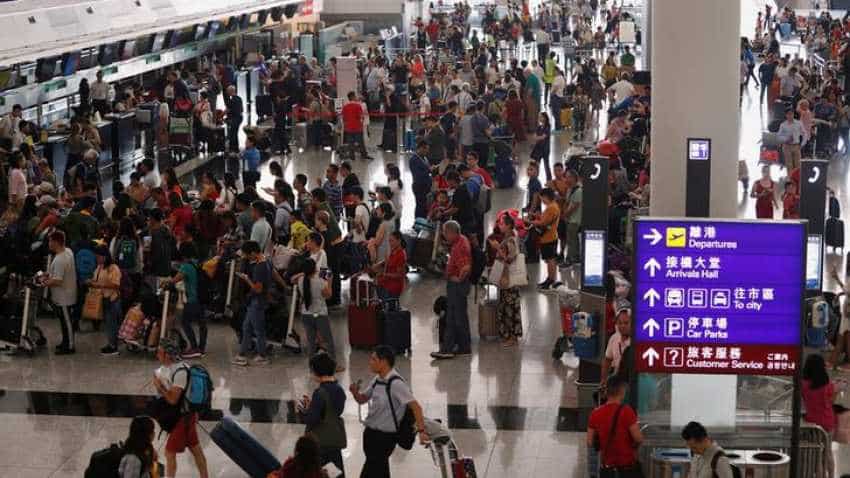 At least 180 outbound flights have been cancelled, the airport said in a statement on its website. Image source: Reuters

Almost 200 flights out of the Hong Kong International Airport (HKIA) were cancelled on Tuesday, a day after thousands of anti-government protesters swarmed into one of the terminals of the airport, one of the world`s busiest, causing massive disruption and flight cancellations.

At least 180 outbound flights have been cancelled, the airport said in a statement on its website. "Hong Kong International Airport will implement flight rescheduling today (Tuesday) with flight movements expected to be affected," Efe news quoted the statement as saying. "Please confirm the flights before heading to the airport," it added.

Airlines including Cathay Pacific have asked passengers to postpone non-essential travel from Hong Kong and not proceed to the airport unless they have a confirmed booking.

Meanwhile, scenes of long lines and crowds continued to be seen on Tuesday morning at the airport, which struggled to recover from the protests a day earlier, during which demonstrators sought to draw attention to what they consider police brutality while trying to disperse protests in the city.

However, by Tuesday morning, only a few protesters could be seen remaining inside the airport`s terminals.

This development comes after the city witnessed the 10th consecutive weekend of demonstrations sparked off by the government`s controversial extradition bill that was later shelved by Hong Kong Chief Executive Carrie Lam after coming under intense popular pressure.

The controversy surrounding the now-defunct extradition bill, which would have enabled fugitives to be transferred from Hong Kong to mainland China to stand trial under the latter`s opaque legal system, has morphed into a broader movement seeking to reverse a decline in freedoms in the ex-British colony.

However, violence between the police and some of the demonstrators has been on the rise with the succession of protest marches.

On Sunday, an unknown number of police officers were injured after protesters threw Molotov cocktails at them.

A former British colony, Hong Kong passed to Chinese sovereignty in 1997, although it still retains a degree of independence from Beijing.

According to the handover deal between London and Beijing, this political system - which includes certain legal freedoms not recognized in mainland China - must be preserved until 2047.

But many protesters viewed the controversial extradition bill - which was declared "dead" by the Hong Kong government in early July - as an attempt by China to meddle in Hong Kong`s affairs.